Although not built originally for McAllister Brothers, C.W. Morse was one of the more innovative vessels of its time, and put to good use by the company.

The sea-going tugboat was a giant "high seas" tug, one of the largest tugboats in the Atlantic at the time, measuring 154-ft (46.9-m) with a steam engine that generated 1,050 hp. She was built in Bath, Maine for the Kickerbocker Ice Company in 1889 to compete with schooners in the ice trade, and was truly a pioneer of the tug-barge combination.

The vessel was bought from Cornell Towing in 1912 and formed the West India Trading Co. as a joint venture.

It was decided to employ the vessel to tow a massive barge loaded with molasses between Cuba and New Orleans, an endeavor that proved very profitable.

Four coal-passers shoveled coal to fuel the Morse's furnace while and four oilers and an engineer maintained the tug's massive engine as she plowed through the seas between Havanna, Cuba and New Orleans. Condensors recycled steam, freeing the tug of the need to have daily access to freshwater supply.

Both the tug and her barge, on March 7, 1914 by account of Captain Jim McAllister's journal, were equipped with a wireless telegraph in case the hawser should break, as the Marconi Company had introduced wireless telegraphy to American shipping in 1904. 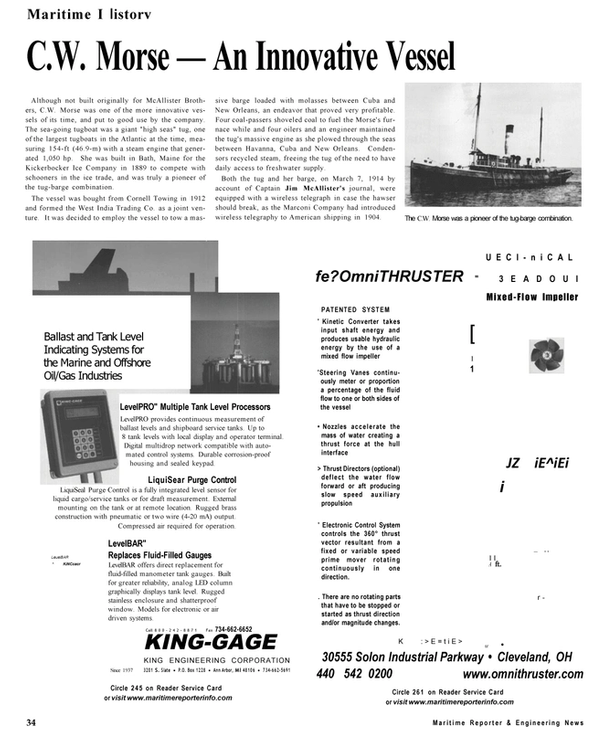