Moran Towing has commissioned Diane Moran, its 10th Z-drive tugboat, which was recently christened in a ceremony in New York Harbor. The tug will be used in harbor services. Currently, Moran's other Z-drive tugs are used by the U.S. Navy's Military Sealift Command in Norfolk, Va., and for harbor services in the port of Charleston, S.C.

The vessel is powered by two turbocharged EMD engines, which were chosen for their fuel efficiency, reliability and full compliance with the most recent environmental regulations. The engines deliver a total of 5,100-hp at 900 rpm, driving Z-drives with eight-ft.

stainless steel propellers. With a service speed of 13.5 knots, the vessel has a bollard pull of 152,000 lbs. Its bow is equipped with a Markey electric hawser winch, with a drum capacity of 400 ft. of nine-in. spectra/plasma tow line and a minimum drum-brake capacity of 400,000 lbs.

Built by Washburn & Doughty of East Boothbay, Me., the ABS-classed Diane Moran is outfitted with 12-in. D fendering on its side and stern, and 12-in.

wing fendering below the water line. It has a fire-fighting capacity in the form of two SKUM 1,500 gpm fire monitors fed by a 3,000 gpm Aurora fire pump, powered by a 400 hp Caterpillar engine. 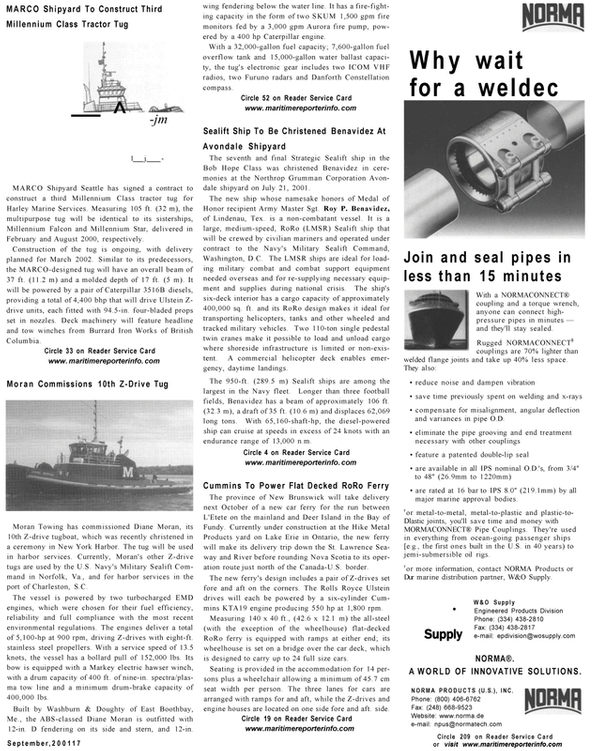