Central to McAllister Towing and Transportation's future growth prospects is the acquisition of vessels like the new Janet M. McAllister, a highly sophisticated Z-drive tug built by Eastern Shipbuilding which "has all of the bells and whistles," according to Captain Brian McAllister. New York City recently welcomed the new vessel, its most powerful tugboat, was named after two-yearold Janet M. McAllister, daughter of Buckley McAllister, vice president and general counsel of the family-owned company.

"My company was started in 1864 by my great grandfather," said President Captain Brian McAllister. "Janet is my granddaughter, so she's part of the sixth generation in a family that has stayed in the same line of work." The event, to welcome the 96-ft. (29.2 m), 5,000-hp, Eastern Shipbuildingbuilt tugboat home, drew a crowd of industry and non-industry gawkers as the vessel was put through its paces off of Pier 16.

Powered by a pair of EMD 12-645 E7B diesel engines that generate 5,000 hp for the Schottel SRP 1212 Steerable Kort Nozzle Rudder Propellers, the vessel is able to achieve a free running speed of 13.6 knots.

As is to be expected from a vessel of this type, maneuverability is incredible; a fact surely confirmed by the hundreds of people that stopped to stare as the vessel approached the pier at full speed, turning at the last second and initiating a series of tight circular spins.

Designed by Jensen Maritime Consultants of Seattle and classed by ABS, the vessel is capable of developing 120,000 lbs. of push or pull in any direction. 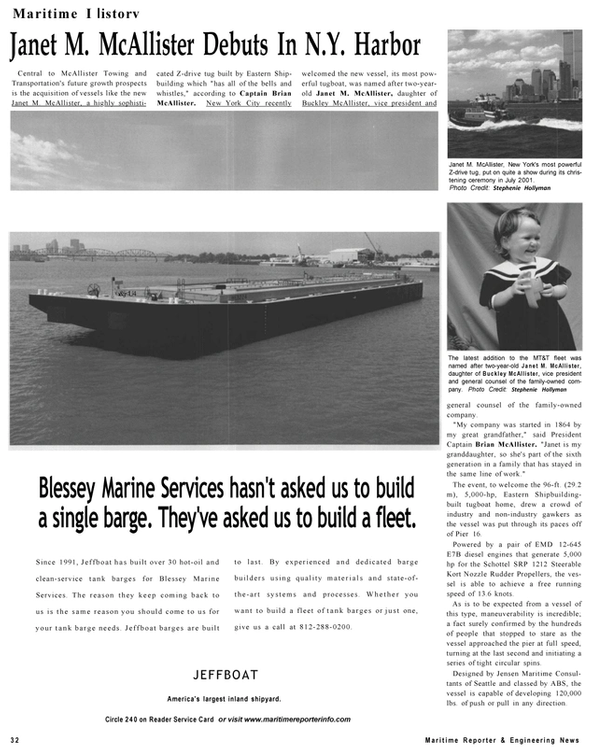