Making the transition from lighterage to towage, with the acquisition of his first tug R.W. Burke in 1876, marked a significant milestone for the company in that it was the company's first propeller driven vessel. (See story on page 31).

The 75-ft. (22.8-m), 150-hp tug was named after the man who financed its construction in Philadelphia three years earlier. Tugs at this point still proved too much of an extravagance for most shippers for the routine transfer of freight around the harbor, as slower, yet much cheaper, sail powered vessels were still popular. Towboats, called "luggers," were deployed for towage, and some tugs hauled long tows of barges along the Hudson.

The company also moved into the business of moving oil about the harbor, as A.J. McAllister Sr. once recounted: "My father had converted a number of his sail lighters into bulk oil carriers by putting bulkheads in them and caulking the bulkheads and the ceiling in the saillighter, so that a tank was thereby formed for carrying oil in bulk. They carried perhaps thirty tons of oil. And they sailed it from Bayonne, to Brooklyn, Manhattan, wherever. This small fleet became quite a factor in the moving of oil in the harbor." It seems though, that the company seemingly missed the boat on another major deal, which would have indeed drastically changed the direction of the family company, as A.J. McAllister once again recounted: "Reportedly John D. Rockefeller came to my grandfather because he was in the process of forming the major Standard Oil Company, or had dreams of doing it, and offered my grandfather a substantial piece of the company if he would put his fleet in for the acquisition of stock in the new Standard Oil Company. And unfortunately for the McAllisters, my grandfather said no." Regardless, the company continued to prosper in parallel with the burgeoning shipping business of New York harbor, and by 1900 Greenpoint Towage and Lighterage had acquired more "propellers." It was around this time that the company officially made the transition to McAllister Brothers, the company name that would exist up until the 1990s.

The New Generation "When we took over in 1974, we were very aggressive, and understood that east coast port growth was going to flatline," said Captain Brian McAllister. And so as the prediction crystallized, so too did the future course of the family's business. The company, founded with the sail lighter that James McAllister purchased long ago, moved its last lighterage barge — a shipment of coffee — in 1980.

It was an aggressive attitude towards expansion, combined with a myriad of factors including the fickle oil market, which almost led to the company's demise in the mid 1980s.

"We entered the oilfield business with supply and crewboats out of Houma, La., and eventually grew the fleet to 35 vessels," said Captain McAllister. While the company continued to add an impressive number of vessels, it also continued to add more and more debt, and Brian McAllister's father, Anthony J. McAllister, grew concerned.

I remember my father telling me about the Great Depression, and how the 1930s reduced McAllister from a large, prosperous company to the operation of one tug, he said. "He had to take a job in a shipyard to support his family." While Brian shrugged off the warnings — reasoning there would never be a depression similar to the 1930s again — the bottom nearly fell completely from underneath his feet, literally, with the great oil crash in the mid 1980s.

The company had aggressively acquired — with little or no cash down — a total of 35 supply and crew boats, 18 of which were working in the Persian Gulf. During the mid-80s, Gulf of Mexico supply boat dayrates plummeted from $3,500 per day to $600 per day, and the crews that were working were being paid 50 percent of their wages.

The 18 boats that were working in the Persian Gulf, almost overnight, were reduced to three boats working and 15 tied up in Dubai. The boats were tied up literally, yet at the same time had restricted the company financially, as each had an enormous mortgage with the owner signed on for them personally. "The stability of port operations helped the company survive this depression ... barely," Captain Brian McAllister said.

By the early 1990's the price of oil rebounded and the company's fortunes grew with the new oil economy. Now McAllister once again moved into oil field service and even oil production.

Brian's brothers and cousins who owned the business all retired, or in the case of his brother Bruce McAllister, left to become the Deputy Commissioner for the Maritime Administration in Washington. This left Brian with only one partner who felt the low margin business of tugboating should be sold. This led to a long legal dispute that was ultimately settled.

His partner received the offshore services company, Offshore Express, the fabrication company, Offshore Specialty Fabricators, and the oil producing company, Petrotech. Brian retained the tugboat operations and the ferry service from Port Jefferson, N.Y., to Bridgeport, Conn., which was the very foundation of Circle 275 on Reader Service Card or visit www.maritimereporterinfo.com the company. Most importantly, he retained the company with very little debt "and I'd like to keep it that way," he said emphatically.

A Promising Future The rebound from the turmoil of legal battles has been swift and pronounced, as the company has worked harder than ever to solidify its core competency — ship docking — while adding the vessels, technologies and services that will sustain it for the coming decades. Brian McAllister takes the company's future very personally, and in the twilight of his career he seeks to re-solidify its foundation to ensure its durability for generations of McAllisters to come. The aggressive approach employed by Captain McAllister in the mid-70s has been replaced by a more calm rationale, ultimately guided by the desire to see his company transcend another five generations. "When people are young there is an insatiable desire to become big and grow, but you have to balance between growth in a correct manner versus taking on too much debt ... and that's tough," McAllister said.

"Is the country headed for a deeper recession? I don't know, but I don't want to become too aggressive now," he said.

"I'd much rather make the mistake of increasing the company's liquidity and decreasing our debt, while maintaining our position in an industry that demands constant rebuilding and upgrading." But at the same time, he did confide that the company is currently contemplating an acquisition. While he could not elaborate, he did indicate that it would be an acquisition of a business the company knows: "it would have 100 percent synergy with what we do now ... we're not looking to dive into new fields, or make acquisitions just for an acquisitions sake." The move, if and when it happens, could go a ways in leveling the playing field with longtime rival Moran, which gained a leg up on its close rival with the acquisition of Turecamo maritime in the mid-1990s. "[The purchase] was really a disappointment to me," said Brian McAllister in a 1998 interview with MarineNews magazine.

"McAllister had the reserves to buy Turecamo, but we couldn't resolve our own problems quickly enough." Of the business MT&T already owns, Captain McAllister admits that the ship docking portion of the business is not an area for future growth, primarily due to the growing trend towards larger ships and deeper channels, meaning that more cargo can arrive on fewer ships. The push for increasingly larger containerships and tankers, often found within the pages of Maritime Reporter, is a testament to this trend. He notes that this is hardly a new trend, rather a long, drawnout attrition which has resulted in the a marked reduction in competition, from nearly 50 tug and towing companies that used to service New York Harbor to, basically, McAllister and Moran today.

Conversely, the demand for Z-drive vessels and their unique capabilities is set to expand significantly, as will the company's fleet of this type over the coming months. While Captain McAllister declares the power and maneuverability of the current Z-drive as outstanding, he does concede that the vessel's capabilities are a bit of an overkill, noting that only rarely will such maneuverability be required in the normal course of operation. However, vessels of this capability are needed to win contracts, and McAllister is ensuring that it is equipped to handle the demand. The new Z-drive fleet — that currently consists of five boats, three owned and two chartered — will be expanded next year, said Captain McAllister. "There are certain clients (for example, the Navy) that demand this caliber of boat. If you don't have them, you don't get the business," he said. "There are bids out right now that require this type of boat, and that's why we built them at 5,000 hp with all of the bells and whistles," so that they could be used in a number of demanding applications.

Identifying oil barging as a potentially significant growth area, the company is also contemplating building an offshore tug that would be able to handle the articulated tug barges, units which have increased in popularity due to their inherent efficiencies, and units that will likely be in higher demand as shuttle tankers if and when Floating Production Units start operating in the deeper waters of the Gulf of Mexico.

In addition to ATB's, McAllister would like to see the company build on its container barge business. Currently, MT&T owns a pair of container barges holding up to 640 TEU's, which should be highly profitable by now. The company entered into an agreement two years ago to haul garbage from New York to Virgina, but an environmental concern has put the contract on hold with fears of transporting the garbage on the waters of the James River. Meanwhile, the garbage is moving — nearly 12,000 tons per day — via truck and rail, which are obviously more expensive options.

McAllister is confident, however, that the contract will soon enter force, putting the barges back to work, and he is currently negotiating to increase the size of the company's container barging business. 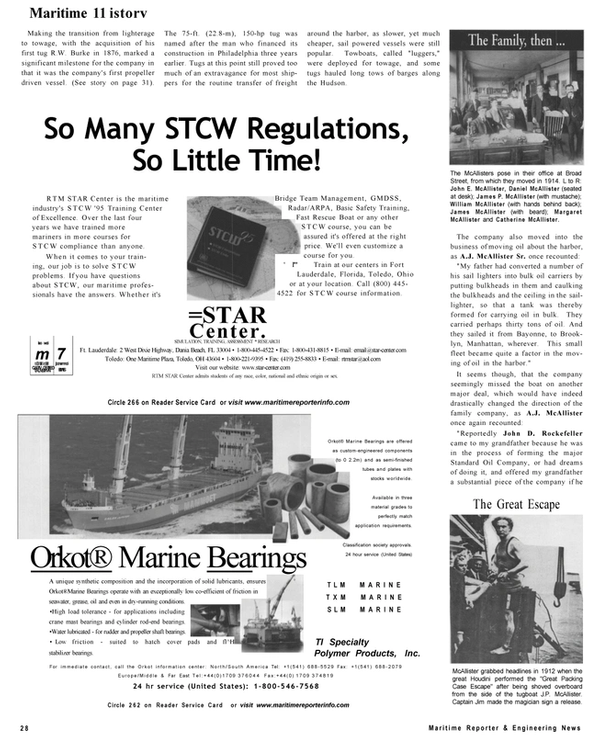