Spain is reported to be in talks with several shipbuilders in Europe to create a joint European company similar to the aerospace EADS, the chairman of Spain's state holding company (SEPI) said. After a presentation in Madrid of Spain's new civilian and military shipbuilder Izar, Pedro Ferreras said SEPI was already talking to groups in France, Germany and Italy.

"We want to begin working on projects common to European countries, like the model followed by the aerospace sector, but that takes time," he said, referring to the European Aeronautic Defense and Space Company (EADS). EADS was born from the merger of SEPI-controlled Casa, France's Aerospatiale Matra and Germany's DaimlerChrysler Aerospace. Izar, formed by the July merger of state-owned Bazan and Asterilleros Espanoles, could be a role model for Europe's money-losing shipbuilders and the motor behind a European project, Spanish Finance Minister Cristobal Montoro said. "Izar could be the point of reference and should be the impulse for a European naval project," he said. SEPI Chairman Ferreras added that the new group, the 10th largest shipbuilder in the world with a turnover of 225 billion pesetas ($1.2 billion) and orders totaling 638 billion pesetas, could sign a deal with the German group Babcock Borsig. "We have a magnifi- cent relation with them and we've started speaking about possible collaboration in the area of submarine building," he said. Earlier in the presentation he said state-owned Izar would break even in 2003 and make a profit of 5.0 billion pesetas ($26.7 million) by 2005 after years of restructuring and heavy losses in the public-controlled industry. 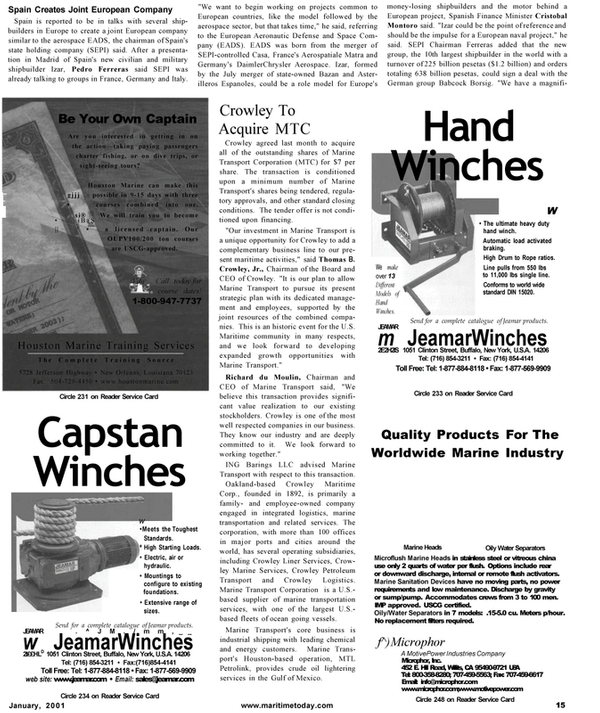