Can the Hinge Ship Work?

Barring the ability to transport mass amounts of cargo in a Star Trek-esque manner, it's reasonable to assume that ships and boats will continue to be the globes' hauler of goods for the foreseeable future. In the quest to make water transportation safer and more efficient, designers are constantly pushing the limits, and has led the editors of Maritime Reporter & Engineering News to ask such questions as ...

Hinge-Ship is a patented concept designed to combine the advantages of both deep draft and shallow draft shipping within the confines of a single vessel.

The concept, if proven viable, could help to further the mandate of shaving valuable time from the transportation of goods from "point A to point B," as it would literally eliminate the need for storage at transshipment points and the transfer of cargo to other vessels, and all of the time and cost inherent in both.

The essence of the design is that the vessel is split on centerline, and provided with a hinge. This arrangement, according to its designer John H. Leary, P.E., of Leary Engineering in New Orleans, allows the two separate port and starboard hulls to rotate relative to each other and thus alter, for a given displacement, the vessel's waterplane area and draft.

The "Hinge" The rotation of the two hulls about the hinge is accomplished by using the beam and gear mechanism.

This operation is greatly assisted by using water ballast in the double bottom spaces under the cargo compartments.

Each double bottom is divided by a watertight longitudinal bulkhead at its center. Because the forces encountered in inland waters are relatively small, the hinges and beams alone are able to resist relative movement between the two hulls. However, the vessel's two hulls are brought together in the deep-draft configuration before it goes to sea. This engages the aligning devices (pyramids and sockets), which along with the beams and hinges, resist the longitudinal and vertical forces encountered at sea. Additional analyses confirmed the ability of the hinges to resist hull torsion at sea. The materials selected for the hinges and bearings are resistant to corrosion and binding.

Economies of Scale The advantages of owning and operating a vessel, which could readily transform from a deep draft configuration to a shallow draft arrangement are rather obvious in terms of savings of time and money. While the jury is still out regarding a potential owner/operator's view on having a hinge on its vessel, with all of the safety and maintenance questions that come with it, Leary presents a strong case for a radical design, which could well fit the transportation bill of future generations.

For example, the vessel offers economies not only to the owner operation, but also the shipbuilder, as the design concept can be built using barge building techniques at relatively small shipyards. The design calls for a deck, bottom and shell consisting almost entirely of stiffened flat plate and chines. The bow and stern are raked and resemble river barge rakes when the vessel is in its shallow draft mode. However, these rakes are shaped so that the bow and stern more closely resemble those of a ship's seagoing form when the vessel is in its deepdraft mode. These features are evident in the drawings of the vessel and in the photographs of the model.

The Initial Design Drawings depicted throughout the ensuing pages depict a vessel of both a self-propelled (ship) and nonself- propelled (barge) version. The initial offering is of a vessel that would be suitable for the Mississippi River system, but should be duly noted that they are transferable for other dimensions and proportions as well. The principal dimensions of the prototype Mississippi River system vessel are: The vessel is capable of carrying additional cargo in its ocean configuration as follows: The 595 x 105 ft.

(60.9 x 10.6 m) river barges. The ship version is designed to navigate anywhere a tow of nine barges can navigate. Either the barge or the ship versions can be placed in a tow of standard barges being pushed by a standard towboat.

The vessel's dimension also allows it to transit existing locks on the Mississippi inland river system. In addition, standard ocean tugs can tow the barge version at sea, and of course, the ship version can sail under its own power. 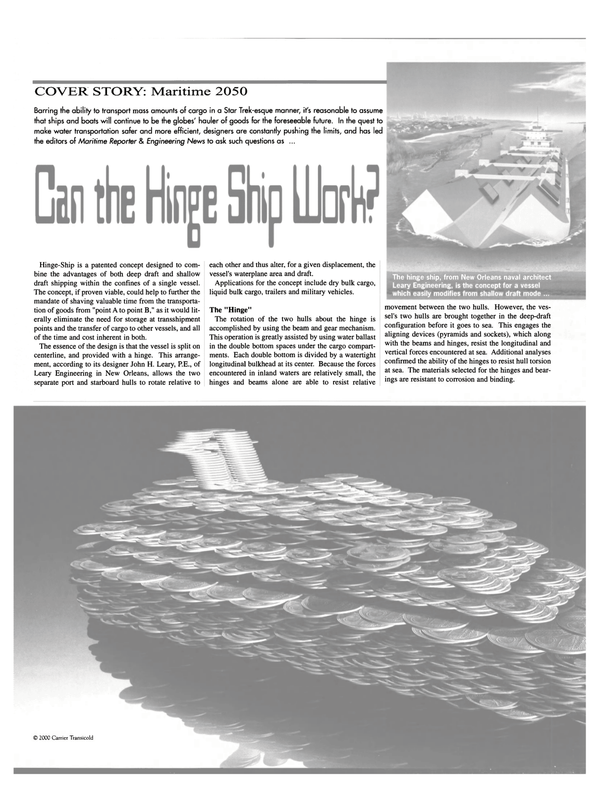 Read Can the Hinge Ship Work? in Pdf, Flash or Html5 edition of September 2000 Maritime Reporter

Other stories from September 2000 issue