Since Royal Caribbean decided to embrace the advanced marine propulsion technology inherent with gas turbines, power plants aboard cruise ships built and delivered in the new millennium could be much different.

Even if all newbuilds do not incorporate gas turbine power, other propulsion suppliers such as diesel manufacturers will be driven by this new competitor in a previously diesel dominated domain — along by new and increasingly stringent environmental emission requirements — to continuously improve their designs in order to meet future needs.

Owners and shipyards will be concentrating heavily on the following power plant issues when considering new ship designs: Space Utilization Royal Caribbean and Celebrity selected a COmbined Gas turbine and Steam turbine Electric drive System (COGES) for their new ships. This system, based on GE's LM2500+ aeroderivative gas turbine, was chosen because RCI was committed to using gas turbines for 100 percent of the ship's normal operational power requirements. The only diesel power aboard will be two small high-speed units to provide emergency standby and auxiliary power when the main gas turbine units are not in operation.

One LM2500 aeroderivative gas turbine-generator set will be applied per ship, operating in parallel with one or more of the diesel generators on board. This configuration will allow the vessels to operate in environmentally sensitive areas using clean gas turbine power.

Currently 27 navies use 968 engines on 388 ships. In the commercial marine arena, 82 GE LM gas turbines can be found on 45 ships, in various hull configurations, and in both mechanical and electric drive propulsion systems.

Environmental Concern A major driver for Royal Caribbean and Holland America was the desire to make a statement to the world about their concern for the environment.

The COGES plant being installed on the Royal Caribbean and Celebrity ships will produce only 5.0 g/kWh NOx at 47 MW without any emission reduction systems. By using GE's Dry Low Emission system for the LM2500 and 2500+, NOx can be reduced to less than l g/kWh. The engine controls monitor emissions on-line and adjust fuel burn automatically to maintain preset levels of both NOx and CO.

Passenger Comfort Passenger comfort is also a major concern in the cruise industry. The lightweight design of the gas turbine with its high-speed balanced rotating assemblies and continuous combustion process allow it to operate with minimal vibration signature. Airborne noise emitted from the gas turbine genset is limited to 90 dBa by the sound attenuated enclosure around the gas turbine. Exhaust noise normally requires no silencing.

Reliability/Maintainability A gas turbine that is readily available for service is crucial in all marine environments.

GE's products are proven, in that the parent aircraft engines from which the LM gas turbines were developed have more than 216 million reliable operating hours on various aircraft.

For instance, through more than 300 GE Component Improvement Program initiatives, extensive reliability and maintainability advancements have been made to the LM2500. This program includes the infusion of advanced materials, coatings, improved bearings and electronic fuel control. A continuous improvement has been demonstrated. In fact, when the LM2500 was introduced almost 25 years ago, the incidence of engine removal was estimated at 5,000 hours. U.S. Navy data shows that the removal interval for earlier versions of the LM2500 exceeds 18,000 hours and the most recent versions exceed 23,000 hours. 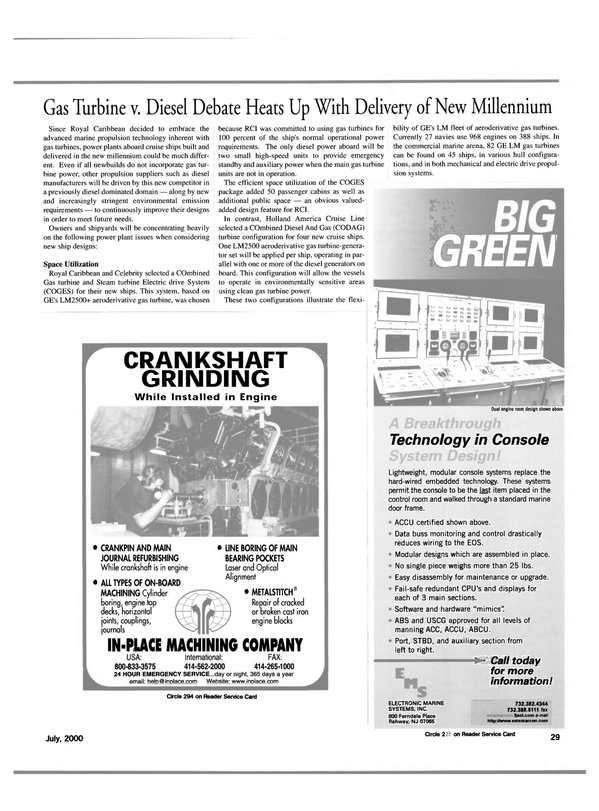