Cascade General Gets Crystal Harmony Back In Sync

Subsequent to the departure of Holland America's Statendam in April, Cascade General took in Crystal Cruises' Crystal Harmony for a 10-day stopover in May. The 10-year-old ship underwent maintenance and overhaul work below its waterline, extensive interior remodeling and steel replacement for pool areas on Deck 11.

With maximization of work in mind.

Cascade normally sends advanced crews to join cruise ships on their way to the yard's Portland, Ore. locale. This time though, the first mobile crew met the ship in Los Angeles, where work commenced immediately on an overhaul of one of Harmony's auxiliary boilers.

A second team was then summoned to San Francisco to clean ballast tanks before undertaking structural repairs and preservation work.

(299 m) Drydock four, beginning with the mechanical systems below the waterline. Sperry stabilizer fins, each weighing 27 tons were removed to a building bay for complete refurbishment, while the 1,000 kW Lips bowthrusters were taken out for complete disassembly, overhaul and testing in one of the shipyard machine shops.

Multiple layers of paint were blasted away to clean the hull down to its bare metal so that a five-coat Jotun paint system could be applied. Welding crews replaced corroded steel in several locations, and more than 50 sea valves were overhauled and inspections performed on propellers, shafting and rudders for Lloyd's Register compliance. 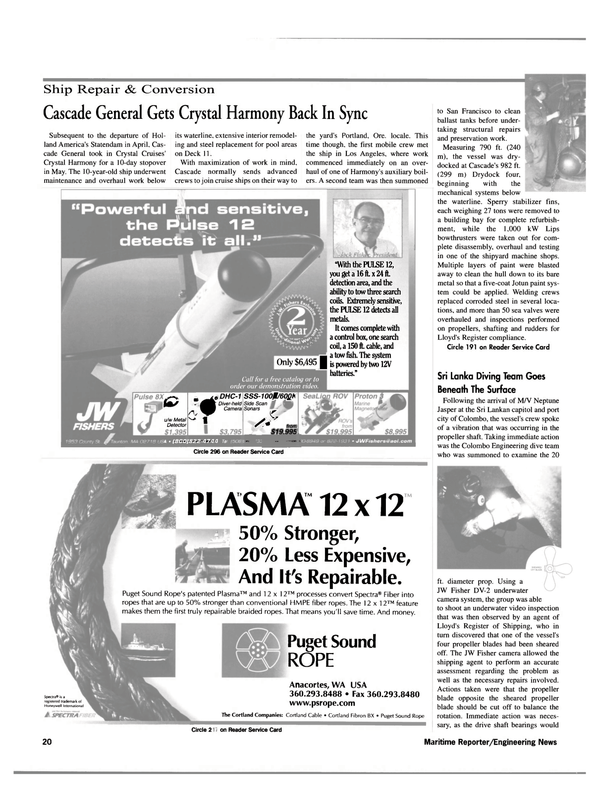 Read Cascade General Gets Crystal Harmony Back In Sync in Pdf, Flash or Html5 edition of July 2000 Maritime Reporter