Bollinger-Built Tornado Kicks Up A Storm

The 14th member of the Cyclone Class to be built by Bollinger under a sole-source contract with the Navy, it is the first to include design modifications, equipment and armament upgrades as part of the Navy's Preplanned Product Improvement.

The vessel is modeled after the successful Vosper Thornycroft Ramadan class design, modified to meet Navy requirements, which entail change in the stern - including a ramp for the launching and recovery - while underway — of naval special warfare boats. Throughout its design/construction process, Tornado was extended from 170 - 179 ft. (51.8 - 54.5 m) and adjusted to decrease its susceptibility to radar detection by reducing its signature.

Also included is an impressive weapons suite, as well as hull and main decks — as on all Bollingerbuilt Cyclone Class patrol boats — made of steel and aluminum superstructures. Measuring 179 ft.

(54.5 m), with a beam of 26 ft. (7.9 m) and a draft of less than eight ft. (2.4 m). Tornado is fully operational through Sea Sate 3. Power is provided by four Paxman diesel engines developing a total of 13,400-hp, driving four, 42-in. diameter propellers through Reintjes reverse/reduction gears. Electrical power is supplied by two 150 kW Caterpillar generators. Holding a fuel capacity of 15,000 gallons, and 1,200 gallons of potable water produced by three water makers. Tornado's continuous speed is above 35 knots. 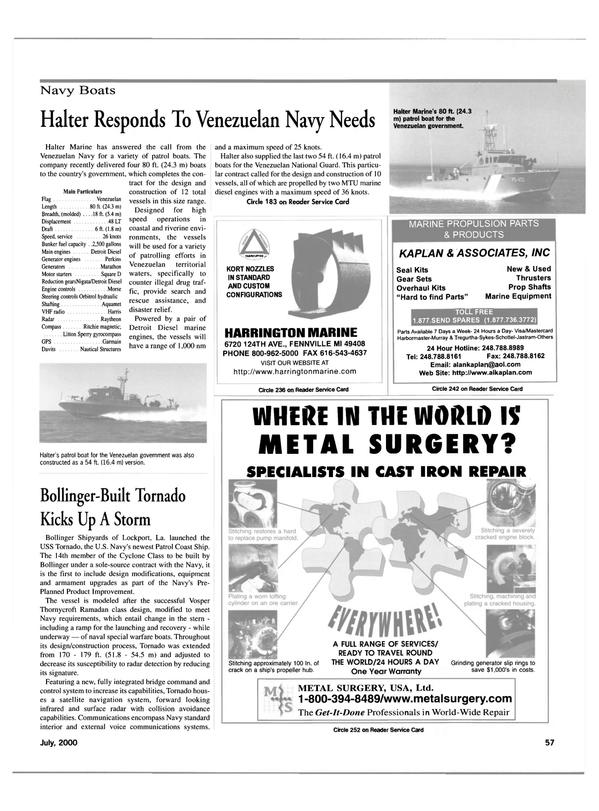