One of the most notable aspects of the new generation of RoPax ferries, which could secure the immediate future of shipbuilding in Northern Ireland is the selection of electric propulsion using podded drives. Furthermore, unlike the vast majority of pods ordered to date for cruise liners, offshore vessels, icebreakers and other types, the favored system is based on water-cooled rather than aircooled propulsors. The significance of this is the additional space-saving rendered within the ship's aft-end, a vital consideration in RoRo vessels where efficient stern loading and discharge is critical to fast-turnaround performance.

Formalization of Harland & Wolffs contract for a series of 625-ft. (190 m) RoRo passenger vessels, employing a Norwegian-developed, 27-knot ship design, would provide a new reference for all-German technology manifested in the Siemens-Schottel Propulsor (SSP). While the Azipod and Mermaid outboard electric drives have set the pace in recent years, the SSP is now coming into its own, bringing the concept of podded propulsion to new segments of the market.

Following the breakthrough order for a 5.1-MW unit on a 19,000-dwt Swedish petrochemical tanker newbuild in China, SSP podded electric drives have been selected by German TT-Line for its new class of Baltic ferries. They have also been specified for Costa cruise ship rebuild and COSCO heavylift vessel new-construction projects.

The particular merits of the system in the context of efficient RoRo design have also been underscored by Fin- cantieri's nomination of the twin SSP units for a proposed new type of large passenger RoRo ferry.

Unlike its contemporaries, SSP is based on a permanent-magnet motor (PEM), proven in naval applications.

Heat generated inside the drive is transferred direct to the surrounding seawater, requiring the smallest possible void space within the stern section of the vessel.

By contrast, pod systems using conventional electric motors require internal air cooling, necessitating space for coolers in the after part of the hull.

Harland & Wolffs order from Seamasters International of the Bahamas is subject to intervention aid, financing and guarantees. The provisional agreement spans four vessels of the 6,500-dwt Atlantic 4000 class, formulated by Oslo-based SeaTrade, and carries options on fifth and sixth ships. The diesel-electric podded propulsion system is one contributor to the 15-20 percent improved fuel efficiency claimed for the Atlantic 4000 relative to competing designs. The other main influences are reduced steelweight, optimized hull lines, and special load sharing software controlling the main engines. 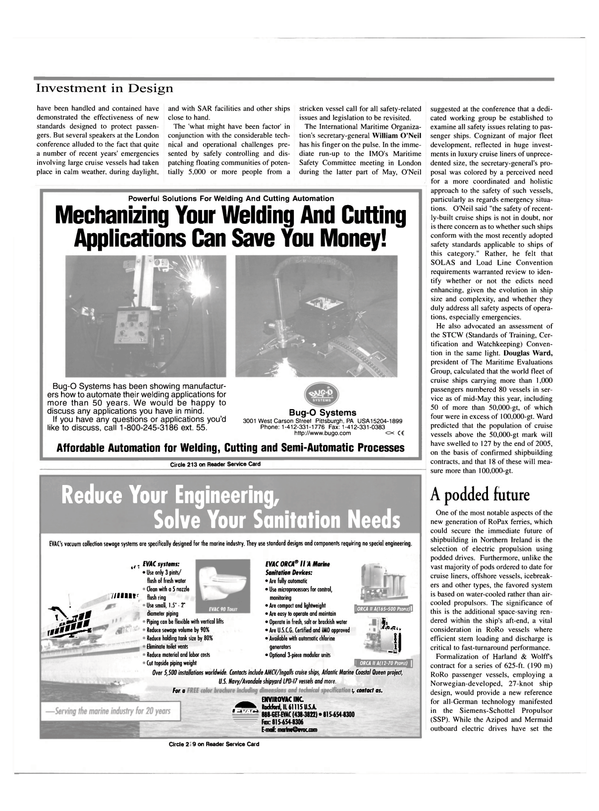