Read this page in Pdf, Flash or Html5 edition of May 2000 Maritime Reporter Magazine 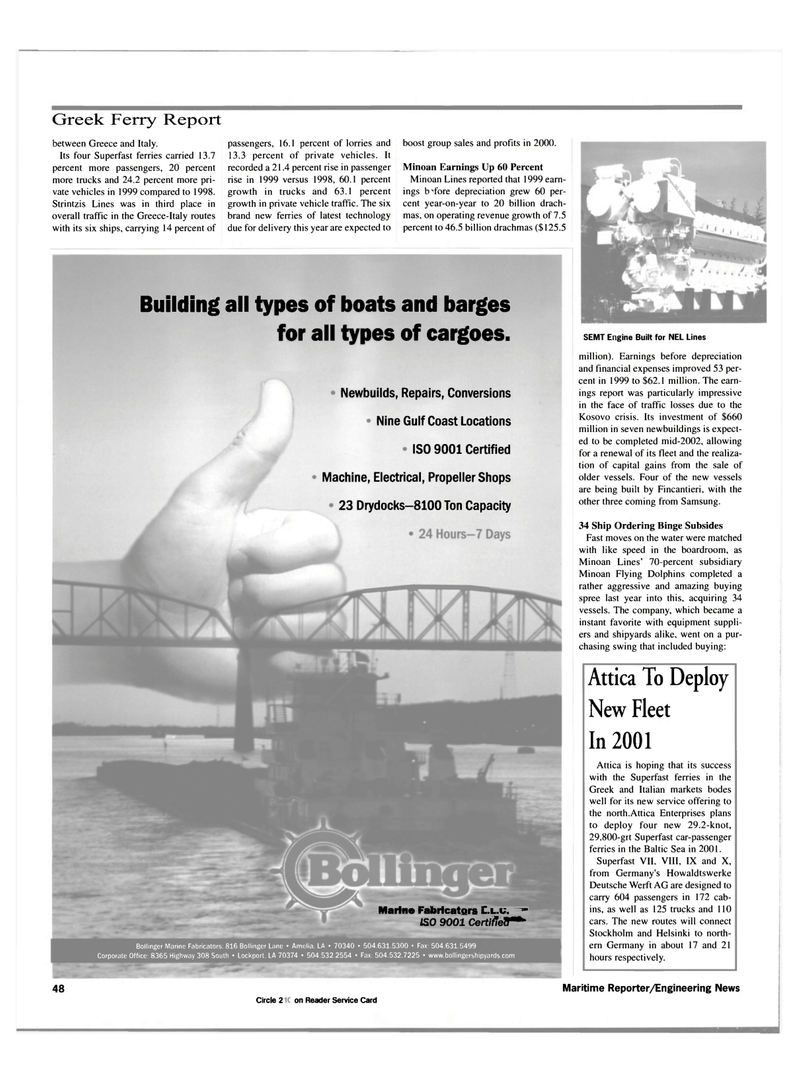 Strintzis Lines was in third place in overall traffic in the Greece-Italy routes with its six ships, carrying 14 percent of passengers, 16.1 percent of lorries and 13.3 percent of private vehicles. It recorded a 21.4 percent rise in passenger rise in 1999 versus 1998, 60.1 percent growth in trucks and 63.1 percent growth in private vehicle traffic. The six brand new ferries of latest technology due for delivery this year are expected to boost group sales and profits in 2000.

Building all types of boats and barges for all types of cargoes. SEMT Engine Built for NEL Lines million). Earnings before depreciation and financial expenses improved 53 per- cent in 1999 to $62.1 million. The earn- ings report was particularly impressive in the face of traffic losses due to the

Kosovo crisis. Its investment of $660 million in seven newbuildings is expect- ed to be completed mid-2002, allowing for a renewal of its fleet and the realiza- tion of capital gains from the sale of older vessels. Four of the new vessels are being built by Fincantieri, with the other three coming from Samsung.

Fast moves on the water were matched with like speed in the boardroom, as

Minoan Flying Dolphins completed a rather aggressive and amazing buying spree last year into this, acquiring 34 vessels. The company, which became a instant favorite with equipment suppli- ers and shipyards alike, went on a pur- chasing swing that included buying:

Greek and Italian markets bodes well for its new service offering to the north.Attica Enterprises plans to deploy four new 29.2-knot, 29,800-grt Superfast car-passenger ferries in the Baltic Sea in 2001.

Deutsche Werft AG are designed to carry 604 passengers in 172 cab- ins, as well as 125 trucks and 110 cars. The new routes will connect

Stockholm and Helsinki to north- ern Germany in about 17 and 21 hours respectively. 48 Maritime Reporter/Engineering News