A new shape in navy warships is quickly taking shape in the U.K., as Vosper Thornycroft (VT) has completed structural work on the 321 ft. (98 m) Trimaran Warship demonstrator being built for the U.K.'s Defense Evaluation and Research Agency (DERA). The upper bow structure, weighing approximately 25 tons, was maneuvered into position on the RV Triton, which is scheduled for launching this month. The ship will be delivered to DERA in August before starting the initial phase of a trials program that will determine whether trimaran hulls will be considered for the Royal Navy's Future Surface Combatant.

BT has built the ship using mega- blocks weighing up to 200 tons each.

Five mega blocks have been fabricated and extensively fitted out before consolidation.

"Building a trimaran of this size has meant dealing with several challenges that we have not encountered in building conventional ships. The lessons learned have been invaluable and have provided us with unrivalled experience in building this from of ship," said VT project manager Mike Carter. "If trimaran is the way ahead, VT is undoubtedly at the forefront.

RV Triton has reached structural completion in less than 15 months since DERA chief executive Sir John Chisholm cut the first steel in January 1999. Accolades for this impressive production schedule is largely attributable to advanced manufacturing methods including the use of a high-quality plasma cutting system.

"The RV Triton build has resulted in new VT productivity records for large steel ships, and this has enabled us to build the ship within the limited budget and to a demanding program," said Carter. "With several new Royal Navy programs on the horizon, the trimaran has been an important demonstration of VT's capabilities." Circle 69 on Reader Service Card 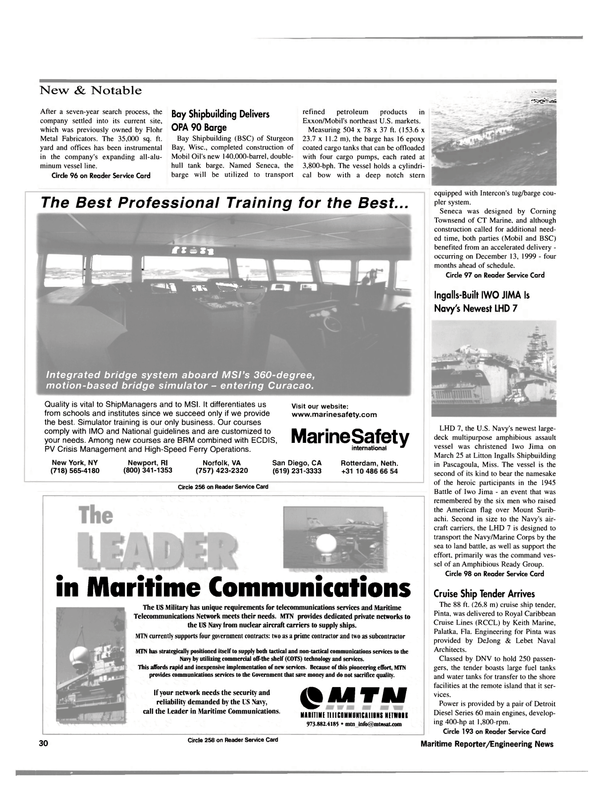 Read Trimaran Demonstrator Progressing At VT in Pdf, Flash or Html5 edition of May 2000 Maritime Reporter