As a bastion of ship production in the under 10,000-dwt-vessel range, the industry in the northern Netherlands continues to demonstrate true global competitiveness in its chosen fields of endeavor. While much of European shipbuilding bewails the intensified onslaught from the Orient, impinging on an ever-greater range of ship types and ever-widening circle of European shipowning communities, the yards and allied firms in the northernmost Dutch provinces are putting down building blocks in new market areas.

Key points of the investment-underwritten drive to increase market reach and develop business volume are a push towards larger vessels, up to 20,000-dwt in some cases, and the forging of new relationships with builders in Eastern Europe. Industrial evolution in the north Netherlands has involved an active policy of reinvestment and improvement in the means of shipbuilding production.

The rise of new ship and section assembly halls over the windswept landscapes fringed by the Waddenzee and the IJsselmeer is complemented by continuous design development, not least in the industry's core business of supplying dry cargo ships, multi-purpose vessels and container feeder carriers. The design effort couples 'added-value' with series production potential, and marries the vital requirement for constructionfriendly forms with a deep understanding of the needs of the ship operator and industrial freight market.

More than ever, the region's strength in shipbuilding and the allied sectors derives not only from its professional skills but also from a propensity for collaboration between like-minded, but wholly-independent firms.

Networking between assembly yards, section builders, cut steel suppliers, marine equipment makers and design engineering firms has conferred a high level of self-sufficiency, while specialization in each case has fostered very high productivity levels. While subcontracting of bare hulls to cheaper-cost countries has long been a policy of certain small-ship and craft builders in the Netherlands, the principle of networking is being extended to include stronger relationships with selected yards in Eastern Europe. Just as the new investments in shipbuilding in the northern and middle regions of the Netherlands have largely complemented rather than displaced existing facilities on the inland waterway network, augmented relationships with yards in Eastern Europe do not signify a diminution in the indigenous shipbuilding resources.

As the latest example of business verve, the recently expanded Volharding Group has signed a new agreement with Daewoo Mangalia Shipyard in Romania paving the way to a growing, annual supply of hulls for outfitting in the Netherlands. The pact with the Korean majority-owned Romanian yard, plus investments in Volharding's two shipyards, specialist outfitting facility and section building yard in Groningen province, should see the group's new- building output in 2000 rise to 18 vessels from nine last year. The typically Dutch and German client profile has been broadened by contracts from Mediterranean and Southeast Asian owners for multi-purpose vessels, while the group's market focus now extends from 1,800-dwt to 20,000-dwt, compared to the maximum 9,000-dwt hitherto.

One of the key constituents of the industry in the north is the sales, marketing and design engineering firm Conoship International. Jointly owned by the member yards, which include the Volharding Group, Conoship acts as an antenna for the individual builders in the international market, taking a proactive line in business development and the providing project support through to the contract stage, fulfilling a matchmaker role between customers and the shipyards.

Conoship is emblematic of the northern industrial structure and business ethos as a whole, since it lives by gener- ating added-value to the shipbuilders' own commercial and technical endeavors, and in turn gives succor to, and draws benefit from the integrated network.

Its impressive, newly-published portfolio of multi-purpose cargo vessels and feederships includes a 15,500-dwt general cargo carrier formulated in conjunction with the Volharding Group. The 730.000-cu ft. class signals an impending new phase in production from a region, which has recently turned out a range of vessels and designs establishing the popularity of the 9,000-dwt size in the multi-purpose scenario. Another example of a Dutch yard having coupled investment in the home ground with a link-up in Eastern Europe is Peters Scheepwerf. The commissioning in 1998 of a new hall for the construction of vessels up to 12.0()()-dwt has raised the scope of its Kampen premises on the IJssel beyond the traditional coaster sizes. At the same time, a strengthened connection with the Czech shipyard CSPL, for the supply of coaster hulls, has sharpened Peters' competitiveness at the lower end of the capacity band.

Ever-growing Damen Shipyards meanwhile, while maintaining a northern presence with its Hoogezand yard aside the Winschoter Diep near Groningen, last year acquired a majority holding in Santierul Naval Galati in Romania, following five years' cooperation between the Hoogezand and Galtaz yards. 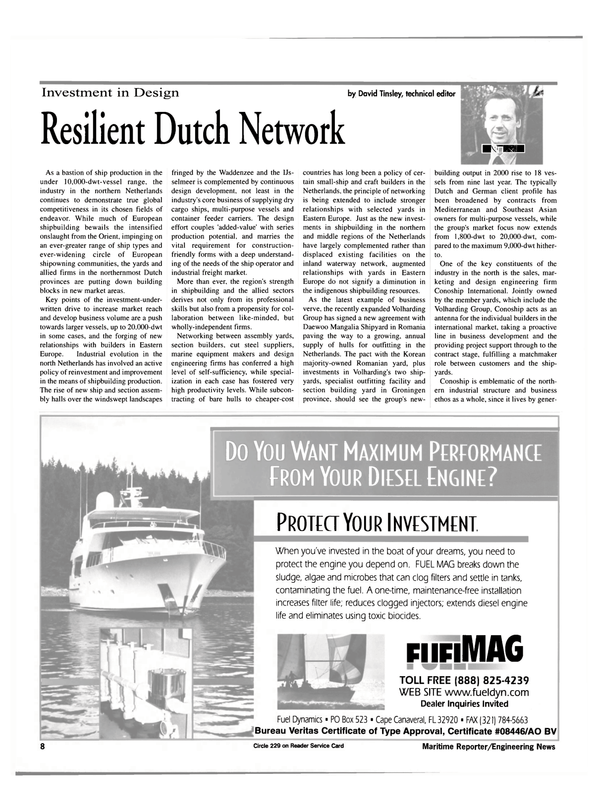