Globalstar, L.P brought its next- generation strategizing to fruition with the release of full commercial access of its mobile satellite service in the U.S. through its distributor Globalstar U.S.A. With the recent demise of Iridium, and ICO Global Communications' ongoing recovery from bankruptcy, Globalstar's entry into the market is seemingly ideal. Vessel owner/operators increasingly rely on state-of-the-art communication tools to ensure safe, efficient operations. Much as has transpired in consumer markets, the wider availability of communication technology — and subsequent drive-down of equipment and airtime pricing — fuels airtime usage. One of the most prominent trends to hit the industry is the era of satellite communications, supplemental to the conventional "cell-phone," satellite services offer extended service to remotely-located areas — areas where cellular coverage is nonexistent.

Enter Globalstar U.S.A. (GUSA), an indirect subsidiary of Vodaphone Air- Touch Pic, the company has sole exclusivity to sell its satellite service throughout the continental U.S. The newly established service provides customers with the ability to place and receive phone calls and short messages. In due time, the company is also striving to release an e-mail and other data features across other parts of the world.

The land-based section of this network is both owned and operated by Globalstar U.S.A. throughout the U.S., Canada and the Caribbean. With gateways situated in Clifton, Texas; Smiths Falls, Ontario, Canada; High River, Alberta, Canada; and San Martin-Texmelucan, Mexico, the service places each call to the nearest satellite, which then rebounds to the closest gateway from where the call is being made. The next step involves a routing into the landline system.

Known as "Bent-Pipe" Architecture, this method allows the call to move through a terrestrial infrastructure — leading to upgraded call quality and fewer dropped calls.

This tool, which satisfies customer demands of larger network call capacity, enhanced security and distinct voice quality is, according to Andy Radlow.

GUSA director of marketing, "the most popular and fastest growing wireless standard that is well-suited to harsh radio environments." This handy tool also allows the user to talk to five satellites at one time and if one satellite is obscured by a large object, the other Globalstar-deployed satellites will maintain the user's current connection.

Getting It Off The Ground Established in 1991, San Jose, Calif. - based Globalstar L.P. is a conglomeration of international telecommu- nications companies. The venture was spearheaded by Globalstar co-founder, Loral Space & Communications and Qualcomm — with noted strategic partners such as — DACOM, Daimler- Chryslser Aerospace, Space Systems/Loral and parent company, Vodafone AirTouch. Through subsidiaries and joint ventures, U.K.-based Vodafone, came onboard in 1994, and currently serves as the service provider for Globalstar in 15 countries throughout North America, Europe, Australia and Africa. The company holds an eight percent interest in the Globalstar conglomerate.

Preceding its grant for licensing from the FCC this past December, GUSA orchestrated the first phase of its satellite services through a trial period occurring from October to December 1999. During this time, both the company's distributors and targeted potential customers acted as testers of the impending network.

Following this free trial period, the individuals were asked to evaluate the service's good and bad points, as well as offering ways in which the system could be more user friendly.

After implementing some fine-tuning to its network, premiered its revolutionary service to the world on February 28 at CTIA Wireless 2000 in New Orleans, La.

Globalstar To The Rescue Seemingly gone from the satellite communication scene is the pioneer Iridium l,LC, which ceased service, potentially forever, on March 18. Fol- lowing a high profile romp through Chapter 11 restructuring and billions of dollars from partner Motorola, Iridium simply could not find any interested buyers who were willing to pick up its pieces. Despite M o t o r o l a ' s attempt to help Iridium recover (it held a 20 percent minority interest), the company had been treading murky waters up until its demise. A letter drafted by Motorola to Iridium customers stated, "that unless a qualified buyer comes forward and provides additional funding by March 15, we do not expect Iridium service to be available after 11:59 p.m. EST on March 17." The notice, which appeared on Motorola's Web site, also suggested its customers to explore other services, such as Globalstar should they want to continue satellite service.

Quick thinking and decisive planning already had Globalstar on its feet even prior to the March 17 blackout date. The company's distributors had already implemented aggressive promotions targeted to the estimated 55,000 Iridium customers. One distributor was even boasting an offer where Iridium customers could trade in their now-useless phones for $495 toward a Globalstar system. Globalstar flaunts a selection of products that are maritime industry-specific.

From the small vessel owner, all the way up to the world's largest cruise ship - Globalstar's satellite service function can provide voice and data communications from as much as 200 miles off- shore U.S. east and west coasts.

Small vessel owners are likely to favor the GSP-1600 tri-mode handset. Due to its crisp digital voice function, this portable hand-held unit can be used as an emergency communications alternative should the onboard radio fail. Used on small fishing boats as a weather monitoring device, the product, which weighs a little more than I 1 ounces, can easily be switched from cellular to satellite mode. The company also touts a maritime fixed phone that is similar to its hands-free car kit. Priced at $999, the GCK 1400 is designed for use with the tri-mode phone. The Qualcomm-manufactured unit is specially weatherized for added protection against water damage.

While Globalstar's maritime base constitutes for just 15 percent of its business, the company is working to boost that number with promotional events sponsored by renowned maritime organizations such as Raytheon. Standing firmly on the fact that Globalstar services are marketed to many niches rather than one mass market, therefore there is no "average customer." The company reaches out to not only vessel owners and operators, but to a division that works to support the maritime world - the oil and gas industry. Those located at offshore drilling rigs and remote drilling locations can look to Globalstar to provide them with a communicable device to provide their home offices with project reports and updates, mainly through Globalstar's GSP 2800/2900, which can be placed on a wall or desk. Ideal for use in remote areas, where drilling rigs are typically located, this model is priced at $2,499.

In addition, larger vessels, typically cruise ships can connect to their internal PBX system for outside voice access at homeport - a cost-effective way to keep the lines of communications open on both ends.

Touting three domestic pricing plans based on a monthly service charge, as well as fees for satellite connection and utilization, Globalstar U.S.A. has developed each plan with various needs in mind, beginning with the Beyond Basic Plan. At $29.99 per month, users will pay a cost of $1.69 per minute for satellite airtime, while the Beyond 100 Plan is $169.99 per month including 100 minutes of satellite airtime with additional minutes costing $1.49. For more reliant users, the Beyond 250 Plan runs at $369.99 with 250 minutes airtime - additional minutes are $1.39. Offered by GUSA agents, and set by GUSA resellers according to market conditions, these fees are non-inclusive of international long distance charges. 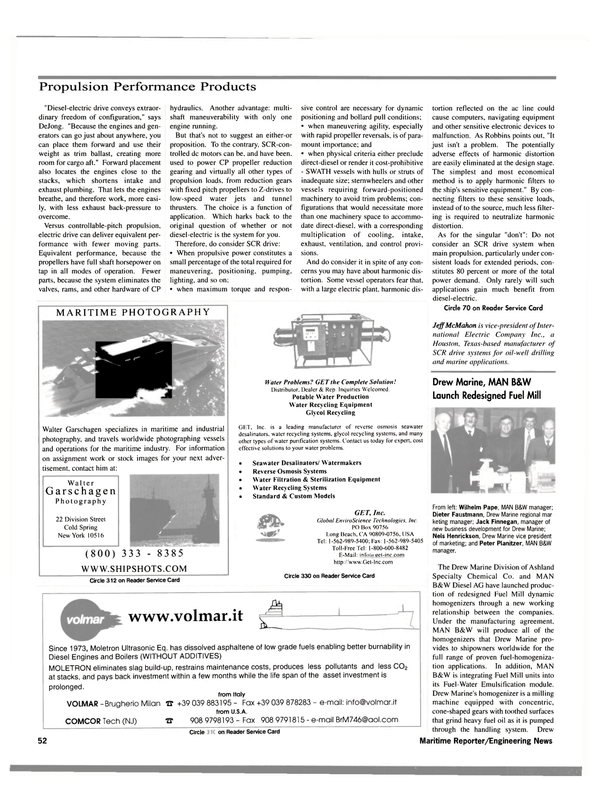 Other stories from April 2000 issue