Gladding-Hearn Shipbuilding, The Duclos Corp., has introduced a fiberglass hull to its line of deep-V steel and aluminum pilot boats.

Designed by C. Raymond Hunt Associates of Boston, the 50-foot one-piece molded hull, which has four watertight compartments, is designed to ABS rules with additional reinforcing in areas subject to high impact during boarding.

The hard chine hull design is based on the popular Delaware class first built by Gladding-Hearn in 1978; 12 pilot boats are in service on the East and Gulf Coasts.

The growing popularity of composite hulls for pilot service prompted the Massachusetts shipyard, which has built more than 300 commercial vessels including 50 pilot boats since its founding in 1955, to add fiberglass to its hull material choices, said company president George Duclos. The benefits of the fiberglass hull are a lower initial cost, quick delivery, low maintenance and simplicity of repair, he explained. The aluminum superstructure still allows custom operations and boarding details, including rooftop platforms or raised plat- forms suspended from the foredeck.

At the deck edge is a welded-aluminum sheer strake, with an integral groove in which there is a generous wall of rubber tendering for absorbing heavy shock loads from boarding operations and eliminating leaks caused by conventional through-bolted rubrails.

In addition to the pilothouse, accommodations include galley, bead and up to four berths.

Power options range from 500 to 1,000-hp single and twin diesel engines reaching 30 knots, with fuel capacity up to 700 gallons.

For free literature on the facilities and capabilities of Gladding-Hearn Shipbuilding, Circle 12 on Reader Service Card 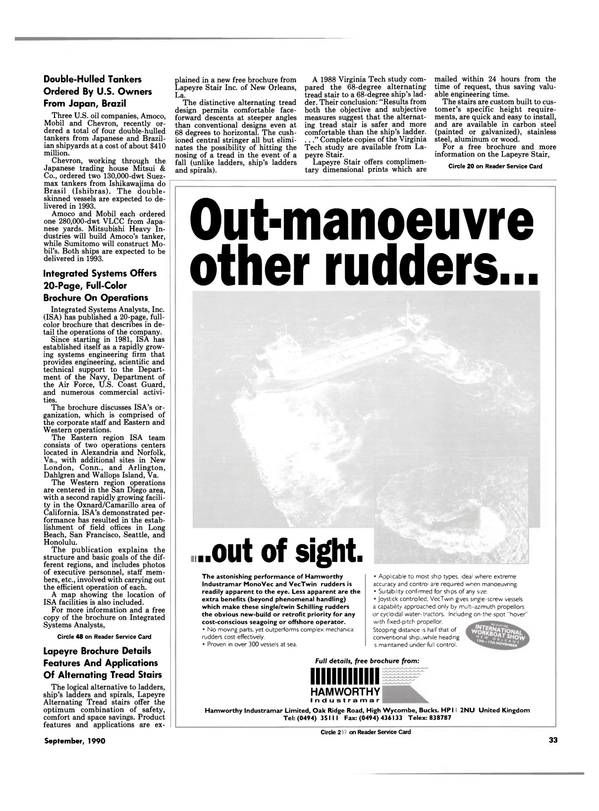