The Crown Princess is the first cruise ship built by Fincantieri since 1964, when it delivered the 29,000- ton Eugenio C. to Costa Shipping company.

The Crown Princess along with her sister Regal Princess were originally ordered by Sitmar Cruises through its Italian company Astramar.

With a gross tonnage of 70,000, the Crown Princess has an overall length of 803 feet, maximum molded breadth of about 106 feet, design draft of 25.7 feet and deadweight of 5,400 tons. She will have a service speed of 19.5 knots Fincantieri collaborated with Italian naval architect Renzo Piano of Studio Piano on the design of the vessel in order to provide the Crown Princess with a unique exterior design.

For the ship's silhouette, Studio Piano took inspiration from the dolphin, with particular emphasis on the profile of the "head," which constitutes a large front dome over the Belvedere Bar/Casino.

The transferring of such a design in a construction phase raised extreme difficulties. Because the dome and the upper deck structure were manufactured entirely of light alloy, while the superstructure is made of steel, suitable protection and welding methods had to be developed in order to ensure a proper connection.

The final positioning phase of the 250-ton-plus dome (60 meters long by 30 meters wide) was particularly delicate.

Another innovative feature of the Crown Princess is her propulsion plant. Designed for worldwide cruising, the vessel will be powered by a highly advanced diesel-electric plant. There will be four 6.6KV, 60- Hz main alternators driven through flexible couplings by four MAN B&W eight-cylinder, in-line L58/64 four-stroke, medium-speed engines, with a maximum continuous rating of 9,720 kw at 400 rpm. These alternators will supply power through transformers to the two 12,000-kw, three-phase synchronous-type propulsion motors, each directly driving a fixed-pitch Lips propeller via shafting. In addition to supplying 6,600/450 volt, 60 Hz electrical power to the propulsion motors, this same power is fed to the motor-driven thrusters and air conditioning compressors, while other motors are generally powered by 440 volts, 60 HZ AC. Other electrical equipment is served by 440/220/115 and 24 volt DC circuits.

The construction of the 14-deck Crown Princess involved the formation of a new work organization inside Fincantieri in order to speed coordination and manage construction of the ship. The ship cost about $275 million, 15 percent of which went to the actual construction of the vessel and the other 85 percent towards completing the machinery, furnishings, etc. The work involved over 150 companies and about 10,000 workers, constituting a wide range of suppliers.

According to company officials, Fincantieri plans to capture as much as 25 percent of the world cruise ship construction market.

Fincantieri has concentrated its cruise ship construction at two yards—the Monfalcone yard and a shipyard located at Marghera.

The Regal Princess, sister of the Crown Princess, is expected to be delivered by the Monfalcone yard in April 1991. The yard is then expected to begin construction of the first of three cruise ships for Holland America Line.

For a free color brochure detailing the shipbuilding capabilities of Fincantieri, Circle 93 on Reader Service Card 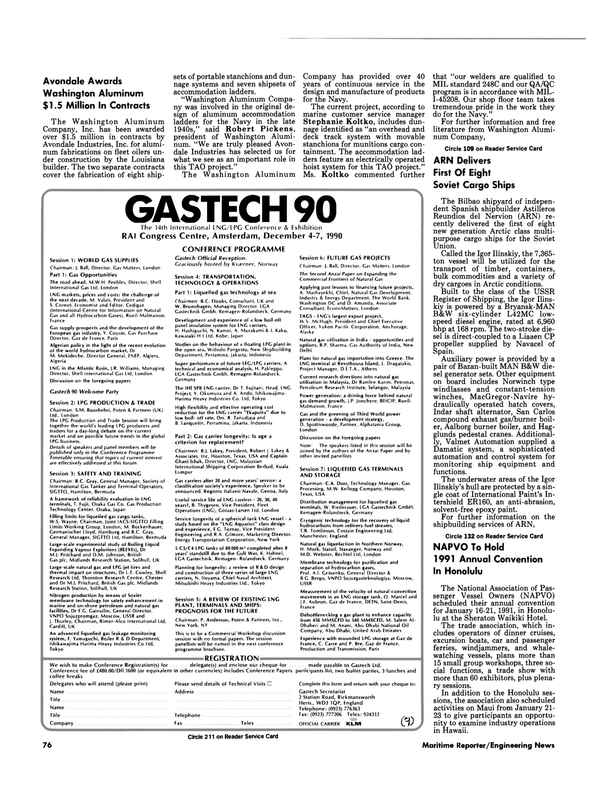