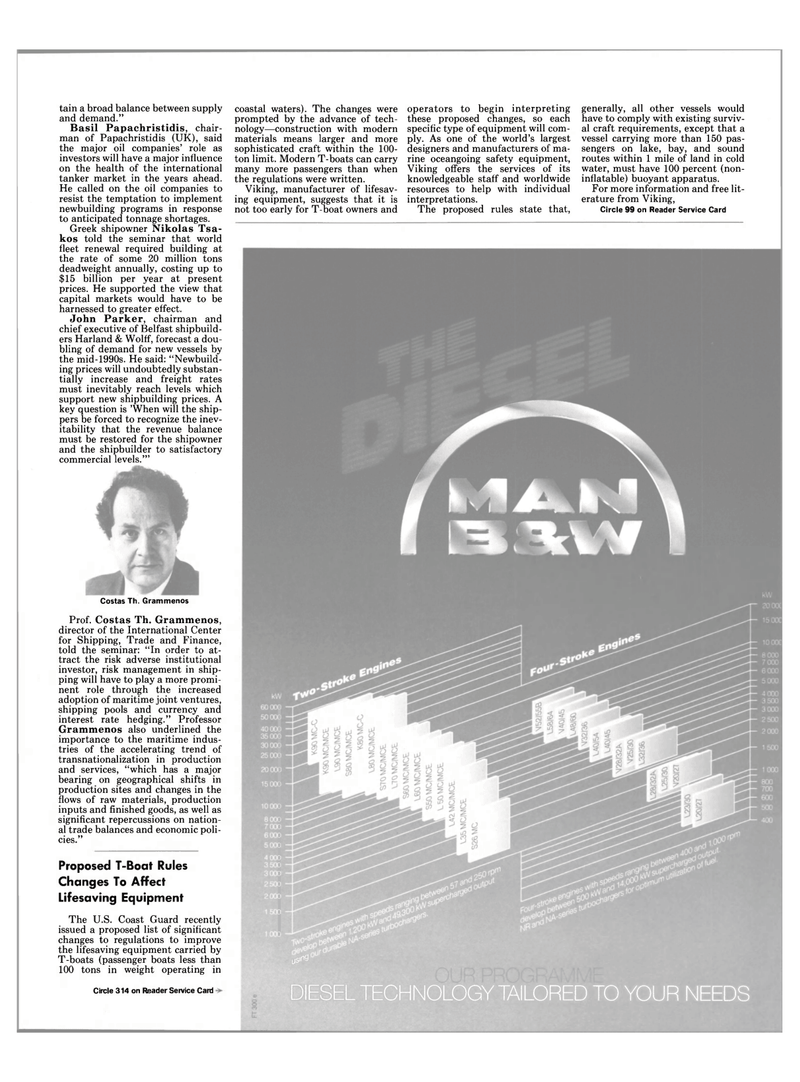 tain a broad balance between supply and demand."

Basil Papachristidis, chair- man of Papachristidis (UK), said the major oil companies' role as investors will have a major influence on the health of the international tanker market in the years ahead.

He called on the oil companies to resist the temptation to implement newbuilding programs in response to anticipated tonnage shortages.

Greek shipowner Nikolas Tsa- kos told the seminar that world fleet renewal required building at the rate of some 20 million tons deadweight annually, costing up to $15 billion per year at present prices. He supported the view that capital markets would have to be harnessed to greater effect.

John Parker, chairman and chief executive of Belfast shipbuild- ers Harland & Wolff, forecast a dou- bling of demand for new vessels by the mid-1990s. He said: "Newbuild- ing prices will undoubtedly substan- tially increase and freight rates must inevitably reach levels which support new shipbuilding prices. A key question is 'When will the ship- pers be forced to recognize the inev- itability that the revenue balance must be restored for the shipowner and the shipbuilder to satisfactory commercial levels."'

Prof. Costas Th. Grammenos, director of the International Center for Shipping, Trade and Finance, told the seminar: "In order to at- tract the risk adverse institutional investor, risk management in ship- ping will have to play a more promi- nent role through the increased adoption of maritime joint ventures, shipping pools and currency and interest rate hedging." Professor

Grammenos also underlined the importance to the maritime indus- tries of the accelerating trend of transnationalization in production and services, "which has a major bearing on geographical shifts in production sites and changes in the flows of raw materials, production inputs and finished goods, as well as significant repercussions on nation- al trade balances and economic poli- cies."

The U.S. Coast Guard recently issued a proposed list of significant changes to regulations to improve the lifesaving equipment carried by

Circle 314 on Reader Service Card coastal waters). The changes were prompted by the advance of tech- nology—construction with modern materials means larger and more sophisticated craft within the 100- ton limit. Modern T-boats can carry many more passengers than when the regulations were written.

Viking, manufacturer of lifesav- ing equipment, suggests that it is not too early for T-boat owners and operators to begin interpreting these proposed changes, so each specific type of equipment will com- ply. As one of the world's largest designers and manufacturers of ma- rine oceangoing safety equipment,

Viking offers the services of its knowledgeable staff and worldwide resources to help with individual interpretations.

The proposed rules state that, generally, all other vessels would have to comply with existing surviv- al craft requirements, except that a vessel carrying more than 150 pas- sengers on lake, bay, and sound routes within 1 mile of land in cold water, must have 100 percent (non- inflatable) buoyant apparatus.

For more information and free lit- erature from Viking,

DIESEL TECHNOLOGY TAILORED TO YOUR NEEDS