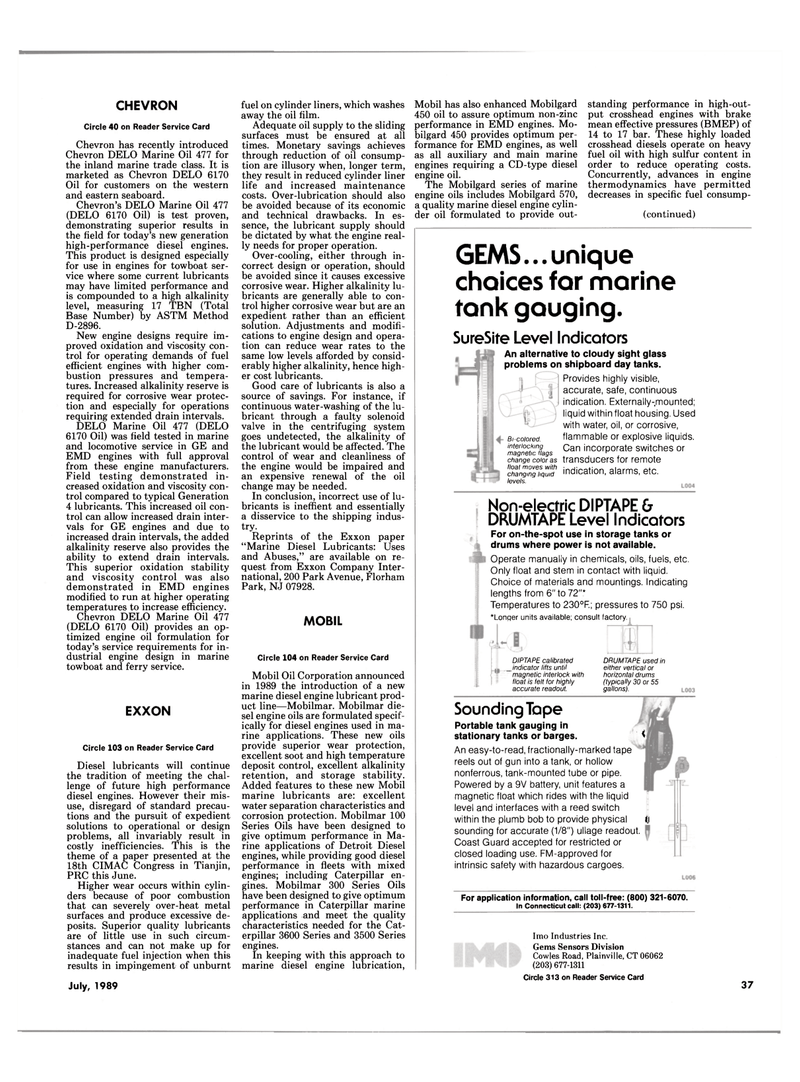 Chevron DELO Marine Oil 477 for the inland marine trade class. It is marketed as Chevron DELO 6170

Oil for customers on the western and eastern seaboard.

This product is designed especially for use in engines for towboat ser- vice where some current lubricants may have limited performance and is compounded to a high alkalinity level, measuring 17 TBN (Total

Base Number) by ASTM Method

EMD engines with full approval from these engine manufacturers.

This superior oxidation stability and viscosity control was also demonstrated in EMD engines modified to run at higher operating temperatures to increase efficiency.

Diesel lubricants will continue the tradition of meeting the chal- lenge of future high performance diesel engines. However their mis- use, disregard of standard precau- tions and the pursuit of expedient solutions to operational or design problems, all invariably result in costly inefficiencies. This is the theme of a paper presented at the 18th CIMAC Congress in Tianjin,

Higher wear occurs within cylin- ders because of poor combustion that can severely over-heat metal surfaces and produce excessive de- posits. Superior quality lubricants are of little use in such circum- stances and can not make up for inadequate fuel injection when this results in impingement of unburnt fuel on cylinder liners, which washes away the oil film.

Adequate oil supply to the sliding surfaces must be ensured at all times. Monetary savings achieves through reduction of oil consump- tion are illusory when, longer term, they result in reduced cylinder liner life and increased maintenance costs. Over-lubrication should also be avoided because of its economic and technical drawbacks. In es- sence, the lubricant supply should be dictated by what the engine real- ly needs for proper operation.

Over-cooling, either through in- correct design or operation, should be avoided since it causes excessive corrosive wear. Higher alkalinity lu- bricants are generally able to con- trol higher corrosive wear but are an expedient rather than an efficient solution. Adjustments and modifi- cations to engine design and opera- tion can reduce wear rates to the same low levels afforded by consid- erably higher alkalinity, hence high- er cost lubricants.

Good care of lubricants is also a source of savings. For instance, if continuous water-washing of the lu- bricant through a faulty solenoid valve in the centrifuging system goes undetected, the alkalinity of the lubricant would be affected. The control of wear and cleanliness of the engine would be impaired and an expensive renewal of the oil change may be needed.

In conclusion, incorrect use of lu- bricants is ineffient and essentially a disservice to the shipping indus- try.

In keeping with this approach to marine diesel engine lubrication,

For on-the-spot use in storage tanks or drums where power is not available.

Choice of materials and mountings. Indicating lengths from 6" to 72"*

DRUMTAPE used in either vertical or horizontal drums (typically 30 or 55 gallons).

An easy-to-read, fractionally-marked tape reels out of gun into a tank, or hollow nonferrous, tank-mounted tube or pipe.

Powered by a 9V battery, unit features a magnetic float which rides with the liquid level and interfaces with a reed switch within the plumb bob to provide physical fl sounding for accurate (1/8") ullage readout.

Coast Guard accepted for restricted or closed loading use. FM-approved for intrinsic safety with hazardous cargoes.

Can incorporate switches or transducers for remote indication, alarms, etc.