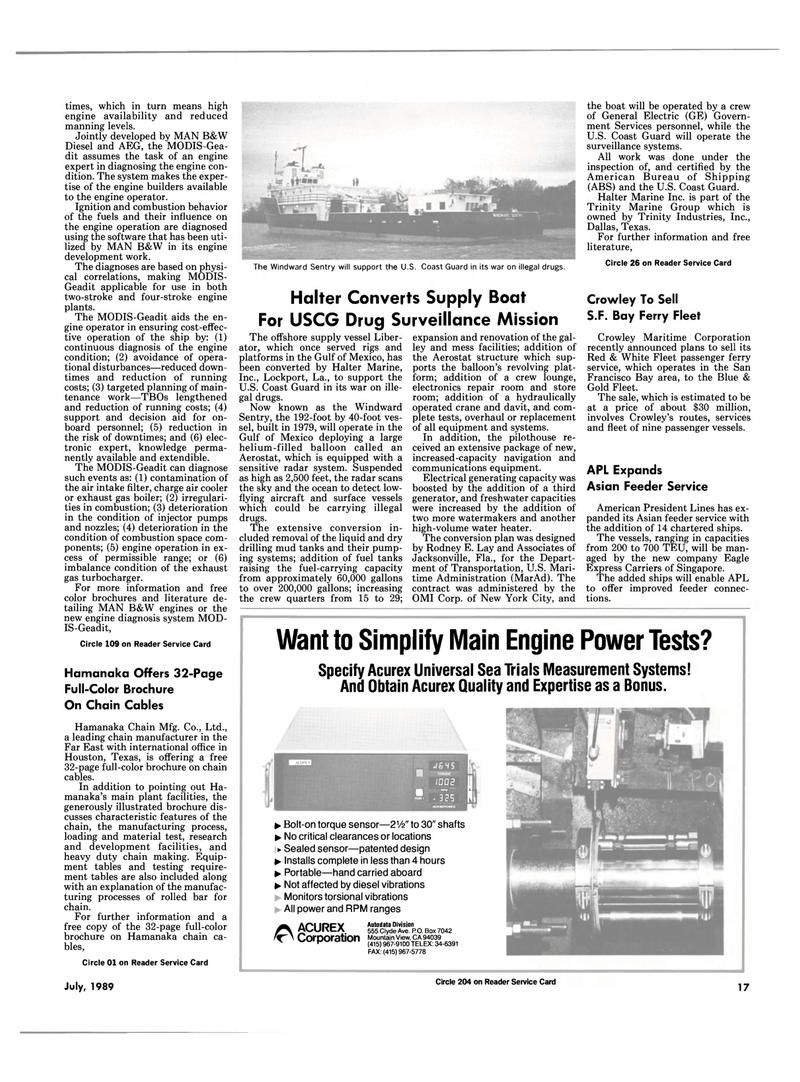 The Windward Sentry will support the U.S. Coast Guard in its war on illegal drugs.

Diesel and AEG, the MODIS-Gea- dit assumes the task of an engine expert in diagnosing the engine con- dition. The system makes the exper- tise of the engine builders available to the engine operator.

Ignition and combustion behavior of the fuels and their influence on the engine operation are diagnosed using the software that has been uti- lized by MAN B&W in its engine development work.

The diagnoses are based on physi- cal correlations, making MODIS-

Geadit applicable for use in both two-stroke and four-stroke engine plants.

The MODIS-Geadit aids the en- gine operator in ensuring cost-effec- tive operation of the ship by: (1) continuous diagnosis of the engine condition; (2) avoidance of opera- tional disturbances—reduced down- times and reduction of running costs; (3) targeted planning of main- tenance work—TBOs lengthened and reduction of running costs; (4) support and decision aid for on- board personnel; (5) reduction in the risk of downtimes; and (6) elec- tronic expert, knowledge perma- nently available and extendible.

Far East with international office in

In addition to pointing out Ha- manaka's main plant facilities, the generously illustrated brochure dis- cusses characteristic features of the chain, the manufacturing process, loading and material test, research and development facilities, and heavy duty chain making. Equip- ment tables and testing require- ment tables are also included along with an explanation of the manufac- turing processes of rolled bar for chain.

For further information and a free copy of the 32-page full-color brochure on Hamanaka chain ca- bles,

The offshore supply vessel Liber- ator, which once served rigs and platforms in the Gulf of Mexico, has been converted by Halter Marine,

Inc., Lockport, La., to support the

U.S. Coast Guard in its war on ille- gal drugs.

Now known as the Windward

Gulf of Mexico deploying a large helium-filled balloon called an

Aerostat, which is equipped with a sensitive radar system. Suspended as high as 2,500 feet, the radar scans the sky and the ocean to detect low- flying aircraft and surface vessels which could be carrying illegal drugs.

The extensive conversion in- cluded removal of the liquid and dry drilling mud tanks and their pump- ing systems; addition of fuel tanks raising the fuel-carrying capacity from approximately 60,000 gallons to over 200,000 gallons; increasing the crew quarters from 15 to 29; expansion and renovation of the gal- ley and mess facilities; addition of the Aerostat structure which sup- ports the balloon's revolving plat- form; addition of a crew lounge, electronics repair room and store room; addition of a hydraulically operated crane and davit, and com- plete tests, overhaul or replacement of all equipment and systems.

In addition, the pilothouse re- ceived an extensive package of new, increased-capacity navigation and communications equipment.

The conversion plan was designed by Rodney E. Lay and Associates of

Jacksonville, Fla., for the Depart- ment of Transportation, U.S. Mari- time Administration (MarAd). The contract was administered by the

OMI Corp. of New York City, and the boat will be operated by a crew of General Electric (GE) Govern- ment Services personnel, while the

All work was done under the inspection of, and certified by the

American Bureau of Shipping (ABS) and the U.S. Coast Guard.

Halter Marine Inc. is part of the

Trinity Marine Group which is owned by Trinity Industries, Inc.,

For further information and free literature,

Francisco Bay area, to the Blue &

The sale, which is estimated to be at a price of about $30 million, involves Crowley's routes, services and fleet of nine passenger vessels.

American President Lines has ex- panded its Asian feeder service with the addition of 14 chartered ships.

The vessels, ranging in capacities from 200 to 700 TEU, will be man- aged by the new company Eagle

And Obtain Acurex Quality and Expertise as a Bonus.

All power and RPM ranges