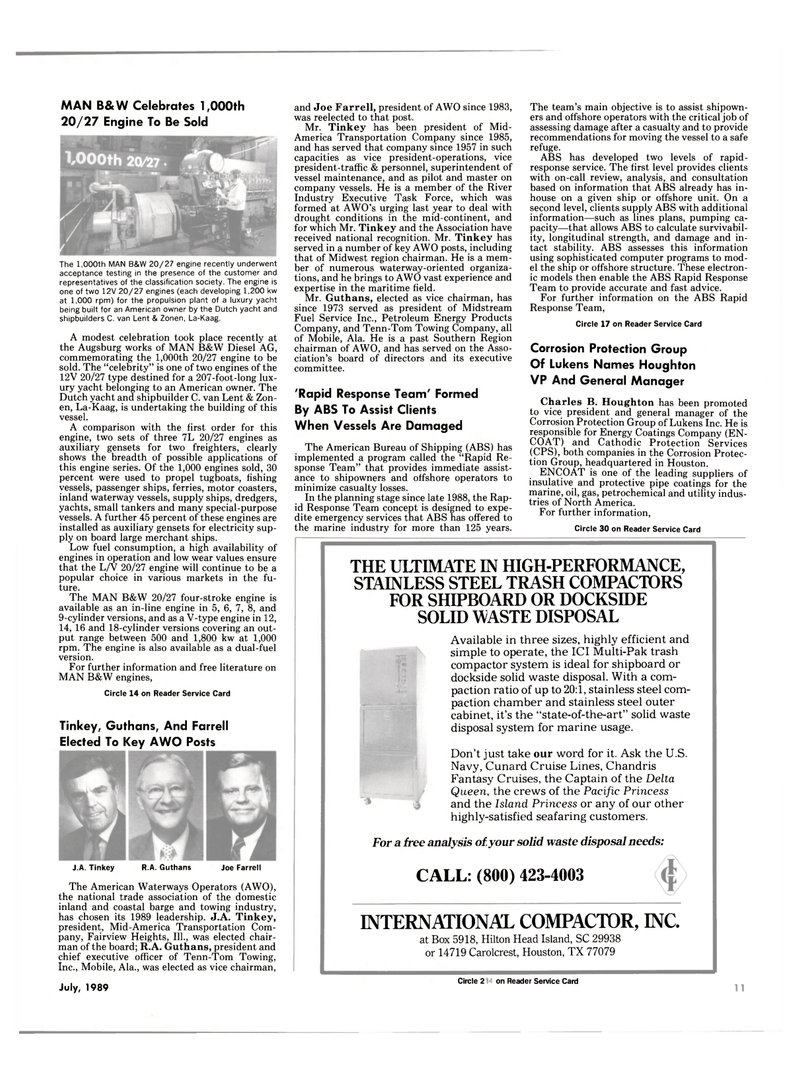 The 1,000th MAN B&W 20/27 engine recently underwent acceptance testing in the presence of the customer and representatives of the classification society. The engine is one of two 12V 20/27 engines (each developing 1,200 kw at 1,000 rpm) for the propulsion plant of a luxury yacht being built for an American owner by the Dutch yacht and shipbuilders C. van Lent & Zonen, La-Kaag.

A modest celebration took place recently at the Augsburg works of MAN B&W Diesel AG, commemorating the 1,000th 20/27 engine to be sold. The "celebrity" is one of two engines of the 12V 20/27 type destined for a 207-foot-long lux- ury yacht belonging to an American owner. The

A comparison with the first order for this engine, two sets of three 7L 20/27 engines as auxiliary gensets for two freighters, clearly shows the breadth of possible applications of this engine series. Of the 1,000 engines sold, 30 percent were used to propel tugboats, fishing vessels, passenger ships, ferries, motor coasters, inland waterway vessels, supply ships, dredgers, yachts, small tankers and many special-purpose vessels. A further 45 percent of these engines are installed as auxiliary gensets for electricity sup- ply on board large merchant ships.

Low fuel consumption, a high availability of engines in operation and low wear values ensure that the L/V 20/27 engine will continue to be a popular choice in various markets in the fu- ture.

For further information and free literature on

Inc., Mobile, Ala., was elected as vice chairman, and Joe Farrell, president of AWO since 1983, was reelected to that post.

Mr. Tinkey has been president of Mid-

America Transportation Company since 1985, and has served that company since 1957 in such capacities as vice president-operations, vice president-traffic & personnel, superintendent of vessel maintenance, and as pilot and master on company vessels. He is a member of the River

Industry Executive Task Force, which was formed at AWO's urging last year to deal with drought conditions in the mid-continent, and for which Mr. Tinkey and the Association have received national recognition. Mr. Tinkey has served in a number of key AWO posts, including that of Midwest region chairman. He is a mem- ber of numerous waterway-oriented organiza- tions, and he brings to AWO vast experience and expertise in the maritime field.

Mr. Guthans, elected as vice chairman, has since 1973 served as president of Midstream

Company, and Tenn-Tom Towing Company, all of Mobile, Ala. He is a past Southern Region chairman of AWO, and has served on the Asso- ciation's board of directors and its executive committee. 'Rapid Response Team' Formed

By ABS To Assist Clients

When Vessels Are Damaged

The American Bureau of Shipping (ABS) has implemented a program called the "Rapid Re- sponse Team" that provides immediate assist- ance to shipowners and offshore operators to minimize casualty losses.

In the planning stage since late 1988, the Rap- id Response Team concept is designed to expe- dite emergency services that ABS has offered to the marine industry for more than 125 years.

The team's main objective is to assist shipown- ers and offshore operators with the critical job of assessing damage after a casualty and to provide recommendations for moving the vessel to a safe refuge.

ABS has developed two levels of rapid- response service. The first level provides clients with on-call review, analysis, and consultation based on information that ABS already has in- house on a given ship or offshore unit. On a second level, clients supply ABS with additional information—such as lines plans, pumping ca- pacity—that allows ABS to calculate survivabil- ity, longitudinal strength, and damage and in- tact stability. ABS assesses this information using sophisticated computer programs to mod- el the ship or offshore structure. These electron- ic models then enable the ABS Rapid Response

For further information on the ABS Rapid

Charles B. Houghton has been promoted to vice president and general manager of the

ENCOAT is one of the leading suppliers of insulative and protective pipe coatings for the marine, oil, gas, petrochemical and utility indus- tries of North America.

THE ULTIMATE IN HIGH-PERFORMANCE,

FOR SHIPBOARD OR DOCKSIDE

Available in three sizes, highly efficient and simple to operate, the ICI Multi-Pak trash compactor system is ideal for shipboard or dockside solid waste disposal. With a com- paction ratio of up to 20:1, stainless steel com- paction chamber and stainless steel outer cabinet, it's the "state-of-the-art" solid waste disposal system for marine usage.

Don't just take our word for it. Ask the U.S.

Fantasy Cruises, the Captain of the Delta

Queen, the crews of the Pacific Princess and the Island Princess or any of our other highly-satisfied seafaring customers.

For a free analysis of your solid waste disposal needs: