—Report A v a i l a b l e— Over the years, numerous experiments have taken place in ship towage. One concept, however, has remained unchanged, that being the Voith water tractor. This year the 500th Voith water tractor is under construction, which provides an ideal opportunity to reflect on what led to the development of this tug type and its ever increasing prominence within the towage industry.

The problems and risks involved in ship-handling are well known.

With the development of the Voith- Schneider propeller, it was possible to depart from traditional ideas, i.e., of having the screw and rudder aft, and to venture to design a system which initially takes into account the problems encountered in shiphandling.

The special characteristics of the Voith-Schneider propulsion system which created an effective solution to existing problems are reviewed, as follows: - The axis of rotation of the propeller is perpendicular to the thrust plane.

- Within this plane the thrust can be infinitely varied in magnitude and direction.

- The blade profiles are arranged parallel to the axis of rotation and are therefore untwisted along their entire length. Thus zero thrust is clearly defined when the blade pitch is nil.

- Propeller pitch and thus thrust are controlled in respect of magnitude and direction according to rectangular coordinates. By a combination of the two coordinates, thrust changes can pass quickly through zero without creating any extraneous thrust in undesired direction.

- Because of its vertical axis, the propeller position can be chosen to optimize the correlation with the hull in respect of a particular task.

- The VSP is extremely robust due to the very low rotational speed of the rotor.

The free arrangement of the Voith-Schneider propeller under the vessel was ruled out because of the possible problems of grounding, lateral contacts and the crossing of chains and towlines. These potential problems were, however, countered with a guard plate which protects the blades and at the same time acts as a nozzle plate.

Thus, the tractor principle came into being which still exists fundamentally unchanged today.

The introduction of the Voith water tractor in ship-handling service proved to be a significant step toward improving ship safety. The first vessel of a new generation, now under construction in Antwerp, will be the 500th Voith water tractor to be built and in the 35-year history of this type of vessel, operational in about 100 ports around the world.

For further information and a free copy of the article on the 500th Voith water tractor Circle 46 on Reader Service Card *The above article is taken from an essay, "500th Voith Water Tractor—A Brief Review," by Dipl.-Ing. U. Sturmhofel, project manager in the Marine Engineering Division at J.M. Voith GmbH, Heidenheim. 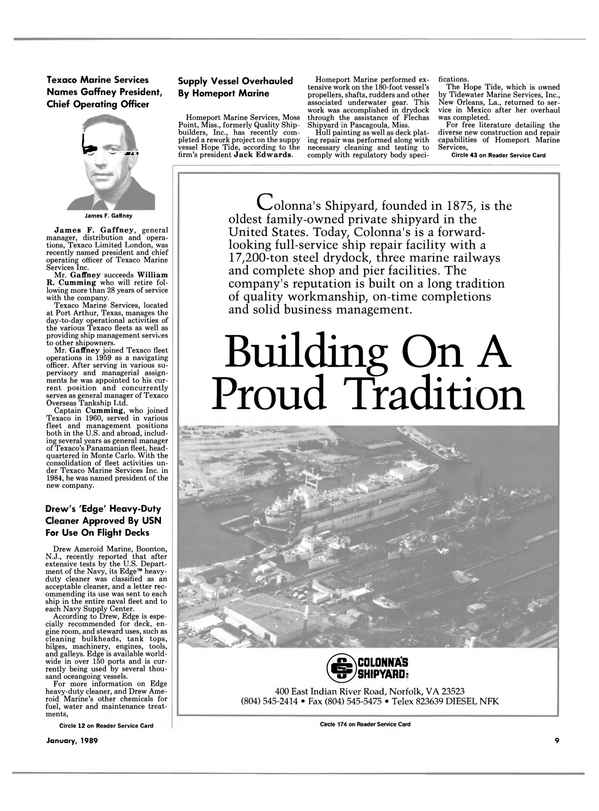