By James B. Cain*

*Editor's Note: Mr. Cain is chairman of the board of Nautilus Submarines of America, Inc., a Fort Pierce, Fla.-based company specializing in the manufacture, development, and marketing of tourist passenger submarines.

The firm is currently considering joint venture partnerships for operation of the submarines with a variety of investors. Mr.

As tourist passenger submarines troll undersea reefs and shipwrecks off the coasts of Caribbean islands, their operators are reaping treasure in the form of extremely high profit margins.

Now, for the first time, these lucrative attractions are presenting opportunities for investors in the U.S., and there is plenty of room for growth and expansion.

In fact, in a recent Time magazine article, industry analysts predicted a $250-million-per-year market with more than 100 passenger submarine operations by early next decade.

The industry first experienced a period of rapid growth during the early 1980s, when manned submersibles in the offshore oil industry were effectively replaced by cost efficient Remotely Operated Vehicles (ROVs).

Perceptive engineers and investors realized that this inactive submarine fleet created an opportunity for the general public to enjoy the previously exclusive experience of underwater submarine exploration.

Larger multipassenger submarines were developed to serve the growing consumer demand, and the first multipassenger tourist submarine began operation in the Cayman Islands in 1986.

The potential revenue that the attractions can generate is substantial; the submarines dive at least five times a day, operate at approximately 90 percent capacity, cost about $50 per person per ride, and carry about 50 people. The standard submarine costs about $2.5 million, and investors can expect to turn a large profit within two years or less.

However, until recently, the Jones Act somewhat restricted the expansion of the submarine operations off the coasts of the continental U.S. and Hawaii. Anyone wanting to become involved in this growing industry in the U.S. is required to comply with the regulations and build the submarines here with approval and certification by the U.S.

Although there are manufacturers in the U.S. that specialize in underwater technology, few have actually built submarines oriented toward carrying passengers for recreational purposes.

To overcome this obstacle, one option is to establish a business relationship with an experienced manufacturer overseas, and enlist a technology transfer. Another option would be to team up with professionals in the existing commercial submarine industry in the U.S. and attempt to develop the vessels. Both options involve quite a bit of time, risk, and money.

The simplest, easiest way to enter the industry and take advantage of the outstanding profitability is to join forces with a company that has already purchased the technology and that has the full capabilities of manufacturing the submarines at a U.S. location.

This way, an investor can benefit from proven expertise not only in the manufacturing, but also in the marketing and design of the submarines.

The design of the submarines generally resembles that of an airplane and the interior can be customized to meet specific tastes and requirements based on the operating location.

Viewpoints should be large and plentiful to ensure an open, serene atmosphere, and the design should incorporate ample headroom space.

The submarines can descend to depths of 250 feet. Electrically powered thrusters propel the vessels and allow precise maneuvering to preserve the underwater surroundings.

There are several criteria for the site selection. Again, it is wise to work with a firm that has previously conducted feasibility studies and that is fully aware of the myriad conditions that compose an ideal dive site.

For example, the site should have relatively calm waters to facilitate the transfer of passengers from the subtender to the submarine. Of course, the water should be clear for maximum visibility, and the area should have a deep-water harbor.

With the proven potential for high profitability and success of the submarines on the handful of islands that currently offer the attraction, the market is ripe for additional investors to enter the industry at sites both in the U.S. and worldwide. 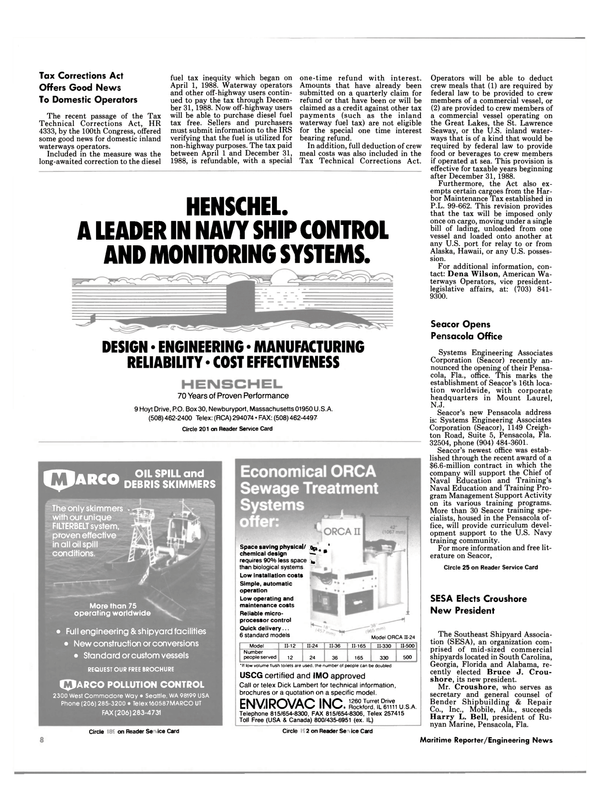