The Trinity Marine Group has been awarded a contract to build a 183-foot diner boat for Hornblower Dining Yachts of California. The new flagship of the Hornblower fleet, largest of its type on the West Coast, will operate out of the Los Angeles Harbor beginning in the spring of 1989.

While new in every aspect, the California Hornblower will have a nostalgic "look," as she is patterned after turn-of-the-century steampowered vessels. The new vessel will feature three air-conditioned decks, each with a dual service mahogany bar. The top deck, called the Captain's Lounge, will be tailored for business meetings of up to 250 people.

The boat will be available for private group charters and individually ticketed cruises open to the public.

The California Hornblower will be 183 feet 3 inches in length, with a 40.5-foot beam (molded), and 11- foot molded depth with an approximate 7-foot draft.

She will be powered by two Cummins KT19M marine engines with a continuous rating of 510 bhp each at 2,100 rpm. They will drive through Twin Disc MG-518 reverse/reduction gears with a ratio of 4.06:1.

The California Hornblower will be built under U.S. Coast Guard subchapter "T" rules and regulations and will meet American Bureau of Shipping (ABS) standards.

The California Hornblower is now under construction at Trinity's Moss Point Marine, Inc., in Escatawpa, Miss.

John Dane III, president of the Trinity Marine Group, said the selection of Moss Point Marine to build the California Hornblower reflects the Group's experience in building a wide range of dinner/ cruise and excursion vessels for use on both coasts and on the nation's inland waterways.

For more information and free literature on the facilities and capabilities of the Trinity Marine Group, Circle 51 on Reader Service Card 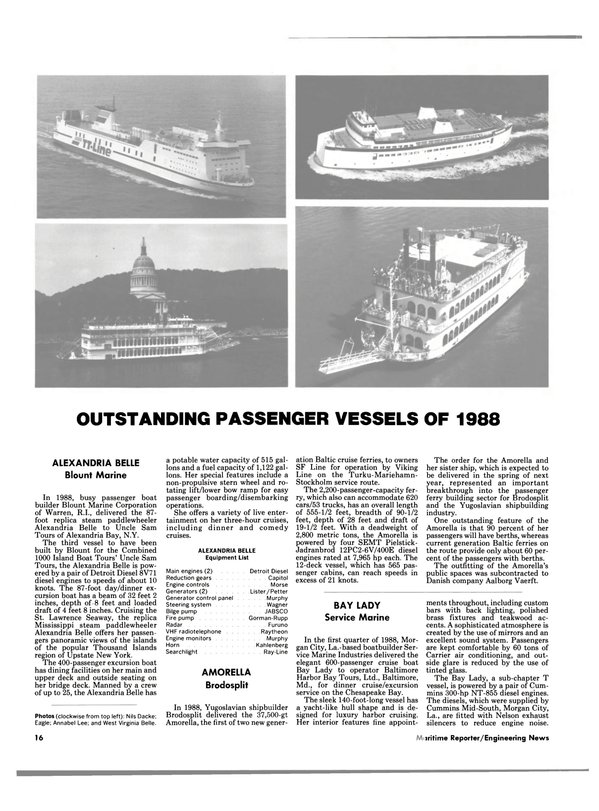