The liquefied gas shipping industry (LNG and LPG) has staged a fairly remarkable recovery in the last couple of years, both in terms of the volume of cargo moved by sea, and the operating profitability of ships involved in these trades. Now, a new Report from Drewry Shipping Consultants—"Liquefied Gas"— suggests that even better times may be ahead for gas shipping. This optimism is based on a thorough analysis of both market sectors, including the outlook for the main chemical gases.

Taking LNG first, it is clear that the market has responded positively to the collapse in oil prices in 1986.

Indeed, some significant changes have taken place in pricing formulae and contract terms which have had a beneficial impact on trade. To the extent that several dormant LNG contracts are likely to be reactivated, while other existing agreements could be expanded. As such, seaborne movements of LNG, which were 87 million cubic meters in 1987, are forecast to rise to 116 million cubic meters by 1992. Beyond 1992 trade should continue to expand as new exports schemes, such as the Nigeria project, come on stream. Already one major ship operator—Shell—has bought or taken purchase options on seven vessels which are currently idle, and the pool of tankers available for new trades has contracted sharply in recent months. In short, the existing LNG fleet will be unable to cope with the additional demand for shipping services, particularly if imports to the United States rise as quickly as forecast. Newbuilding orders across the LNG carrier size spectrum therefore cannot be ruled out, and the Report indicates where and when tonnage will be required.

For LPG, the picture is much the same. Seaborne movements have increased every year since 1980 (with the sole exception of 1983), rising from 16.3 million tons in 1980 to 27 million tons in 1987. While increasing trade is a key factor in the current buoyancy of the freight market, it is not the whole explanation. At least part of the reason for the improvement in market conditions comes from the supply side, as there has been a conspicuous lack of newbuilding activity since 1984. Also, the number of companies operating LPG tankers has contracted sharply and this has been a further factor pushing freight rates in the right direction. For example, time-charter rates for a 50,000-cubic-meter ship averaged $490,000 a month in 1987 compared with $350,000 a month in 1986.

In the future, seaborne movements of LPG are expected to continue growing because of increasing demand for imported LPG in Japan and the United States. Drewry's figures suggest that trade will grow by 4-6 percent per annum, depending on the year in question, in the period up to 1992. At this rate of increase, newbuildings will be required, as the LPG tonnage surplus declined to a mere 0.5 million cubic meters in 1987, compared with 2.6 million cubic meters in 1984.

"Liquefied Gas Shipping—are there Even Better Times Ahead?" is published by Drewry Shipping Consultants Ltd. and is the fourth in a series of 10 reports produced under the "Seaborne Trade and Transport" (STAT) title in 1988. Individ- ual copies of this Report are available at £160 or US$300 (North America only). Alternatively, the whole series is priced at £590. 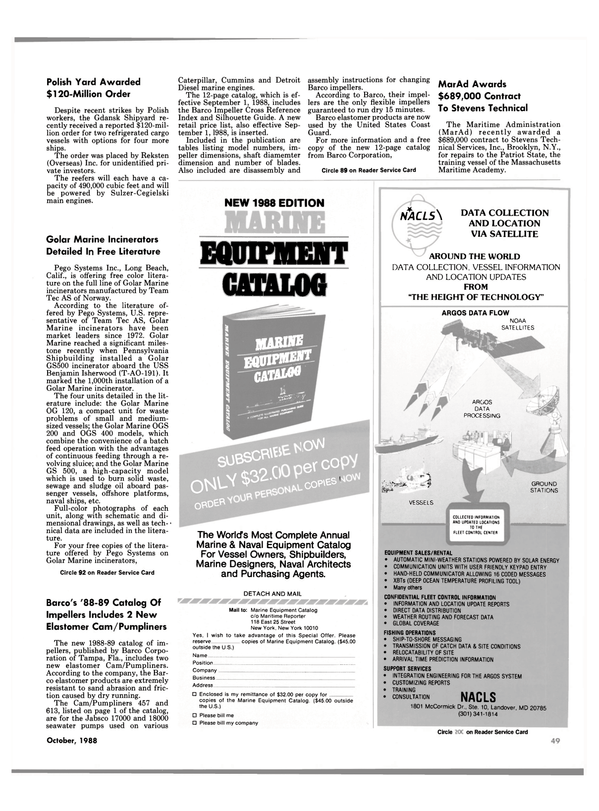