Boston, Massachusetts, October 12-15 One of the world's largest fishing expositions featuring the latest fishing gear and equipment, marine electronics, engines and boats, Fish Expo '88, will be held at the Bayside Exposition Center in Boston, Mass., October 12-15, 1988.

Sponsored by National Fisherman Expositions, Fish Expo returns to Boston after its record-breaking showing last year in Seattle, when it drew over 24,000 marine industry representatives from over 60 countries and more than 800 exhibit booths. The trade show alternates between Seattle and Boston.

This year, over 700 exhibitors from 20 countries are expected to be displaying their products to the international fishing community. Fish Expo '88, which is being held for the 22nd time, is expected to be the largest on the East Coast in many years. The show organizers expect more than 15,000 vistors to attend the four-day event.

Among the exhibitors will be Robertson-Shipmate, who is expected to introduce its AP-45 fishing boat autopilot, which features a unique "work" mode designed specifically for fishing use. The company will also display its awardwinning AP200DL and AP-9 top-ofthe- line autopilot.

At Booth 319 at Fish Expo, Alfa- Laval will introduce two new pieces of equipment for smaller vessels— the JWP-16-C40 freshwater distiller and an ice machine for trawlers and fishboats. The flake ice produced by the Alfa-Laval ice machine keeps the fish at an ideal temperature without freezing it.

Exhibitors from Fish Expo '87 reported that sales exceeded all their expectations. John Sackton, marketing manager for Baader North America Corporation, said "Excellent show. Fish Expo was the best in years. We are very pleased with the quality and quantity of the attendance and with the traffic through our booths." According to Paul Brunette, director of marketing for North American Marine Jet, Inc., Fish Expo '87 was a success. "We used the show to introduce our new TraktorJet propulsion system and sold 24 units at the show amounting to over $400,000 in sales and we took 140 solid leads," he said.

As in the 1987 show, the editors of National Fisherman have developed an interesting free seminar program which focuses on issues directly affecting fishermen. The seminars will cover the following topics: "Fisheries Enforcement," examines the problems of illegal fishing; "Fish Farming," looks at the boom in aquaculture; "Marine Weather Service Forum," offers fishermen an opportunity to voice their recommendations to the 19th New England Marine Users Forum for improving marine weather services; "Drugs," examines the Government's Zero Tolerance program and the possibility of future drug testing; "Ocean dumping," the battle by fishermen and environmentalists to close various ocean dump sites which are polluting beaches and killing marine life; and "Marine Mammals," examines the regulations protecting certain species. 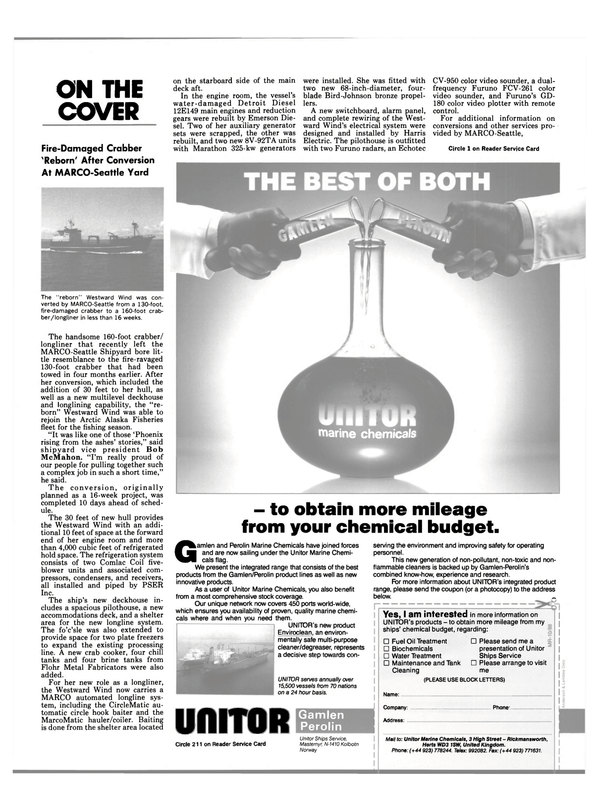