The selection of Con-Tech as the sole supplier of the entire electrical component package is significant because it is rare that one manufacturer produces the wide variety of controls necessary to outfit a ship of an LSV's size, 274 feet overall length, and then be able to supply the equipment at a competitive price.

Similar in design to World War II landing craft, LSVs have RO/RO cargo capability with a wide variety of systems powered and operated electrically—from the bow loading ramp to the steering gear at the stern.

Michael Roberts, president of MTR Design Consultants, Metarie, La., was assigned the critical job of designing the major electrical and control systems on board the LSVs.

Mr. Roberts put together a package consisting of the electrical Iinline diagrams and load specifications for the main and auxiliary generators, electrical distribution panels and the various horsepower ratings of the servo control motors on the board the vessel. The package was then sent out for bids to certain suppliers who are familiar with this kind of project. After reviewing the bids, Moss Point and MTR selected Con-Tech.

"When we reviewed the bids," said Mr. Roberts, "we decided to go with Con-Tech because they offered the low bid and all the switching, distribution and control components were specified from a single, well-known manufacturer—Siemens." Harold Thibodeaux, president of Con-Tech, said, "Working with MTR to develop the necessary circuitry and controls diagrams came first. The next step was to procure the equipment from Siemens, then assemble the equipment within our facility. We then apply our expertise and technology to the already existing Siemens technology and put together a marine package." Con-Tech was contracted to develop and supply materials and equipment in three general categories— a ship service switchboard design, a complete listing of components, as well as the components themselves.

A five-section motor control center handles power and reduced-voltage distribution to the various individual motor starter controls. Approximately 20 reduced-voltage, single- and three-phase starters activate the steering gear, ventilation equipment, air compressors and many other systems on board the vessels.

Mr. Thibodeaux said the success of this project was due in part to the benefits realized from sourcing controls from a single supplier.

"First of all, our bid situation was greatly enhanced because we were able to source from one supplier.

Secondly, the cooperation from Gerry Thomas, Siemens sales engineer, also went a long way in providing us with the numbers we needed to win the contract." For free literature detailing the full line of Siemens electrical control components offered by Con- Tech Power Systems, Circle 108 on Reader Service Card 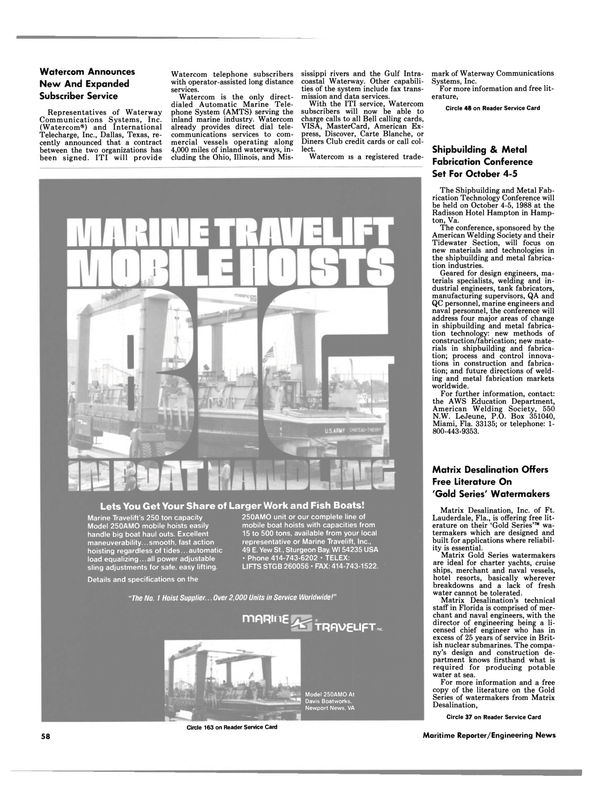