An agreement for change of ownership has been reached between A/S Wichmann of Rubbestadneset, Norway, Wartsila Diesel, and a local group of shipowners and yards. The agreement has been approved by the Norwegian Industrial Fund and Department of Industry, and sanctioned by the Norwegian Cabinet.

The agreement calls for forming a new company—Wartsila-Wichmann Diesel A/S—that will take over the factory at Rubbestadneset.

Oy Wartsila AB will be the major shareholder of the new company; the remaining share capital will be supplied by the local group of shipowners and yards, as well as by employees. The new company will have all rights to manufacture Wichmann products.

Wartsila-Wichmann will continue diesel engine production, and will conduct an effective after-sales activity including service, sales of spare parts, and ship repair work.

Controllable-pitch propellers and remote control systems are to be sold worldwide as part of complete propulsion systems.

Marketing of the new WX28 heavy fuel engine will be concentrated in Norway, Iceland, and Faroe Island. This engine will also be sold to Norwegian shipowners building abroad, to Norwegian yards building for foreign owners, and to former Wichmann customers all over the world.

For additional information and free literature on the new company and its product lines, Circle 92 on Reader Service Card 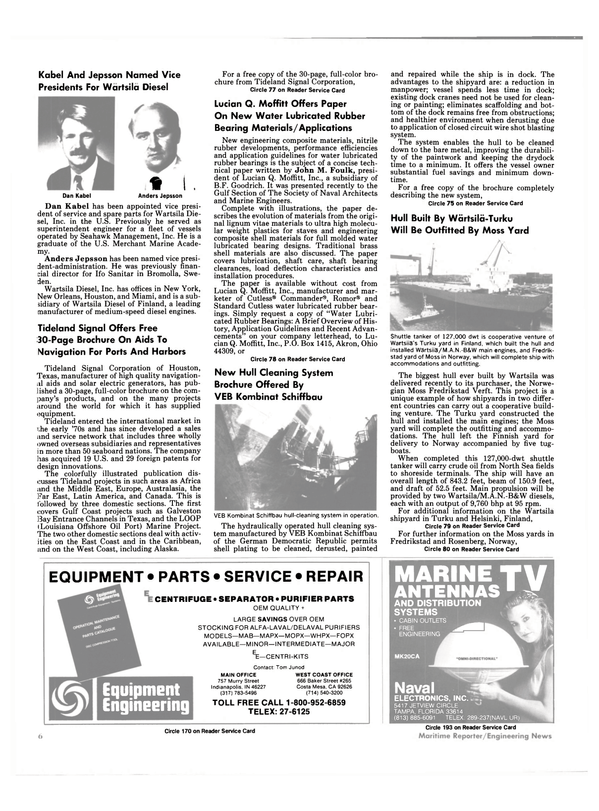