The U.S. Air Force recently accepted a 41-foot Parasail Training Craft constructed by MonArk Boat Company of Monticello, Ark., following testing of the boat on Lake DeGray. The craft was loaded aboard a truck in Monticello for delivery to Homestead Air Force Base in Florida.

The first of nine Parasail boats to be constructed by MonArk under a $2.2-million contract with the Naval Sea Systems Command, the new craft was approved after two days of tests conducted by the 3613th Combat Crew Training Squadron from Homestead. These boats will be used to replace an aging fleet of smaller, slower parasail craft being used at Air Force survival school, according to John Smith, Mon- Ark's national sales manager. The craft was designed by Timothy Graul of Graul Marine Design, Sturgeon Bay, Wise.

Subjects taught at the survival school include parachuting techniques, proper use of survival equipment, search and rescue procedures, medical and psychological aspects of water survival, subsistence, and hazardous marine life.

The new parasail craft will achieve a top speed of about 30 mph. Propulsion power is provided by twin 435-bhp Detroit Diesel 8V71 TI engines. Each boat is fitted with a hydraulic winch and a tow reel that allows for the operation of parasailing equipment to simulate a bailout of aircrew members. The winch releases line, retrieves line, and locks it in place. After the student contacts the water, the vessel is used to recover and/or stand by the student and his equipment.

Since the Water Survival School became fully operational in 1971, more than 70,000 students have graduated from its three-day course.

Personnel trained at the school include active duty Air Force, Air National Guard, Reserve members, and NASA personnel, which include several groups of future astronauts, as well as selected personnel from the Army and Navy, and several allied countries.

For additional information and free literature on MonArk's facilities and activities, Circle 11 on Reader Service Card 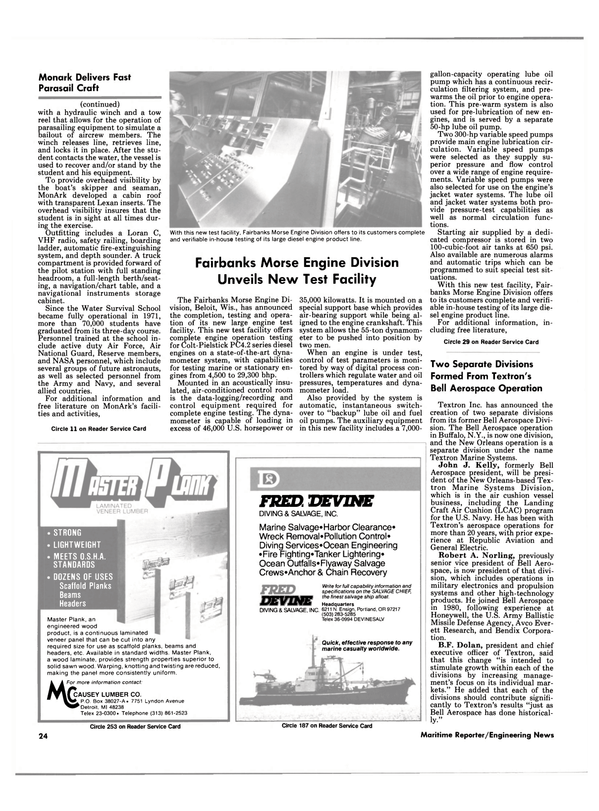