Conversion of Matson Navigation Company's RO/RO trailership Matsonia to a combination RO/RO and LO/LO container carrier is prolressing on schedule as the 236- ton keel unit of the ship's new midbody section was placed on the building ways at Todd Pacific Shipyard in San Pedro, Calif. This is the first of 59 units that will comprise a 351 Vi -foot section that will replace a 291V2 -foot midsection that will be removed from the vessel, increasing her present length of 700 feet to 760 feet. Launching of the new midbody section is scheduled for January 1987, with the ship redelivered to Matson in May to join the company's West Coast-Hawaii fleet, with cargo capacity tripled to accommodate more than 1,200 containers, plus trailers, automobiles, and bulk molasses.

During the period of midbody construction, major modifications will be occuring aboard the ship as she is afloat at the shipyard. Engine room alterations will be made to improve fuel efficiency, and a fourtier auto garage will be installed on the after deck.

After the midbody is launched, the Matsonia will be raised out of the water by Todd's Synchrolift system and hauled on rail-mounted cradles to the shoreside work platform where cutting of the hull and inserting of the new midbody will take place. The Todd rail system is ideal for this type of work because of its ability to manueuver large vessel sections laterally in and out of position.

The Matsonia will be ready for relaunching in March next year, and after two months of reactivation op- erations and sea trials will be ready to resume service. 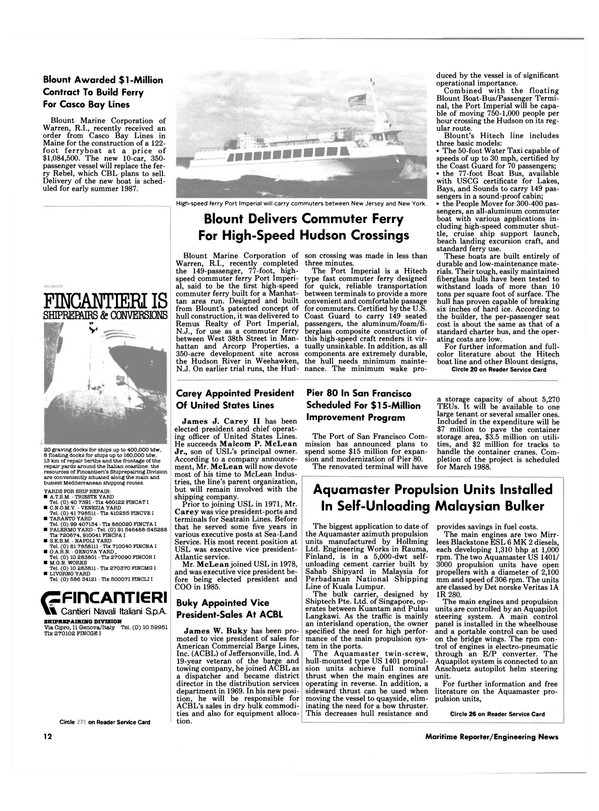