The third in a series of six fleet oilers under construction for the U.S. Navy was christened recently by the Shipyards Division of Avondale Industries, Inc. in ceremonies at the yard near New Orleans. The new ship, the John Lenthall (T-AO- 189), is named after the 19th century naval architect whose renowned services to the Navy encompassed the historic transition from sail to stream propulsion. From 1853 to 1871 he was Chief of the Navy's Bureau of Construction, and as such made significant contributions to both the practical and scientific aspects of naval architecture, most especially during the Civil War era.

The mission of the John Lenthall and other fleet oilers of her class is the transportation of bulk products from shore depots to combatants and support forces underway. These ships will also deliver limited fleet freight, cargo water, mail, and personnel.

The T-AO-189 has a cargo capacity of 183,500 barrels of oil in 18 tanks, and is capable of simultaneously receiving, storing, and discharging two separate grades of cargo fuel. All cargo pump and valve operations and the segregated ballast system are manipulated from the cargo control center located in the aft superstructure. This center has an overview of the entire underway replenishment deck.

Underway replenishment is accomplished using transfer rigs with transfer hoses suspended by a span wire that is automatically maintained in a constant-tension range.

T-AO vessels are also capable of refueling helicopters from a vertical replenishment facility aft of the accommodations house.

The six fleet oilers that Avondale is building for the Navy represent a total contract value of more than $700 million, and provide employment for approximately 2,000 Avondale workers. During the past year, Avondale launched the first two ships in the program—the Henry J.

The Lenthall and her sister ships are being built using state-of-theart modular construction techniques that include prefabricating and pre-outfitting individual modules that make up the ships. Each of the large modular units is assembled and outfitted with piping, ventilation ducts, electrical wireways, and other equipment in designated outfitting zones throughtout the ship- yard. The pre-outfitted modules are then moved to the building site and erected into complete ships. Prepackaged units of heavy machinery are assembled ashore and lifted aboard ship for installation. As a result of these modern techniques, the Lenthall and the previous fleet oilers built at Avondale were more than 80 percent complete at the time of their launching.

With 1985 sales of $1.15 billion, it is among the largest employee- owned corporations in the U.S. 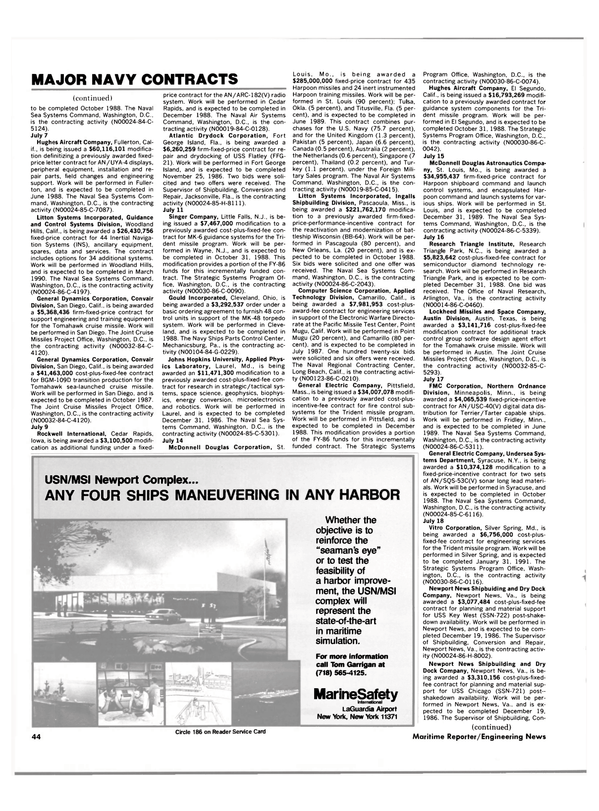