At the Papenburg, West Germany, shipyard of Meyer Werft the containership Ville D'Orient was converted into a combined sheep/cow carrier and recently delivered on schedule to the Turkish-Libyan Joint Maritime Transport Company of Istanbul, which will lease the ship from the principals, Islamic Development Bank of Jeddah, Saudi Arabia. For the owners, this conversion is the first step into the livestock carrying trade. The delivery ceremony took place in the presence of numerous guests from Saudi Arabia, Turkey, and Libya on board the vessel.

Renamed the Benwalid, the vessel has an overall length of 378.3 feet and beam of 51 feet, and was converted for worldwide trade and in compliance with the Australian Department of Trade regulations. She is capable of loading 21,300 sheep (at 110 pounds each) in 12 tiers, or 2,100 cows (at 992 pounds each) in six tiers below deck and on deck.

The ship was fitted with exchangeable aluminum deck pallets for sheep, for which Meyer Werft holds a patent. These pallets enable the ship to be re-equipped for the carriage of cows within one day. All steel decks are provided with special non-skid covering.

All the systems for the transport of cattle were developed by the shipyard itself, and improved and optimized on the basis of many years of experience. Major installations include the fodder supply system, fodder and drinking vessels of aluminum, dung removal systems, and the ventilation system. All the cow and sheep ports of the pens were made of seawater- and ammonia- resistant aluminum. For all other equipment installed, galvanized material was used.

To provide for the extra personnel required for the transport of livestock, the living quarters were expanded to accommodate 40 instead of 24 crew members. The ship was also equipped with two suitably sized new lifeboats. 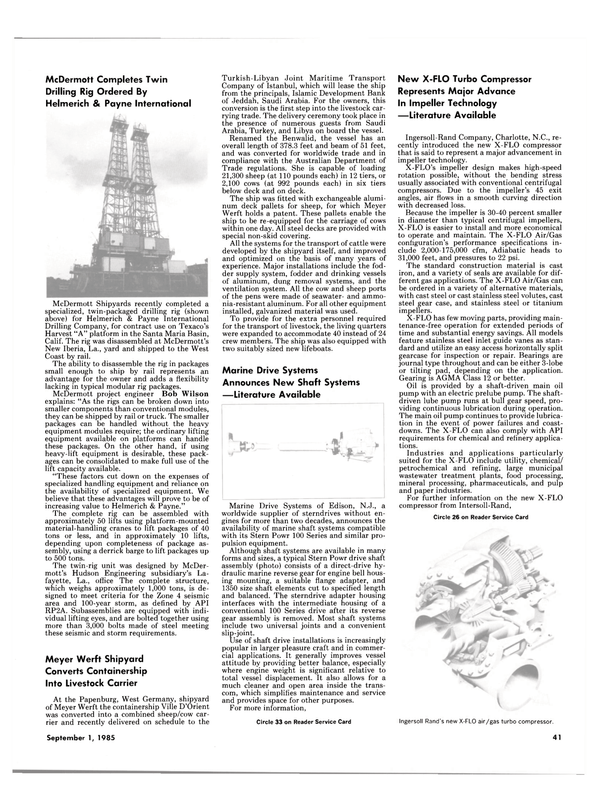