Rio de Janeiro, Brazil October 14-19, 1985 Expoship Riomar, the only international maritime exhibition in Latin America and one of four fairs organized by Seatrade, will be held this year on October 14-19 in Rio de Janeiro, Brazil. With the 1985 event moving back to its original venue at the Museum of Modern Art, in the heart of Rio's business center and only a short distance from the city's international and domestic airports, a high attendance is anticipated.

Expoship Riomar is sponsored by the Government of the State of Rio de Janeiro, Secretariat of Industry, Commerce and Tourism, and is organized by Fieras e Conferencias Internacionais Ltda., a member company of the Seatrade Group.

Co-sponsors are the National Superintendency of Merchant Marine, the Import and Export Agency of the Bank of Brasil, and ESABRAS— Associated Shipyards of Brasil/The Brazilian Oceangoing Shipowners Association. Over the years, Expoship Riomar and its associated conference have attracted exhibitors, visitors, and delegates from every area of the international maritime industry.

The scope of technological advances and the long list of products manufactured by Brazilian shipbuilding industries are displayed to a worldwide market, increasing Brazil's international reputation and placing this exhibition as a significant event in naval engineering and shipbuilding.

The associated Seatrade Riomar Conference will be held October 15- 16 in the auditorium of the Brazilian Naval War College in Rio. At the opening of the conference, an introductory address will be made by Dr.

Chairman for the first day of the conference will be Ambassador Manoel Pio Correa Jr., president of ESABRAS—Associated Shipyards of Brazil, and president of Ishikawajima do Brasil Estaleiros S/A—Ishibras.

The second day of the conference on October 16 will be chaired by Hugo Sommerkamp Bernales, president of Alamar, and president, Consorcio Naviero Peruano S/A.

Conference Agenda Tuesday, October 15 Session One will be devoted to Commodity Exports. Massive new developments such as the Carajas iron ore project and the Cerrados scheme for opening up vast areas of virgin land to agriculture will transform the pattern of raw material exports from Brazil. This session will discuss these and other major shifts in South American commodities trading, and also look at their importance in terms of ports and sea transport.

The topic for Session Two will be Finance and Shipbuilding. Against the background of current economic realities and the worldwide surplus of capacity, what are the prospects for the ship construction industries of Ibero-America? What level of domestic demand can be anticipated and what prospects exist for exporting ships? What is the attitude of governments towards an industry that remains a major industrial employer?

Wednesday, October 16 Session One will discuss Trade in Manufactured Goods. The important traffic in manufactured goods ranging from automobiles to shoes, and the viewpoint of the major shippers in the Latin American liner trades will be reflected in this session.

The implications of recent political developments such as the U.S. Shipping Act of 1984 for the South American liner trades will also be discussed.

Session Two will deal with Ibero- American Ports. The need to upgrade port facilities continuously in line with the demands of trade in South and Central America will be discussed, with emphasis on cargohandling and infrastructural development. 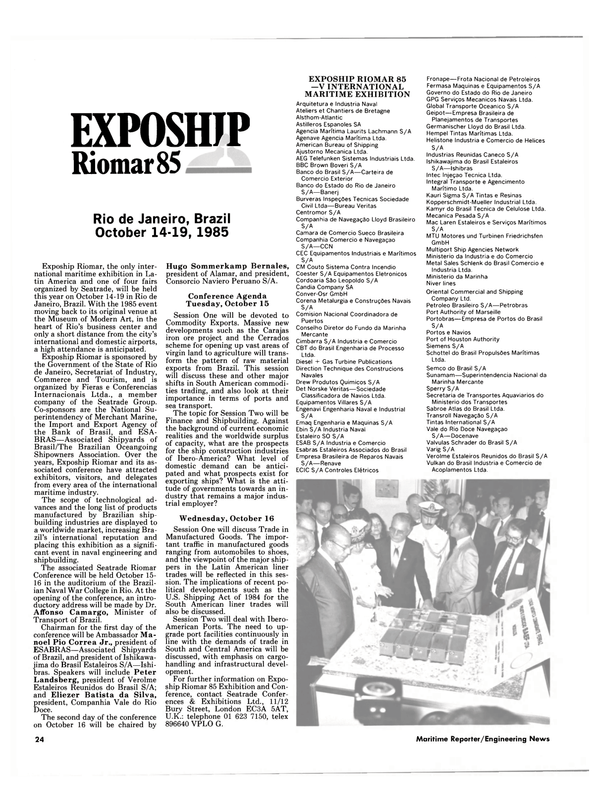