The tremendous increase in drilling and production platforms around the world has caused the petroleum industry to place new emphasis on protecting lives and equipment from the hazards of fire.

This need has caused equipment manufacturers to search for better pumps and fire monitors for optimum placement of water at platform fire locations.

In tests of the effects of pump pressures and fire nozzle shapes on water trajectories, a Worthington team compared various combinations of nozzles (with cone and parallel configurations), monitors, and pumps. A report on the result of these tests has recently been published in an issue of "Power & Fluids" (Vol. 10/No. 2) by Worthington Division, McGraw-Edison Company, of New Jersey.

The first part of the 20-page color publication is devoted to an article titled "Fire-fighting monitor research aids offshore oil field safety," by Anthony Lukes, London area sales manager of Worthington International Inc., and Victor Carrell, an engineer at Worthington- Simpson Ltd., England. The article points out that in the middle 1970s, when the petroleum industry began developing specialized craft for offshore fire-fighting duties, followed by radically different seagoing units such as the emergency support vessel (ESV) IOLAIR, built for British Petroleum, it became apparent at the preliminary design stage that there was a lack of firm and reliable data on which to base the design of fire-fighting equipment to meet their needs. For this reason, Worthington- Simpson and its associates decided to conduct tests with fullsize equipment to accurately define the state-of-the-art and to advance it if possible. These tests are said to have produced findings that promise more effective marine fire-fighting devices and may contribute to onshore technology as well.

The article, which is illustrated with photos, profile of rig layout, etc., lists the test objectives and discusses the designing of the test rig, test nozzles, pressure measurements, measuring jet trajectory, test procedure, total number of tests carried out, nozzle shapes, trajectories at different flow rates and pressures, pressure drops and velocity through the monitor, and conclusions drawn from the tests.

The last part of the "Power & Fluids" issue presents Part I of a paper by Igor Karassik, chief consulting engineer for Worthington, titled "Centrifugal pump application . . . the next milestone (VFD)." The paper discusses the advantages and benefits of variablefrequency drives (VFD), long-range developments, and conclusions.

The cover of the pamphlet features a striking photograph of the unusual vessel ESV IOLAIR, described as the world's largest fire engine, which can provide a number of emergency services for North Sea oil production platforms.

For a free copy of the above issue of "Power & Fluids" from Worthington, Circle 29 on Reader Service Card 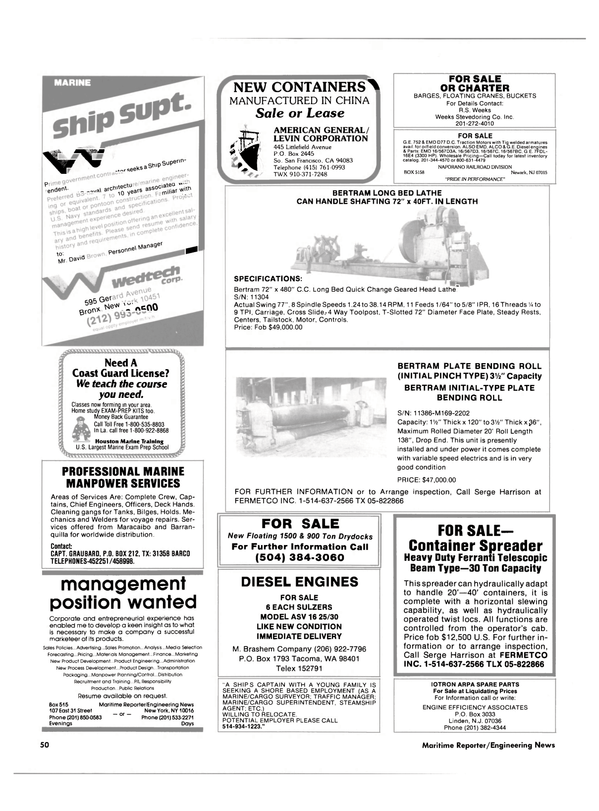