Prevention, Behavior, Control, Cleanup Los Angeles, February 25-28 Mayor Tom Bradley will welcome more than 1,200 academic, government, and industry leaders to the 1985 Oil Spill Conference in Los Angeles February 25-28. Speakers from 35 countries will explore new ways to fight oil pollution at this ninth biennial meeting, which will be held at the Westin Bonaventure Hotel. It is sponsored by the American Petroleum Institute, the Environmental Protection Agency, and the U.S. Coast Guard.

Conference delegates can choose from 110 presentations that will spotlight the latest pollution response equipment and research.

Topics scheduled include the case histories of several oil spills, new cleanup techniques and equipment, legal concerns, contingency plans for spills around the world, and a discussion of how oil affects the marine and inland environment.

A member of the Swedish Space Corporation will present a remote sensing system for maritime surveillance developed with the Swedish Coast Guard. Refinements to this technology include a scanning microwave radiometer that measures oil spill thickness. Future experiments with this system will be performed on the Space Shuttle.

Computers will take the stage when a U.S. Coast Guard speaker shows how portable computers can help salvage masters save stranded tankers, and a representative from the Institute for Water Research in West Germany discusses the computerized collection of data about more than 200 types of crude oil.

A variety of presentations will address the future use of chemical dispersants to combat oil spills. At one time dispersants were used cautiously or only in special circumstances.

Now they are getting a second chance because of increased effectiveness and reduced toxicity.

Discussions on dispersants will include their use for inland spills, comparisons between oil slicks applied with dispersants and those not, application of dispersants from boats, and the use of dispersants in southern California. One session will highlight the interagency dispersant decision process.

In-depth case histories of oil spill cleanup efforts will detail a pipeline rupture near Fresno, Calif., an oil barge discharge on the Arkansas River, the grounding and breakup of the cargo vessel Blue Magpie off the Oregon Coast, a gasoline spill from a ruptured pipeline in northern Idaho, and the removal of fuel oil spilled when an underground storage tank leaked in suburban New Castle County, Delaware.

The need for an international conference on oil spills was demon- strated by an oil well blowout six miles southeast of Santa Barbara in 1969. Tons of crude oil poured from offshore drilling Platform A, and winds drove the oil ashore, contaminating beaches, harbors, and rocky coastlines. Later that year members of the academic community, government officials, and industry leaders met at the first Oil Spill Conference in Los Angeles to share emerging technologies, innovative ideas, and test results. The Conference has been held every two years since then.

The program will feature the stateof- the-art offshore and harbor spill equipment and response systems available in southern California.

Participants will be able to observe the equipment at close hand from the deck of a comfortable Catalina ferryboat.

The Long Beach program will consist of three phases: • Execution of spill containment and removal operations at a marine terminal with boom, skimmers, vacuum truck, and response boats.

• Deployment of on-scene response equipment for exploratory drilling and production from an offshore supply boat with reeled boom, skimmers, and oil-water separator.

Also included will be a helicopter boom deployment demonstration.

The demonstration will be narrated by U.S. Coast Guard and industry representatives. The observation boat will have exhibits and information packages for all participants.

Following the Oil Spill Equipment Demonstration there will be a welcoming reception sponsored by the Conference organizers and exhibitors in the Exhibit Hall of the Bonaven^ ire Hotel from 4:30 to 6:00 pm.

This year the Conference will again feature two luncheons. On Tuesday, February 26, Kenneth Biglane of the U.S. Environmental Protection Agency, the former chairman of the National Response Team, will give the principal ad- dress. On Thursday, February 28, Dr. Reinhard Ganten will be the main speaker. Dr. Ganten, director of the International Oil Pollution Compensation Fund during the recent Diplomatic Conference to revise the 1969 Civil Liability and 1971 Fund Conventions, will comment on that Diplomatic Conference.

A Hospitality Suite for spouses and children of delegates will be open from 8:00 to 10:00 am Tuesday through Thursday in the Los Cerritos Room of the hotel. Hostesses familiar with the Los Angeles area will be on hand to offer guidance on tours and other local attractions.

Exhibits by companies, organizations, institutions, and government agencies involved in the manufacture, sale, or use of equipment and professional or technical services will be open February 25-27 in the Exhibition Hall of the Hotel, one level below the lobby. 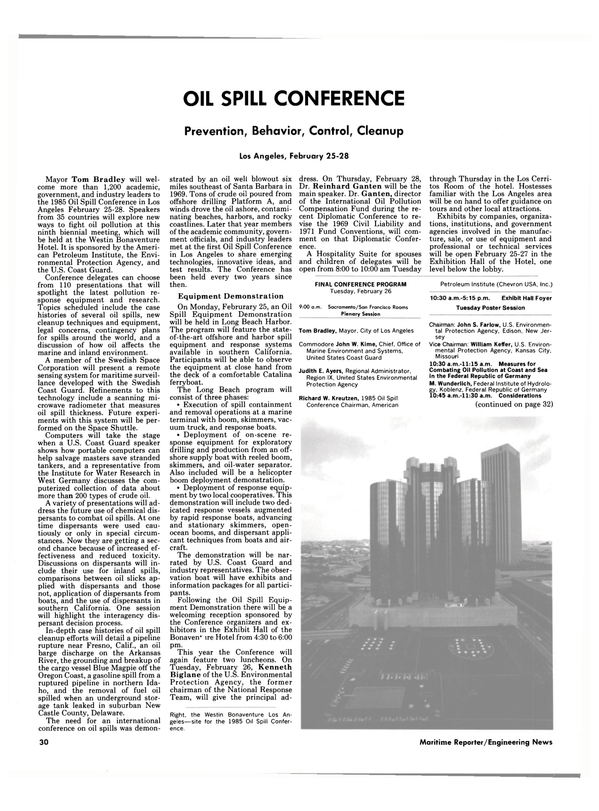