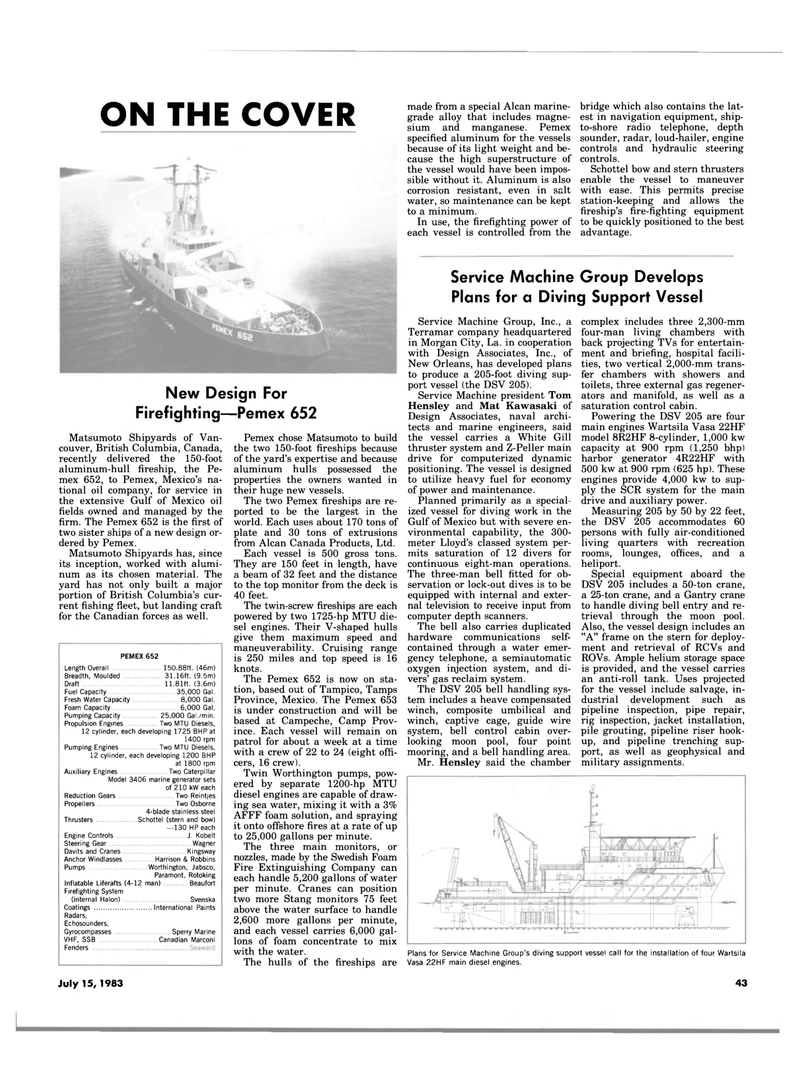 Matsumoto Shipyards of Van- couver, British Columbia, Canada, recently delivered the 150-foot aluminum-hull fireship, the Pe- mex 652, to Pemex, Mexico's na- tional oil company, for service in the extensive Gulf of Mexico oil fields owned and managed by the firm. The Pemex 652 is the first of two sister ships of a new design or- dered by Pemex.

Matsumoto Shipyards has, since its inception, worked with alumi- num as its chosen material. The yard has not only built a major portion of British Columbia's cur- rent fishing fleet, but landing craft for the Canadian forces as well.

Fenders made from a special Alcan marine- grade alloy that includes magne- sium and manganese. Pemex specified aluminum for the vessels because of its light weight and be- cause the high superstructure of the vessel would have been impos- sible without it. Aluminum is also corrosion resistant, even in salt water, so maintenance can be kept to a minimum.

In use, the firefighting power of each vessel is controlled from the bridge which also contains the lat- est in navigation equipment, ship- to-shore radio telephone, depth sounder, radar, loud-hailer, engine controls and hydraulic steering controls.

Schottel bow and stern thrusters enable the vessel to maneuver with ease. This permits precise station-keeping and allows the fireship's fire-fighting equipment to be quickly positioned to the best advantage.

Pemex chose Matsumoto to build the two 150-foot fireships because of the yard's expertise and because aluminum hulls possessed the properties the owners wanted in their huge new vessels.

The two Pemex fireships are re- ported to be the largest in the world. Each uses about 170 tons of plate and 30 tons of extrusions from Alcan Canada Products, Ltd.

Each vessel is 500 gross tons.

They are 150 feet in length, have a beam of 32 feet and the distance to the top monitor from the deck is 40 feet.

The twin-screw fireships are each powered by two 1725-hp MTU die- sel engines. Their V-shaped hulls give them maximum speed and maneuverability. Cruising range is 250 miles and top speed is 16 knots.

The Pemex 652 is now on sta- tion, based out of Tampico, Tamps

Province, Mexico. The Pemex 653 is under construction and will be based at Campeche, Camp Prov- ince. Each vessel will remain on patrol for about a week at a time with a crew of 22 to 24 (eight offi- cers, 16 crew).

AFFF foam solution, and spraying it onto offshore fires at a rate of up to 25,000 gallons per minute.

The three main monitors, or nozzles, made by the Swedish Foam

Fire Extinguishing Company can each handle 5,200 gallons of water per minute. Cranes can position two more Stang monitors 75 feet above the water surface to handle 2,600 more gallons per minute, and each vessel carries 6,000 gal- lons of foam concentrate to mix with the water.

The hulls of the fireships are

Plans for a Diving Support Vessel

Hensley and Mat Kawasaki of

Gulf of Mexico but with severe en- vironmental capability, the 300- meter Lloyd's classed system per- mits saturation of 12 divers for continuous eight-man operations.

The three-man bell fitted for ob- servation or lock-out dives is to be equipped with internal and exter- nal television to receive input from computer depth scanners.

Measuring 205 by 50 by 22 feet, the DSV 205 accommodates 60 persons with fully air-conditioned living quarters with recreation rooms, lounges, offices, and a heliport.

Special equipment aboard the

DSV 205 includes a 50-ton crane, a 25-ton crane, and a Gantry crane to handle diving bell entry and re- trieval through the moon pool.

Also, the vessel design includes an "A" frame on the stern for deploy- ment and retrieval of RCVs and