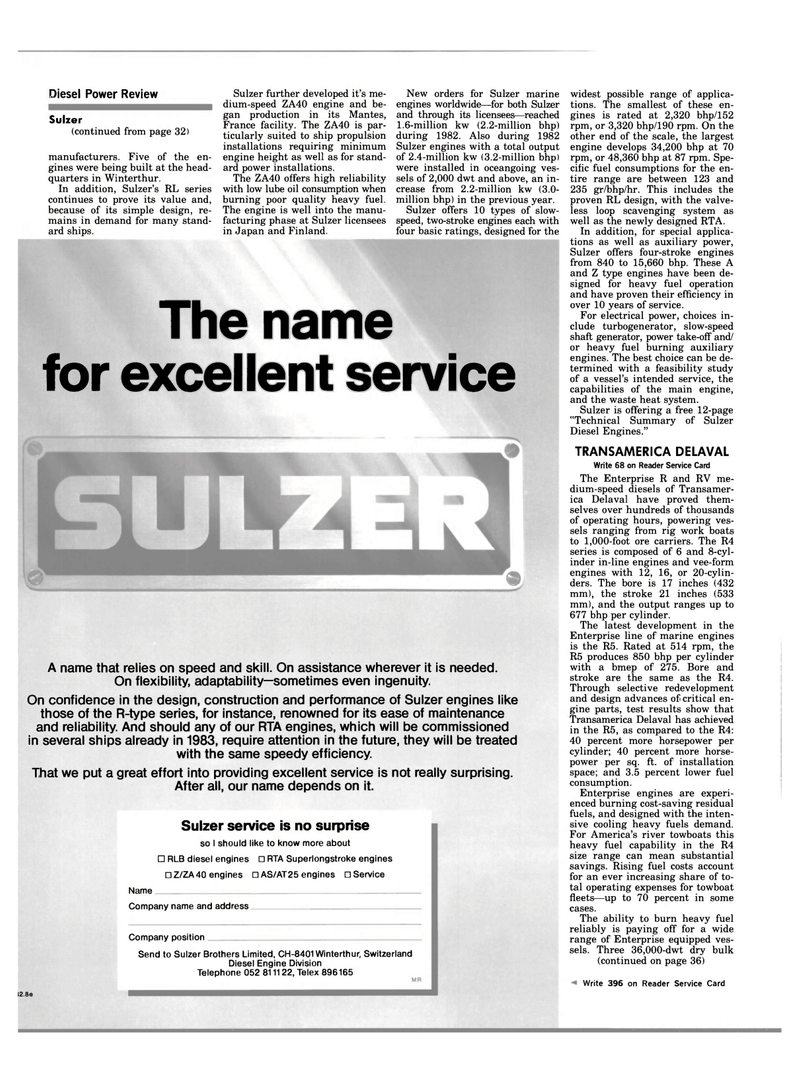 Sulzer (continued from page 32) manufacturers. Five of the en- gines were being built at the head- quarters in Winterthur.

In addition, Sulzer's RL series continues to prove its value and, because of its simple design, re- mains in demand for many stand- ard ships.

Sulzer further developed it's me- dium-speed ZA40 engine and be- gan production in its Mantes,

The engine is well into the manu- facturing phase at Sulzer licensees in Japan and Finland.

New orders for Sulzer marine engines worldwide—for both Sulzer and through its licensees—reached 1.6-million kw (2.2-million bhp) during 1982. Also during 1982

Sulzer offers 10 types of slow- speed, two-stroke engines each with four basic ratings, designed for the

The name for excellent service

A name that relies on speed and skill. On assistance wherever it is needed.

On flexibility, adaptability—sometimes even ingenuity.

On confidence in the design, construction and performance of Sulzer engines like those of the R-type series, for instance, renowned for its ease of maintenance and reliability. And should any of our RTA engines, which will be commissioned in several ships already in 1983, require attention in the future, they will be treated with the same speedy efficiency.

That we put a great effort into providing excellent service is not really surprising.

After all, our name depends on it.

In addition, for special applica- tions as well as auxiliary power,

Sulzer offers four-stroke engines from 840 to 15,660 bhp. These A and Z type engines have been de- signed for heavy fuel operation and have proven their efficiency in over 10 years of service.

For electrical power, choices in- clude turbogenerator, slow-speed shaft generator, power take-off and/ or heavy fuel burning auxiliary engines. The best choice can be de- termined with a feasibility study of a vessel's intended service, the capabilities of the main engine, and the waste heat system.

Sulzer is offering a free 12-page "Technical Summary of Sulzer

The Enterprise R and RV me- dium-speed diesels of Transamer- ica Delaval have proved them- selves over hundreds of thousands of operating hours, powering ves- sels ranging from rig work boats to 1,000-foot ore carriers. The R4 series is composed of 6 and 8-cyl- inder in-line engines and vee-form engines with 12, 16, or 20-cylin- ders. The bore is 17 inches (432 mm), the stroke 21 inches (533 mm), and the output ranges up to 677 bhp per cylinder.

The latest development in the

Enterprise line of marine engines is the R5. Rated at 514 rpm, the

For America's river towboats this heavy fuel capability in the R4 size range can mean substantial savings. Rising fuel costs account for an ever increasing share of to- tal operating expenses for towboat fleets—up to 70 percent in some cases.

The ability to burn heavy fuel reliably is paying off for a wide range of Enterprise equipped ves- sels. Three 36,000-dwt dry bulk (continued on page 36)