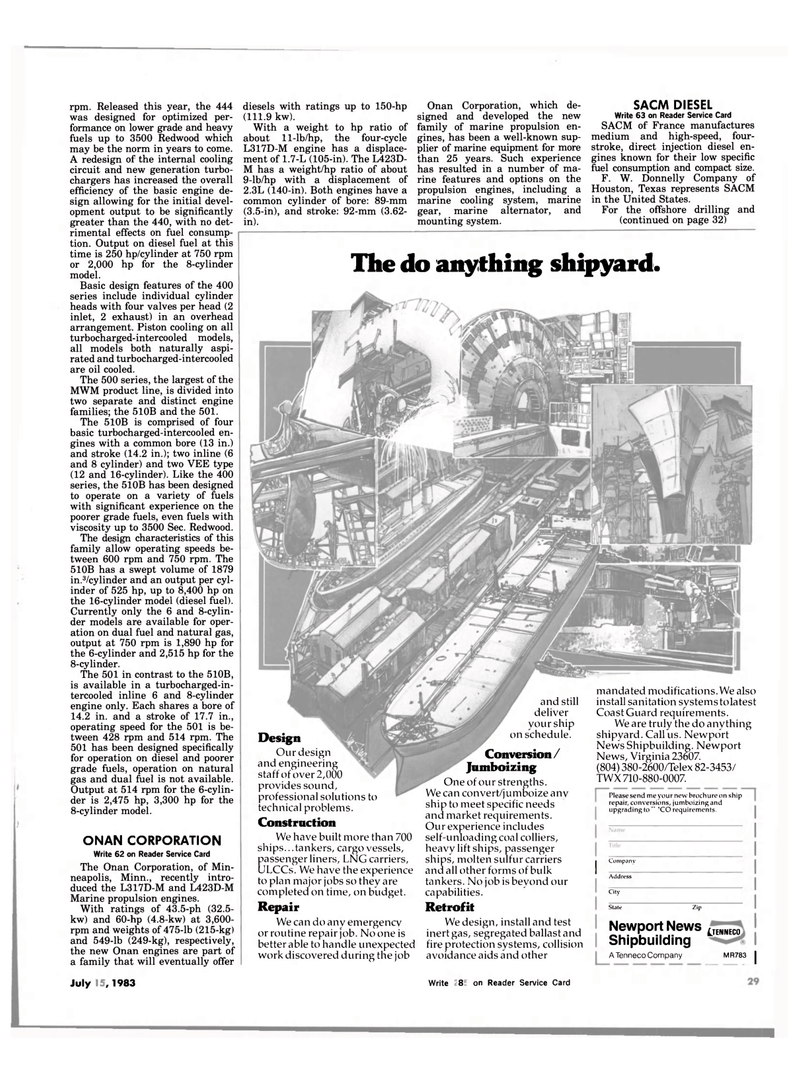 rpm. Released this year, the 444 was designed for optimized per- formance on lower grade and heavy fuels up to 3500 Redwood which may be the norm in years to come.

A redesign of the internal cooling circuit and new generation turbo- chargers has increased the overall efficiency of the basic engine de- sign allowing for the initial devel- opment output to be significantly greater than the 440, with no det- rimental effects on fuel consump- tion. Output on diesel fuel at this time is 250 hp/cylinder at 750 rpm or 2,000 hp for the 8-cylinder model.

The 500 series, the largest of the

MWM product line, is divided into two separate and distinct engine families; the 510B and the 501.

The 510B is comprised of four basic turbocharged-intercooled en- gines with a common bore (13 in.) and stroke (14.2 in.); two inline (6 and 8 cylinder) and two VEE type (12 and 16-cylinder). Like the 400 series, the 510B has been designed to operate on a variety of fuels with significant experience on the poorer grade fuels, even fuels with viscosity up to 3500 Sec. Redwood.

The 501 in contrast to the 510B, is available in a turbocharged-in- tercooled inline 6 and 8-cylinder engine only. Each shares a bore of 14.2 in. and a stroke of 17.7 in., operating speed for the 501 is be- tween 428 rpm and 514 rpm. The 501 has been designed specifically for operation on diesel and poorer grade fuels, operation on natural gas and dual fuel is not available.

With a weight to hp ratio of about 11-lb/hp, the four-cycle

Onan Corporation, which de- signed and developed the new family of marine propulsion en- gines, has been a well-known sup- plier of marine equipment for more than 25 years. Such experience has resulted in a number of ma- rine features and options on the propulsion engines, including a marine cooling system, marine gear, marine alternator, and mounting system.

For the offshore drilling and (continued on page 32)

The do anything shipyard.

We are truly the do anything shipyard. Call us. Newport

Our design and engineering staff of over 2,000 provides sound, professional solutions to technical problems.

ULCCs. We have the experience to plan major jobs so they are completed on time, on budget.

We can do any emergency or routine repair job. No one is better able to handle unexpected work discovered during the job and still deliver your ship on schedule.

One of our strengths.

We can convert/jumboize any ship to meet specific needs and market requirements.

Our experience includes self-unloading coal colliers, heavy lift ships, passenger ships, molten sulfur carriers and all other forms of bulk tankers. No job is beyond our capabilities.