Soviets Plan Nuclear Powered Merchant Ship, To Be Completed By 1984

The USSR has launched a nuclear merchant shipbuilding program which will, by the close of the 1980s, make the Soviet merchant marine the only one to have both nuclear-powered icebreakers and cargo vessels.

According to a report in the journal "Soviet Shipping," the first nuclear-powered merchant ship will be a lighter carrier with a displacement in excess of 60,000 tons and a speed of up to 20 knots—the largest dry cargo ship in the Soviet fleet.

The Soviets already have three nuclear-powered oceangoing icebreakers in operation. The new nuclear merchant ship is expected to be completed by 1984.

According to the Soviet report, the new lighter carrier will have a 40,000-hp power plant. The ship will be able to transport 73 lighters of 450 tons each, or more than 1,300 containers.

Western m a r i t i m e observers have pointed out that a number of problems have plagued the operation of Soviet nuclear-powered ships. The Soviets have admitted a number of shortcomings, including the short service life of major equipment, poor maintainability, and imperfect compartment designs for radioactive decontamination.

But the Soviet Merchant Marine Ministry has said categorically that during the past 20 years "there has not been a single radiation accident onboard Soviet nuclear icebreakers dangerous to the crew or the environment." Nevertheless, the Soviets have disclosed that after six navigation seasons, the plant onboard the first nuclear icebreaker, the Lenin, was replaced by an improved version.

The Soviets assert that the oceangoing n u c l e a r icebreakers have an "unlimited sailing range, and an endurance of between 500- 700 days." By comparison, they said, the endurance of Western icebreakers does not exceed 50 days.

The Soviets complained that "not much information" has appeared in the West about Soviet nuclear-powered icebreakers.

Under present building plans, another giant icebreaker already is under construction. The Rossiya, when completed, possibly by 1983-84, will be the fourth such icebreaker in the Soviet fleet. The others are the Lenin, Arktika and the Sibir.

The Soviet report said that previously launched atomic-powered merchant ships in the West and Japan were unsatisfactory. It claimed that these vessels had "not lived up to expectations . . ." It remains to be seen, noted Western maritime observers, how other countries will react to having nuclear-powered cargo ships trading in their ports.

The Russian report said the technology used in building the new nuclear-powered lighter carrier is "quite suitable and efficient f o r northern trade." It added that "the strengthened hull and the mighty power plant will enable the lighter carrier to force ice fields." The USSR Merchant Marine Ministry said recently concerning merchant ships used in Arctic conditions that, "the growth of Arctic shipments demanded by growth of the national economy, has called f o r a new effort to create a new dependable transportation system." The ministry said the operation of oceangoing n u c l e a r v e s s e ls "has proven the efficiency of their reactors and the feasibility of such plants in other super icebreakers and transport ships." 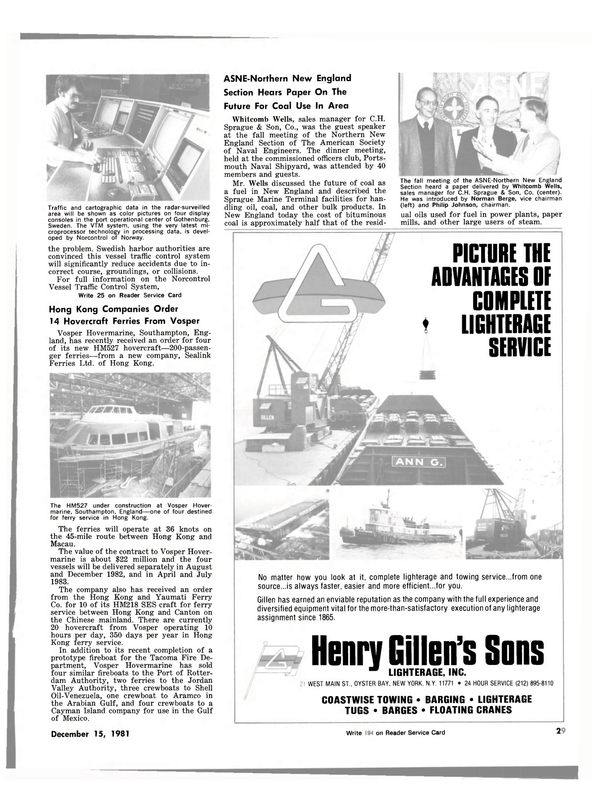