A Report On The 89th Annual Meeting A series of extremely interesting technical papers, a banquet, dinner-dance, and the presenting of traditional awards were the hallmarks of the 89th annual meeting of The Society of Naval Architects and Marine Engineers held in the New York Hilton Hotel on November 18, 19, and 20, 1981.

In the order given, the Blakely Smith Medal " f o r outstanding accomplishment in ocean engineer- ing" was presented to Ben C.

Gerwick Jr., professor of civil engineering at the University of California, Berkeley. The Vice Admiral "Jerry" Land Medal " f or outstanding accomplishment in the marine field" went to Ellsworth L. Peterson, president of Peterson Builders, Inc., Sturgeon Bay, Wis., and the David W. Taylor Medal "for notable achievement in marine engineering" was awarded to Erwin Carl Rohde, who was manager-technical resources operation of the industrial and marine steam turbine division of the General Electric Company before his retirement in August 1981.

Professor Gerwick is one of a very small number of practitioners specializing in the construction of marine structures in prestressed concrete. His 40 years of international activity have involved him with major responsibilities for numerous marine terminals, well-known bridges and more recently, the Arctic Ocean Terminal at Prudhoe Bay, Alaska.

Professor Gerwick is a graduate of the University of California at Berkeley.

Mr. Peterson, recipient of the Land Medal, is an active Society member, giving freely of his time and resources as chairman of the Ship Production Committee, which administers this year a projected $4.5 million in shipbuilding research funds. The company of which he is president, has expanded greatly under his d i r e c t i o n , and today Peterson Builders, Inc. is a successful builder of many types of small to medium-size vessels, out of a wide range of structural materials.

Mr. Rohde, recipient of the David W. Taylor Medal, spent almost 40 years in the industrial and marine steam turbine division of General Electric in Lynn, Mass., and was responsible for outstanding contributions to the advancement of steam turMne design for application to marine propulsion. He has been intimately involved in the development of main and auxiliary machinery for ships of every class and description, both naval and merchant. Mr. Rohde is a graduate of the University of Michigan.

SPEAKER The main address at the dinner was given by Navy Secretary John Lehman, who called for "greater degree of harmony and mutual agreement between industry, labor, the administration, and Congress, among the separate agencies of the government possessing maritime responsibilities, and between the shipowners and shipbuilders." He not only suggested that SNAME was in an "excellent position to be a leader in this movement," but also urged them to look abroad to "learn novel shipbuilding t e c h n i q u e s " because "there is much we can learn" and because "we can no longer assume assume that we're the best or first in this important global industry." If a strong U.S. merchant fleet isn't developed it threatens to become not the "fourth arm of defense," but a "strategic missing link," he said.

The administration was aware of the "great difficulty" facing shipbuilders now and "we are doing our best to help. In the final analysis, though, we are all ultimately responsible for our own survival, and it is for this reason that I commend the efforts of the industry to form a coalition, and to devise a strategy for success." The 1970s, he added, was a decade of ominous naval and maritime trends. This current decade may well be our final chance—the last call for U.S. maritime superiority.

Apart from a general description of the administration's plans f o r a 600-ship fleet by the decade's end, Mr. Lehman didn't mention any specifics due from or being undertaken in Washington.

At the President's Luncheon, held on November 19, the following awards were presented.

The Captain Joseph H. Linnard Prize for 1981 was presented to Helge Johannessen and Knut T.

Skarr f o r their paper "Guidelines f o r the Prevention of Excessive Ship Vibration." This prize is given to the author or authors of the best paper contributed to the "Transactions" of the Society at its annual meeting the preceding year.

The Vice Admiral E.L. Cochrane Award for 1981, which is f o r the best paper delivered before a Section of the Society, was presented to Roy Harrington for his paper, "Rudder Torque Prediction," delivered at the Hampton Roads Section on January 28, 1981.

The G r a d u a t e P a p e r Honor Prize for 1981 was awarded to Ygal Shapir of Israel and Gregorv J. White of Berkeley, Calif., for their paper, "An Analysis of the Ultimate Strength of Deck Structures Under Inplane Loads," delivered before the Northern California Section on April 9, 1981.

McGettigan for their paper, "An Experimental Analysis of the Effects of Pitch Gyradius on Ship Motions in Head Seas," delivered at the Chesapeake Section on April 14, 1981.

The Graduate Paper Award for 1981 was given to Rodney D.

Peltzer f o r his paper, "The Effect of Upstream Shear and Surface Roughness on the Vortex Shedding Patterns and Pressure Distributions Around a Circular Cylinder in Transitional Re Flows," delivered at the Chesapeake Section on May 20, 1980.

Certificates of a p p r e c i a t i on were awarded to Andrew A. Szypula for his outstanding service as technical chairman of three symposia on propellers, and to Howard B. Little, the Society's accountant and auditor for the past 44 years. At the President's Luncheon, Golden Award 50-year M e m b e r s h i p Certificates were presented to: James C. Clarke, John Beattie Muir, James A. Pennypacker, Maurice L. Sellers, Ivar D. Soelberg, Leopold E. Starr, John L. Stevens Jr., and G. Gilbert Wvland.

The highly acclaimed technical program was put together by the Papers Committee and was chaired by Jack Obermeyer. The papers were prepared by persons f r om Australia, China, England, Japan, Netherlands, and the U.S., representing industry, research institutes and organizations, naval architectural firms, and the U.S. Navy.

Two of the papers were the result of cross-Atlantic and cross- Pacific cooperation. "Hydrodynamic Added-Mass Matrix of Vibrating Ship Based on a Distribution of Hull Surface Sources" was authored by William S. Corus of the University of Michigan and Schelte Hylarides of the Netherlands Ship Model Basin. A paper entitled "Applications of a Computer-Aided, Optimal Preliminary Ship Structural Design Method" was written by Donald Liu and John Mahowald of the American Bureau of Shipping, and Owen Hughes of the University of New South Wales, Australia.

In his address to the Society, SNAME president John J.

Nachtsheim challenged the members to examine if they were "doing enough" in their involvement with the organization's affairs in light of what he viewed was a time of growth. 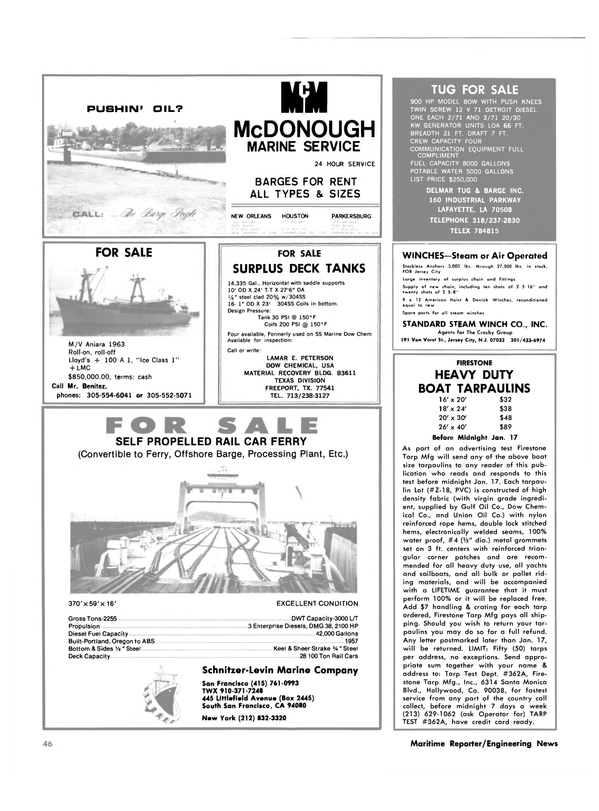