The rig was christened J Storm XVI by its sponsor Mrs. Jack K.

The multimillion-dollar rig has been under construction for nearly 10 months and, upon delivery, will begin drilling operations in the Gulf of Mexico for Mesa Petroleum Company.

James C. Storm has been a long-time customer of Bethlehem Steel Corporation's shipyard at Beaumont.

Sherman C. Perry, general manager of the shipyard, said this commissioning marks a significant milestone in the history of the shipyard. It extends to 50 the number of jackup drilling units commissioned by the Beaumont yard since it built the first 100- foot water depth jackup in 1954.

The commissioning also marks the fifth rig to be delivered this year by the yard, as well as the 87th offshore rig delivered by Bethlehem yards.

The J Storm XVI is a mat-supported jackup designed for deepwell drilling operations. On location, the rig will have a total variable drilling load capacity of 4.5 million pounds and handle hook or rotary, plus setback loads of 950,000 pounds.

The rig consists of a platform measuring 176 feet by 109 feet supported by three 12-foot-diameter columns fixed to a mat that is 210 feet by 170 feet. Outfitted with deepwell drilling equipment, the rig can operate in waters of up to 250 feet while experiencing forces resulting from 70-knot winds and 35-foot-high waves. The J Storm XVI contains onboard, air-conditioned living accommodations for 48 persons.

This marks the 18th time that one of the 50 Beaumont rigs was commissioned for the James C.

The J Storm XVI is No. 18, and the J Storm XVII No. 19 is scheduled for commissioning and delivery later this year.

Mr. Storm's dealings with the yard follow a direct line back to 1949. Then in November 1954, the Beaumont yard delivered the Mr.

Gus, the first mobile drilling platform capable of operating in 100 feet of water.

Mr. Gus was built for the C.G.

Storm became a partner in that company shortly after he joined it at the close of World War II. In 1957, the Beaumont yard delivered Mr. Gus II, the prototype of the mat-supported jackup rigs built at the yard today. It was the first mobile drilling unit that could drill in up to 150 feet of water.

Mr. Storm was involved with that rig also. And Mr. Gus II, after 24 years of service, is still drilling for oil and natural gas.

After the Glasscock interests disposed of their drilling rigs, Mr.

Mr. Storm then formed Marine Drilling Company and ordered J Storm I from the Beaumont shipyard.

J Storm I was initially ordered with capability to operate in 225 feet of water. Mr. Storm asked if the columns could be strengthened and lengthened. The yard added 25 feet of capability, and the rig became the prototype for B e t h l e h e m ' s series of 250-foot jackup rigs.

He also ordered the first jackup drilling unit capable of working in up to 375 feet of water. The yard designed this platform to utilize telescoping legs so it would be manageable under tow to different locations, yet be able to work in deeper waters. This rig, J Storm VII, was delivered in 1976.

Mr. Perry, general manager of the yard since June 1, 1978, reported that Beaumont has work for the next 1H years. "We have orders for 12 offshore mobile drilling units, which will take us into 1983, and negotiations are being conducted for additional contracts." The general manager said that the yard has delivered four jackup drilling units thus far this year, and anticipates delivery of four or possibly five more by the end of the year.

That would match or nearly match 1980, when nine drilling units were delivered. For 1978 and 1979, the yard delivered five units each year.

The yard presently has more than 2,300 employees at work on the drilling units with two shifts generally being worked, and can accommodate six units under construction simultaneously.

The shipyard's principal products are offshore mobile drilling units, primarily jackups, and oil and gas production and storage facilities for offshore service. The Beaumont yard has built many ships and barges, principally for the petroleum industry, and can handle any repair, reconditioning, conversion or jumboizing of ships.

It has a floating drydock with lifting capacity of 17,500 tons and extreme length of 648 feet. Its mobile floating crane has a capacity of 500 tons. 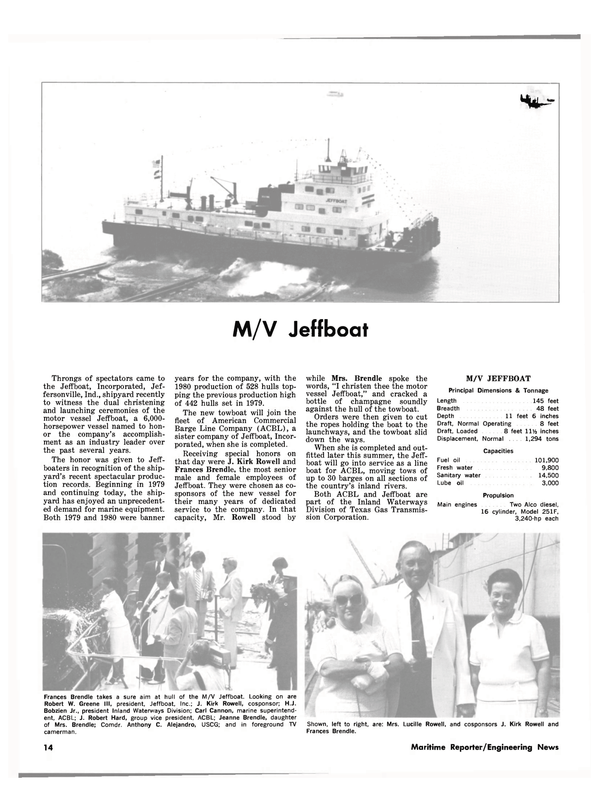