Ogden Marine, Inc., an Ogden Corporation subsidiary, has announced that one of the two new tankers to be built at Ogden's Avondale Shipyards, Inc. has been chartered on a long-term basis to Diamond Shamrock Corporation of Cleveland, Ohio, to transport chemical cargoes between U.S.

Gulf and East or West Coast ports, including Puerto Rico.

The 42,000-ton vessel is expected to be delivered in the fourth quarter of 1980 and will meet all present or anticipated U.S. Coast Guard and IMCO regulations.

"We expect to build a series of these modern tankers to serve as replacements for existing overage U.S.-flag coastwise ships, of which one-third were built during World War II," said Michael Klebanoff, president of Ogden Marine, Inc.

The new tankers will meet all present and anticipated international and U.S. safety and environmental requirements. They will have individual pumps in each cargo tank, and will be able to handle more than 10 different types of cargo at one time. The vessels' efficient and modern hull configuration—640-foot length and 105y2-foot beam—allows entry into most U.S. ports and efficient service through the Panama Canal.

"This vessel will double Diamond Shamrock's current ocean transportation capabilities, and fulfills a need for replacement of a portion of overage U.S.-flag 'Jones Act' chemical ships," said James S. Paterson, director of transportation and distribution for Diamond Shamrock. He said, "All cargoes to be carried will be solicited from chemical and petroleum companies through a concentrated marketing program." Mr. Paterson further stated the decision to time charter a second vessel was based in part on the successful operation of the Seabulk Magnachem. This unit, a 40,000-ton chemical integratedtug- barge operated by Hvide Shipping, Inc. of Ft. Lauderdale, Fla., was built in 1977 and trades between U.S. Gulf and Atlantic Coast ports, carrying chemicals and petroleum products produced by Diamond Shamrock as well as outside charterers.

The new vessel will complement the present service of the Magnachem by offering Diamond Shamrock and other charterers additional reliability and increased flexibility in scheduling shipments.

Mr. Paterson said that both the Seabulk Magnachem and the new vessel will be available for spot or period charters, and all interested parties should contact D. 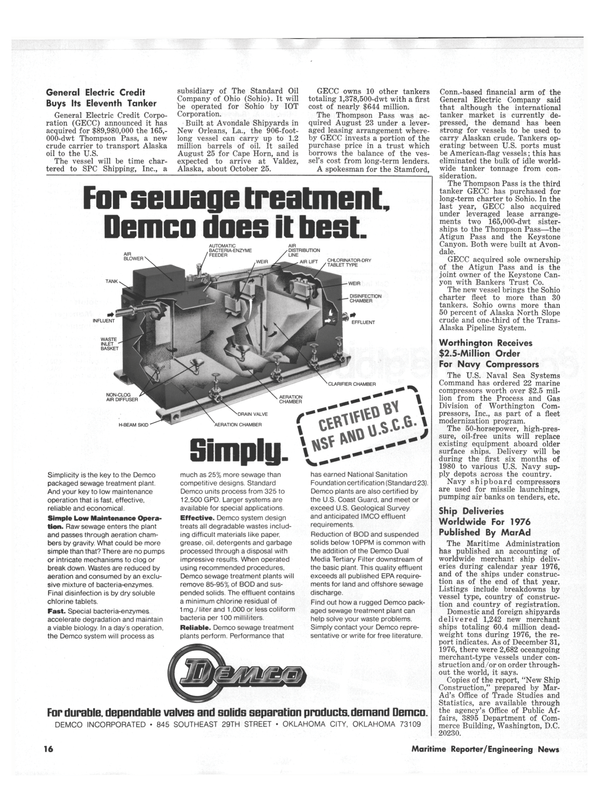