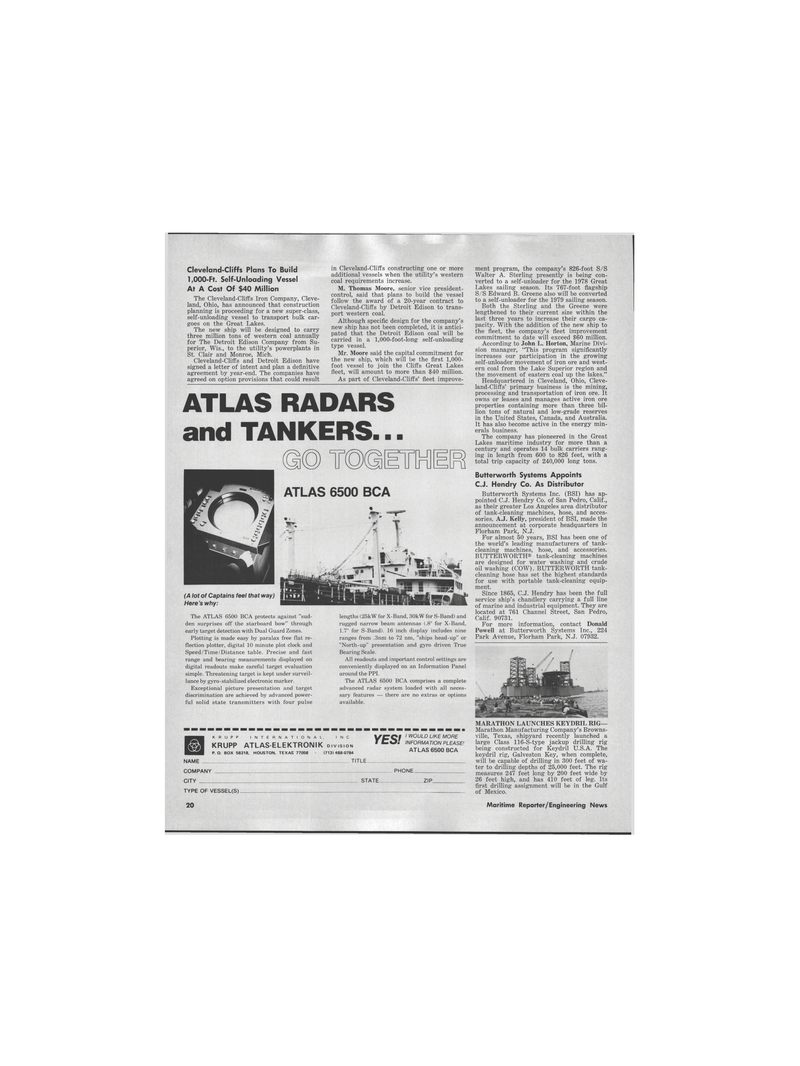 The Cleveland-Cliffs Iron Company, Cleve- land, Ohio, has announced that construction planning is proceeding for a new super-class, self-unloading vessel to transport bulk car- goes on the Great Lakes.

The new ship will be designed to carry three million tons of western coal annually for The Detroit Edison Company from Su- perior, Wis., to the utility's powerplants in

Cleveland-Cliffs and Detroit Edison have signed a letter of intent and plan a definitive agreement by year-end. The companies have agreed on option provisions that could result in Cleveland-Cliffs constructing one or more additional vessels when the utility's western coal requirements increase.

M. Thomas Moore, senior vice president- control, said that plans to build the vessel follow the award of a 20-year contract to

Although specific design for the company's new ship has not been completed, it is antici- pated that the Detroit Edison coal will be carried in a 1,000-foot-long self-unloading type vessel.

Mr. Moore said the capital commitment for the new ship, which will be the first 1,000- foot vessel to join the Cliffs Great Lakes fleet, will amount to more than $40 million.

As part of Cleveland-Cliffs' fleet improve-

The ATLAS 6500 BCA protects against "sud- den surprises off the starboard bow" through early target detection with Dual Guard Zones.

Plotting is made easy by paralax free flat re- flection plotter, digital 10 minute plot clock and

All readouts and important control settings are conveniently displayed on an Information Panel around the PPI.

The ATLAS 6500 BCA comprises a complete advanced radar system loaded with all neces- sary features — there are no extras or options available.

Walter A. Sterling presently is being con- verted to a self-unloader for the 1978 Great

S/S Edward B. Greene also will be converted to a self-unloader for the 1979 sailing season.

Both the Sterling and the Greene were lengthened to their current size within the last three years to increase their cargo ca- pacity. With the addition of the new ship to the fleet, the company's fleet improvement commitment to date will exceed $60 million.

According to John L. Horton, Marine Divi- sion manager, "This program significantly increases our participation in the growing self-unloader movement of iron ore and west- ern coal from the Lake Superior region and the movement of eastern coal up the lakes."

Headquartered in Cleveland, Ohio, Cleve- land-Cliffs' primary business is the mining, processing and transportation of iron ore. It owns or leases and manages active iron ore properties containing more than three bil- lion tons of natural and low-grade reserves in the United States, Canada, and Australia.

It has also become active in the energy min- erals business.

The company has pioneered in the Great

Lakes maritime industry for more than a century and operates 14 bulk carriers rang- ing in length from 600 to 826 feet, with a total trip capacity of 240,000 long tons.

For almost 50 years, BSI has been one of the world's leading manufacturers of tank- cleaning machines, hose, and accessories.

Since 1865, C.J. Hendry has been the full service ship's chandlery carrying a full line of marine and industrial equipment. They are located at 761 Channel Street, San Pedro,

Marathon Manufacturing Company's Browns- ville, Texas, shipyard recently launched a large Class 116-S-type jackup drilling rig being constructed for Keydril U.S.A. The keydril rig, Galveston Key, when complete, will be capable of drilling in 300 feet of wa- ter to drilling depths of 25,000 feet. The rig measures 247 feet long by 200 feet wide by 26 feet high, and has 410 feet of leg. Its first drilling assignment will be in the Gulf of Mexico.