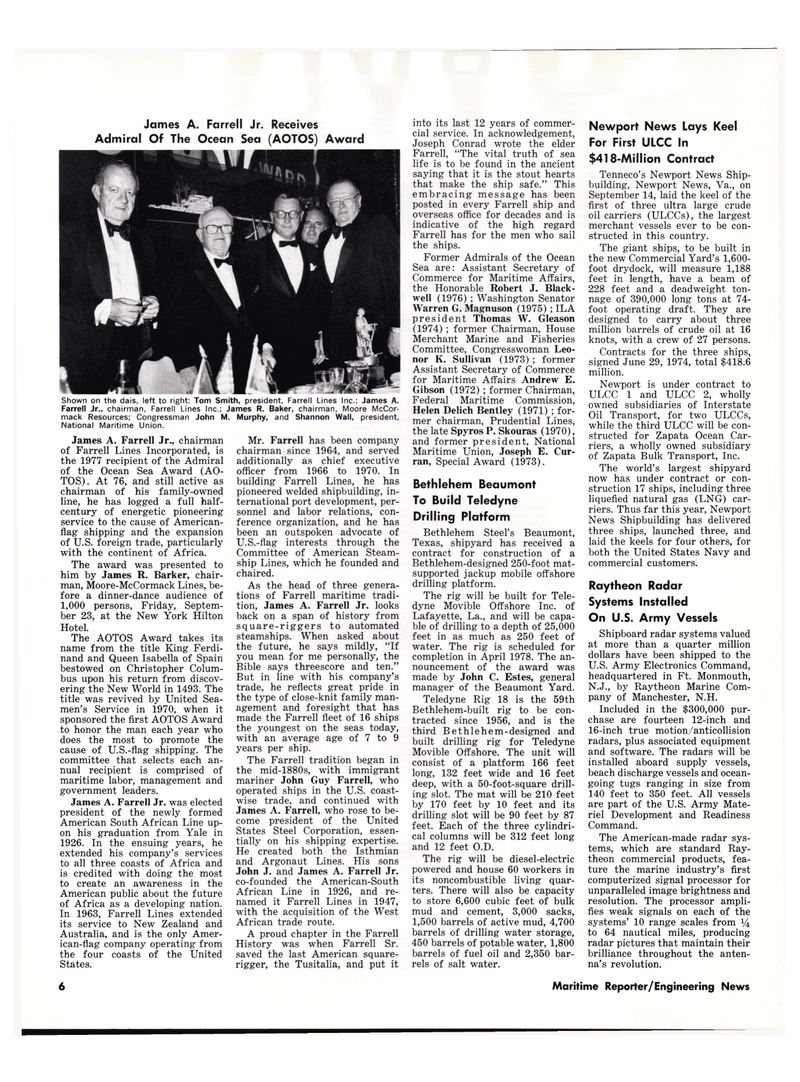 James A. Farrell Jr., chairman of Farrell Lines Incorporated, is the 1977 recipient of the Admiral of the Ocean Sea Award (AO-

TOS). At 76, and still active as chairman of his family-owned line, he has logged a full half- century of energetic pioneering service to the cause of American- flag shipping and the expansion of U.S. foreign trade, particularly with the continent of Africa.

The award was presented to him by James R. Barker, chair- man, Moore-McCormack Lines, be- fore a dinner-dance audience of 1,000 persons, Friday, Septem- ber 23, at the New York Hilton

The AOTOS Award takes its name from the title King Ferdi- nand and Queen Isabella of Spain bestowed on Christopher Colum- bus upon his return from discov- ering the New World in 1493. The title was revived by United Sea- men's Service in 1970, when it sponsored the first AOTOS Award to honor the man each year who does the most to promote the cause of U.S.-flag shipping. The committee that selects each an- nual recipient is comprised of maritime labor, management and government leaders.

James A. Farrell Jr. was elected president of the newly formed

American South African Line up- on his graduation from Yale in 1926. In the ensuing years, he extended his company's services to all three coasts of Africa and is credited with doing the most to create an awareness in the

American public about the future of Africa as a developing nation.

In 1963, Farrell Lines extended its service to New Zealand and

Australia, and is the only Amer- ican-flag company operating from the four coasts of the United

Mr. Farrell has been company chairman since 1964, and served additionally as chief executive officer from 1966 to 1970. In building Farrell Lines, he has pioneered welded shipbuilding, in- ternational port development, per- sonnel and labor relations, con- ference organization, and he has been an outspoken advocate of

U.S.-flag interests through the

Committee of American Steam- ship Lines, which he founded and chaired.

As the head of three genera- tions of Farrell maritime tradi- tion, James A. Farrell Jr. looks back on a span of history from square-riggers to automated steamships. When asked about the future, he says mildly, "If you mean for me personally, the

But in line with his company's trade, he reflects great pride in the type of close-knit family man- agement and foresight that has made the Farrell fleet of 16 ships the youngest on the seas today, with an average age of 7 to 9 years per ship.

The Farrell tradition began in the mid-1880s, with immigrant mariner John Guy Farrell, who operated ships in the U.S. coast- wise trade, and continued with

James A. Farrell, who rose to be- come president of the United

He created both the Isthmian and Argonaut Lines. His sons

John J. and James A. Farrell Jr. co-founded the American-South

African Line in 1926, and re- named it Farrell Lines in 1947, with the acquisition of the West

A proud chapter in the Farrell

History was when Farrell Sr. saved the last American square- rigger, the Tusitalia, and put it into its last 12 years of commer- cial service. In acknowledgement,

Farrell, "The vital truth of sea life is to be found in the ancient saying that it is the stout hearts that make the ship safe." This embracing message has been posted in every Farrell ship and overseas office for decades and is indicative of the high regard

Farrell has for the men who sail the ships.

Former Admirals of the Ocean

Sea are: Assistant Secretary of

Texas, shipyard has received a contract for construction of a

The rig will be built for Tele- dyne Movible Offshore Inc. of

Lafayette, La., and will be capa- ble of drilling to a depth of 25,000 feet in as much as 250 feet of water. The rig is scheduled for completion in April 1978. The an- nouncement of the award was made by John C. Estes, general manager of the Beaumont Yard.

Bethlehem-built rig to be con- tracted since 1956, and is the third Bethlehem-designed and built drilling rig for Teledyne

The rig will be diesel-electric powered and house 60 workers in its noncombustible living quar- ters. There will also be capacity to store 6,600 cubic feet of bulk mud and cement, 3,000 sacks, 1,500 barrels of active mud, 4,700 barrels of drilling water storage, 450 barrels of potable water, 1,800 barrels of fuel oil and 2,350 bar- rels of salt water.

For First ULCC In $418-Million Contract

September 14, laid the keel of the first of three ultra large crude oil carriers (ULCCs), the largest merchant vessels ever to be con- structed in this country.

The giant ships, to be built in the new Commercial Yard's 1,600- foot drydock, will measure 1,188 feet in length, have a beam of 228 feet and a deadweight ton- nage of 390,000 long tons at 74- foot operating draft. They are designed to carry about three million barrels of crude oil at 16 knots, with a crew of 27 persons.

Newport is under contract to

News Shipbuilding has delivered three ships, launched three, and laid the keels for four others, for both the United States Navy and commercial customers.

Included in the $300,000 pur- chase are fourteen 12-inch and 16-inch true motion/anticollision radars, plus associated equipment and software. The radars will be installed aboard supply vessels, beach discharge vessels and ocean- going tugs ranging in size from 140 feet to 350 feet. All vessels are part of the U.S. Army Mate- riel Development and Readiness