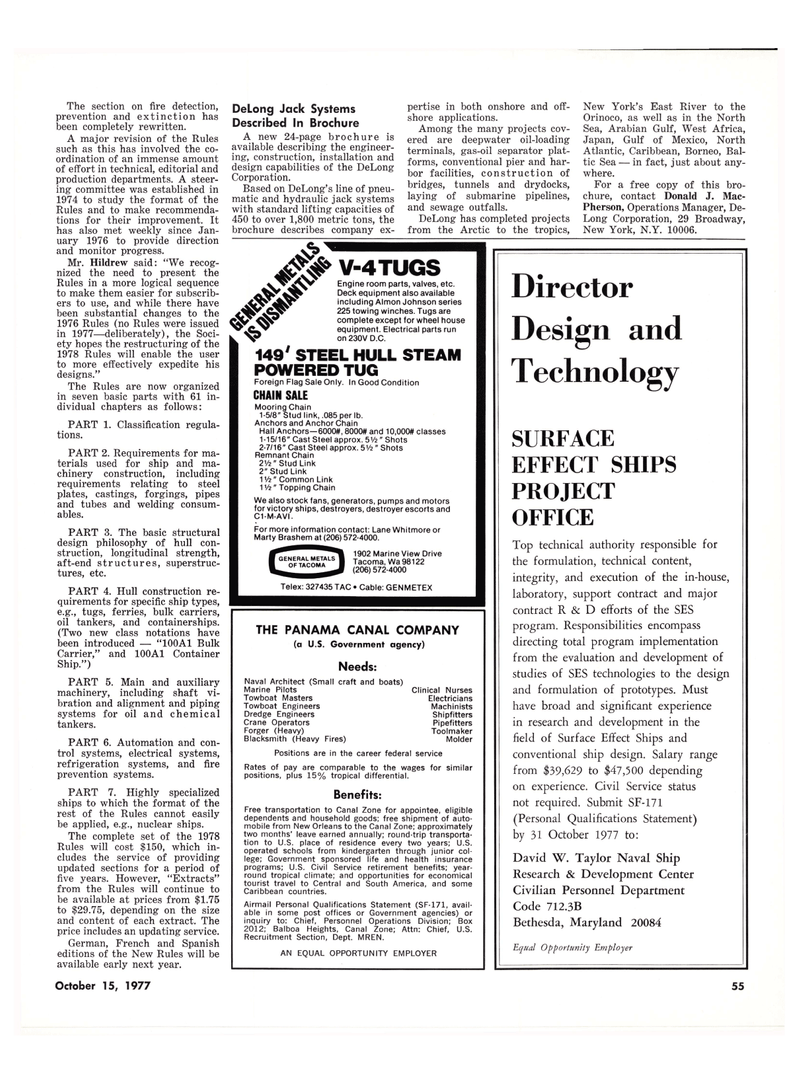 The section on fire detection, prevention and extinction has been completely rewritten.

A major revision of the Rules such as this has involved the co- ordination of an immense amount of effort in technical, editorial and production departments. A steer- ing committee was established in 1974 to study the format of the

Rules and to make recommenda- tions for their improvement. It has also met weekly since Jan- uary 1976 to provide direction and monitor progress.

Mr. Hildrew said: "We recog- nized the need to present the

Rules in a more logical sequence to make them easier for subscrib- ers to use, and while there have been substantial changes to the 1976 Rules (no Rules were issued in 1977—deliberately), the Soci- ety hopes the restructuring of the 1978 Rules will enable the user to more effectively expedite his designs."

The Rules are now organized in seven basic parts with 61 in- dividual chapters as follows:

PART 5. Main and auxiliary machinery, including shaft vi- bration and alignment and piping systems for oil and chemical tankers.

PART 7. Highly specialized ships to which the format of the rest of the Rules cannot easily be applied, e.g., nuclear ships.

Rules will cost $150, which in- cludes the service of providing updated sections for a period of five years. However, "Extracts" from the Rules will continue to be available at prices from $1.75 to $29.75, depending on the size and content of each extract. The price includes an updating service.

German, French and Spanish editions of the New Rules will be available early next year.

A new 24-page brochure is available describing the engineer- ing, construction, installation and design capabilities of the DeLong

Based on DeLong's line of pneu- matic and hydraulic jack systems with standard lifting capacities of 450 to over 1,800 metric tons, the brochure describes company ex- pertise in both onshore and off- shore applications.

DeLong has completed projects from the Arctic to the tropics,

New York's East River to the

Orinoco, as well as in the North

Atlantic, Caribbean, Borneo, Bal- tic Sea — in fact, just about any- where.

For a free copy of this bro- chure, contact Donald J. Mac-

Positions are in the career federal service

Rates of pay are comparable to the wages for similar positions, plus 15% tropical differential.

Top technical authority responsible for the formulation, technical content, integrity, and execution of the in-house, laboratory, support contract and major contract R&D efforts of the SES program. Responsibilities encompass directing total program implementation from the evaluation and development of studies of SES technologies to the design and formulation of prototypes. Must have broad and significant experience in research and development in the field of Surface Effect Ships and conventional ship design. Salary range from $39,629 to $47,500 depending on experience. Civil Service status not required. Submit SF-171 (Personal Qualifications Statement) by 31 October 1977 to: