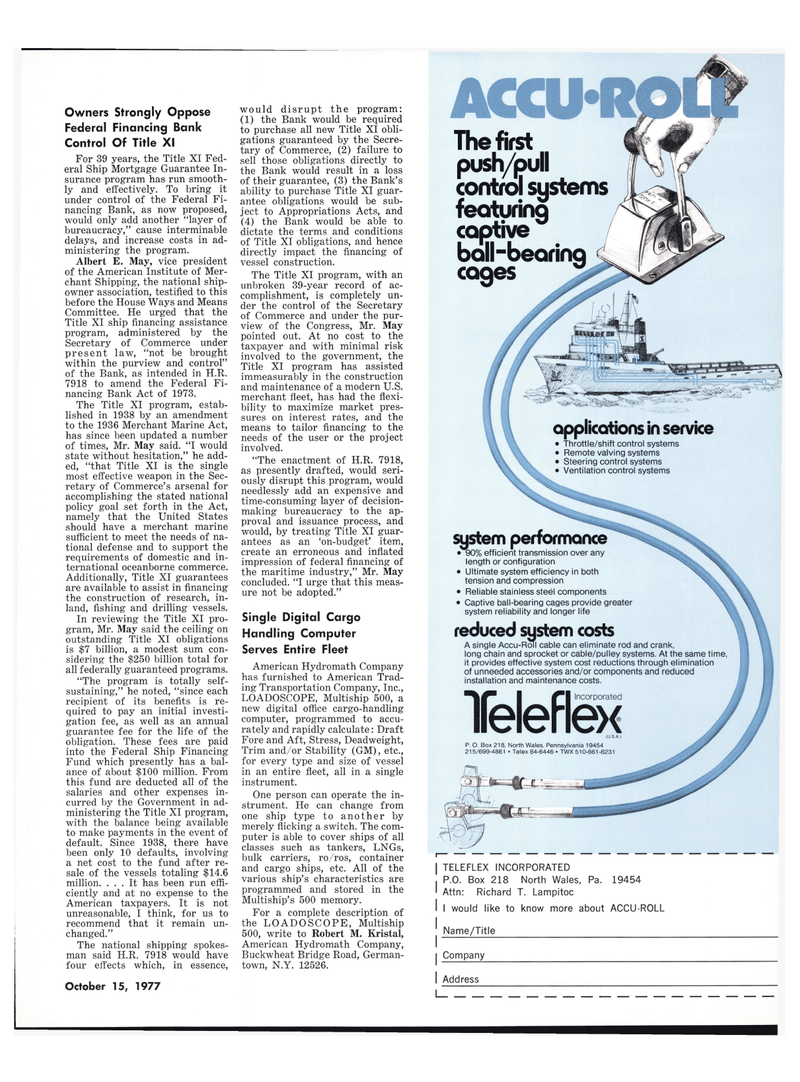 For 39 years, the Title XI Fed- eral Ship Mortgage Guarantee In- surance program has run smooth- ly and effectively. To bring it under control of the Federal Fi- nancing Bank, as now proposed, would only add another "layer of bureaucracy," cause interminable delays, and increase costs in ad- ministering the program.

Albert E. May, vice president of the American Institute of Mer- chant Shipping, the national ship- owner association, testified to this before the House Ways and Means

Committee. He urged that the

Secretary of Commerce under present law, "not be brought within the purview and control" of the Bank, as intended in H.R. 7918 to amend the Federal Fi- nancing Bank Act of 1973.

The Title XI program, estab- lished in 1938 by an amendment to the 1936 Merchant Marine Act, has since been updated a number of times, Mr. May said. "I would state without hesitation," he add- ed, "that Title XI is the single most effective weapon in the Sec- retary of Commerce's arsenal for accomplishing the stated national policy goal set forth in the Act, namely that the United States should have a merchant marine sufficient to meet the needs of na- tional defense and to support the requirements of domestic and in- ternational oceanborne commerce.

Additionally, Title XI guarantees are available to assist in financing the construction of research, in- land, fishing and drilling vessels.

In reviewing the Title XI pro- gram, Mr. May said the ceiling on outstanding Title XI obligations is $7 billion, a modest sum con- sidering the $250 billion total for all federally guaranteed programs. "The program is totally self- sustaining," he noted, "since each recipient of its benefits is re- quired to pay an initial investi- gation fee, as well as an annual guarantee fee for the life of the obligation. These fees are paid into the Federal Ship Financing

Fund which presently has a bal- ance of about $100 million. From this fund are deducted all of the salaries and other expenses in- curred by the Government in ad- ministering the Title XI program, with the balance being available to make payments in the event of default. Since 1938, there have been only 10 defaults, involving a net cost to the fund after re- sale of the vessels totaling $14.6 million. ... It has been run effi- ciently and at no expense to the

American taxpayers. It is not unreasonable, I think, for us to recommend that it remain un- changed."

The national shipping spokes- man said H.R. 7918 would have four effects which, in essence,

The Title XI program, with an unbroken 39-year record of ac- complishment, is completely un- der the control of the Secretary of Commerce and under the pur- view of the Congress, Mr. May pointed out. At no cost to the taxpayer and with minimal risk involved to the government, the

Title XI program has assisted immeasurably in the construction and maintenance of a modern U.S. merchant fleet, has had the flexi- bility to maximize market pres- sures on interest rates, and the means to tailor financing to the needs of the user or the project involved. "The enactment of H.R. 7918, as presently drafted, would seri- ously disrupt this program, would needlessly add an expensive and time-consuming layer of decision- making bureaucracy to the ap- proval and issuance process, and would, by treating Title XI guar- antees as an 'on-budget' item, create an erroneous and inflated impression of federal financing of the maritime industry," Mr. May concluded. "I urge that this meas- ure not be adopted."

Trim and/or Stability (GM), etc., for every type and size of vessel in an entire fleet, all in a single instrument.

One person can operate the in- strument. He can change from one ship type to another by merely flicking a switch. The com- puter is able to cover ships of all classes such as tankers, LNGs, bulk carriers, ro/ros, container and cargo ships, etc. All of the various ship's characteristics are programmed and stored in the

For a complete description of the LOADOSCOPE, Multiship 500, write to Robert M. Kristal,

A single Accu-Roll cable can eliminate rod and crank, long chain and sprocket or cable/pulley systems. At the same time it provides effective system cost reductions through elimination of unneeded accessories and/or components and reduced installation and maintenance costs.