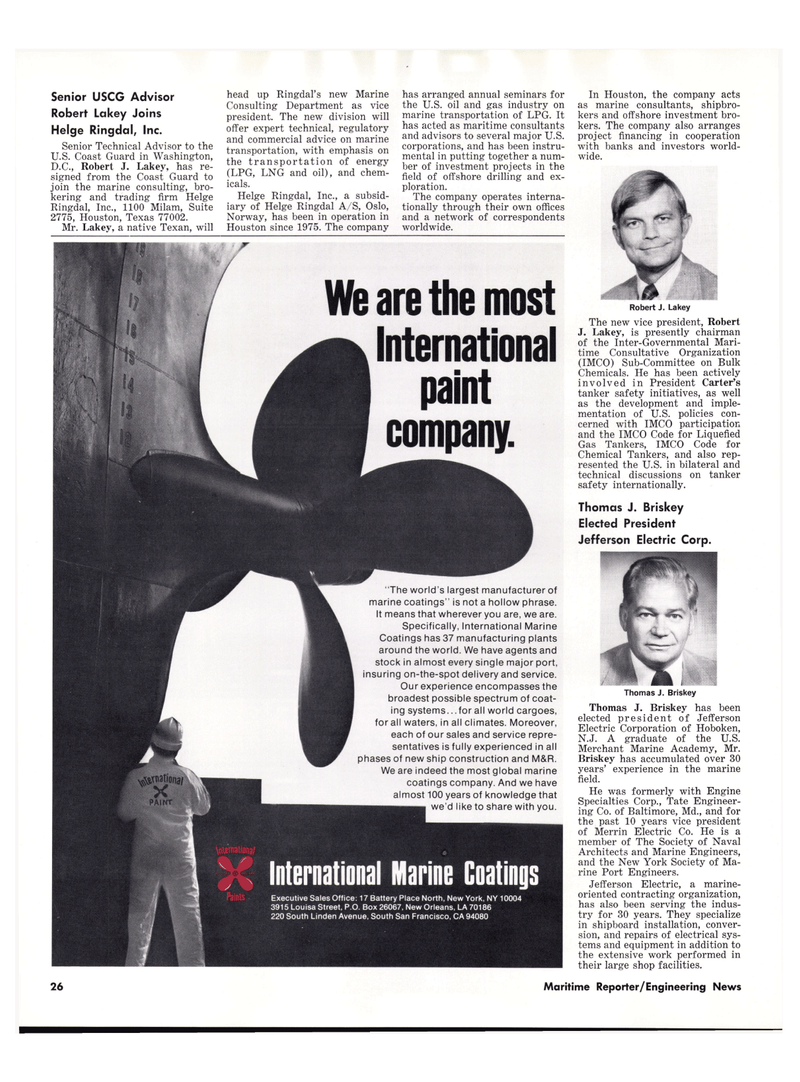 Senior Technical Advisor to the

D.C., Robert J. Lakey, has re- signed from the Coast Guard to join the marine consulting, bro- kering and trading firm Helge

Consulting Department as vice president. The new division will offer expert technical, regulatory and commercial advice on marine transportation, with emphasis on the transportation of energy (LPG, LNG and oil), and chem- icals.

Norway, has been in operation in

Houston since 1975. The company has arranged annual seminars for the U.S. oil and gas industry on marine transportation of LPG. It has acted as maritime consultants and advisors to several major U.S. corporations, and has been instru- mental in putting together a num- ber of investment projects in the field of offshore drilling and ex- ploration.

The company operates interna- tionally through their own offices and a network of correspondents worldwide.

Chemicals. He has been actively involved in President Carter's tanker safety initiatives, as well as the development and imple- mentation of U.S. policies con- cerned with IMCO participation and the IMCO Code for Liquefied

Thomas J. Briskey has been elected president of Jefferson

Briskey has accumulated over 30 years' experience in the marine field.

He was formerly with Engine

Specialties Corp., Tate Engineer- ing Co. of Baltimore, Md., and for the past 10 years vice president of Merrin Electric Co. He is a member of The Society of Naval

Jefferson Electric, a marine- oriented contracting organization, has also been serving the indus- try for 30 years. They specialize in shipboard installation, conver- sion, and repairs of electrical sys- tems and equipment in addition to the extensive work performed in their large shop facilities.

We are the most

X PAINT "The world's largest manufacturer of marine coatings" is not a hollow phrase.

It means that wherever you are, we are.

Coatings has 37 manufacturing plants around the world. We have agents and stock in almost every single major port, insuring on-the-spot delivery and service.

Our experience encompasses the broadest possible spectrum of coat- ing systems.. .for all world cargoes, for all waters, in all climates. Moreover, each of our sales and service repre- sentatives is fully experienced in all phases of new ship construction and M&R.

We are indeed the most global marine coatings company. And we have almost 100 years of knowledge that we'd like to share with you. • * International Marine Coatings