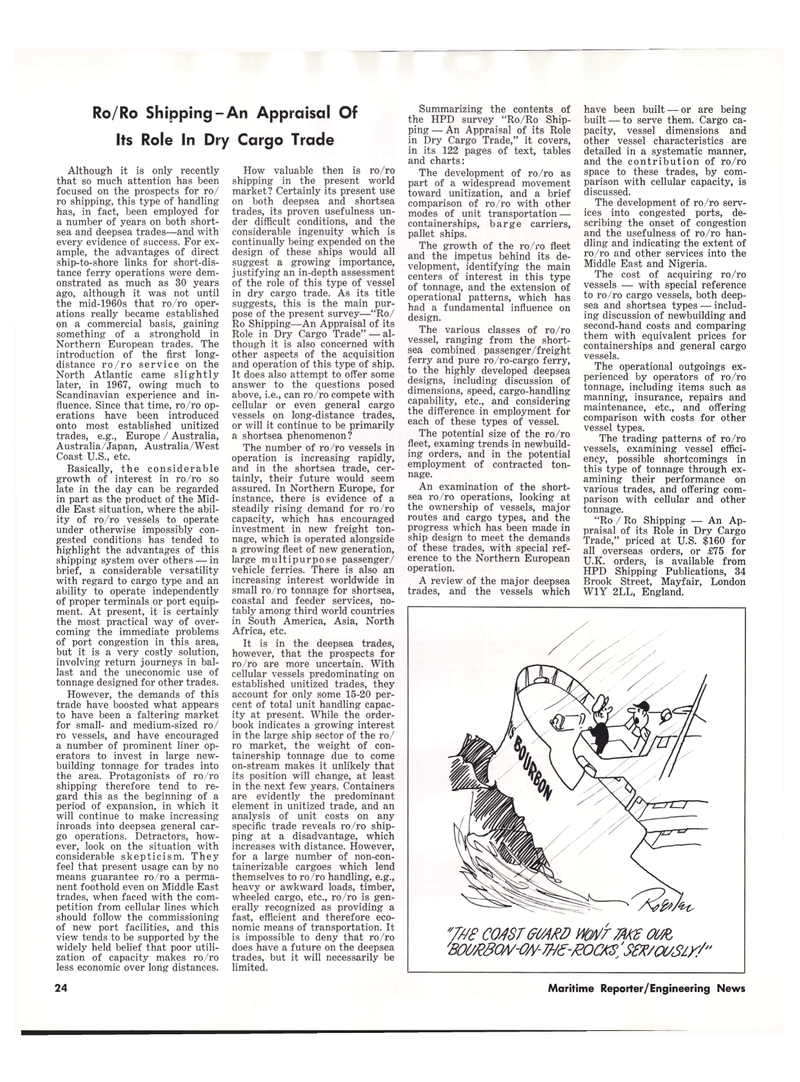 Its Role In Dry Cargo Trade

Although it is only recently that so much attention has been focused on the prospects for ro/ ro shipping, this type of handling has, in fact, been employed for a number of years on both short- sea and deepsea trades—and with every evidence of success. For ex- ample, the advantages of direct ship-to-shore links for short-dis- tance ferry operations were dem- onstrated as much as 30 years ago, although it was not until the mid-1960s that ro/ro oper- ations really became established on a commercial basis, gaining something of a stronghold in

Northern European trades. The introduction of the first long- distance ro/ro service on the

North Atlantic came slightly later, in 1967, owing much to

Scandinavian experience and in- fluence. Since that time, ro/ro op- erations have been introduced onto most established unitized trades, e.g., Europe / Australia,

Basically, the considerable growth of interest in ro/ro so late in the day can be regarded in part as the product of the Mid- dle East situation, where the abil- ity of ro/ro vessels to operate under otherwise impossibly con- gested conditions has tended to highlight the advantages of this shipping system over others — in brief, a considerable versatility with regard to cargo type and an ability to operate independently of proper terminals or port equip- ment. At present, it is certainly the most practical way of over- coming the immediate problems of port congestion in this area, but it is a very costly solution, involving return journeys in bal- last and the uneconomic use of tonnage designed for other trades.

However, the demands of this trade have boosted what appears to have been a faltering market for small- and medium-sized ro/ ro vessels, and have encouraged a number of prominent liner op- erators to invest in large new- building tonnage for trades into the area. Protagonists of ro/ro shipping therefore tend to re- gard this as the beginning of a period of expansion, in which it will continue to make increasing inroads into deepsea general car- go operations. Detractors, how- ever, look on the situation with considerable skepticism. They feel that present usage can by no means guarantee ro/ro a perma- nent foothold even on Middle East trades, when faced with the com- petition from cellular lines which should follow the commissioning of new port facilities, and this view tends to be supported by the widely held belief that poor utili- zation of capacity makes ro/ro less economic over long distances.

How valuable then is ro/ro shipping in the present world market? Certainly its present use on both deepsea and shortsea trades, its proven usefulness un- der difficult conditions, and the considerable ingenuity which is continually being expended on the design of these ships would all suggest a growing importance, justifying an in-depth assessment of the role of this type of vessel in dry cargo trade. As its title suggests, this is the main pur- pose of the present survey—"Ro/

Ro Shipping—An Appraisal of its

Role in Dry Cargo Trade" — al- though it is also concerned with other aspects of the acquisition and operation of this type of ship.

It does also attempt to offer some answer to the questions posed above, i.e., can ro/ro compete with cellular or even general cargo vessels on long-distance trades, or will it continue to be primarily a shortsea phenomenon?

The number of ro/ro vessels in operation is increasing rapidly, and in the shortsea trade, cer- tainly, their future would seem assured. In Northern Europe, for instance, there is evidence of a steadily rising demand for ro/ro capacity, which has encouraged investment in new freight ton- nage, which is operated alongside a growing fleet of new generation, large multipurpose passenger/ vehicle ferries. There is also an increasing interest worldwide in small ro/ro tonnage for shortsea, coastal and feeder services, no- tably among third world countries in South America, Asia, North

It is in the deepsea trades, however, that the prospects for ro/ro are more uncertain. With cellular vessels predominating on established unitized trades, they account for only some 15-20 per- cent of total unit handling capac- ity at present. While the order- book indicates a growing interest in the large ship sector of the ro/ ro market, the weight of con- tainership tonnage due to come on-stream makes it unlikely that its position will change, at least in the next few years. Containers are evidently the predominant element in unitized trade, and an analysis of unit costs on any specific trade reveals ro/ro ship- ping at a disadvantage, which increases with distance. However, for a large number of non-con- tainerizable cargoes which lend themselves to ro/ro handling, e.g., heavy or awkward loads, timber, wheeled cargo, etc., ro/ro is gen- erally recognized as providing a fast, efficient and therefore eco- nomic means of transportation. It is impossible to deny that ro/ro does have a future on the deepsea trades, but it will necessarily be limited.

Summarizing the contents of the HPD survey "Ro/Ro Ship- ping — An Appraisal of its Role in Dry Cargo Trade," it covers, in its 122 pages of text, tables and charts:

The development of ro/ro as part of a widespread movement toward unitization, and a brief comparison of ro/ro with other modes of unit transportation — containerships, barge carriers, pallet ships.

The growth of the ro/ro fleet and the impetus behind its de- velopment, identifying the main centers of interest in this type of tonnage, and the extension of operational patterns, which has had a fundamental influence on design.

The various classes of ro/ro vessel, ranging from the short- sea combined passenger/freight ferry and pure ro/ro-cargo ferry, to the highly developed deepsea designs, including discussion of dimensions, speed, cargo-handling capability, etc., and considering the difference in employment for each of these types of vessel.

The potential size of the ro/ro fleet, examing trends in newbuild- ing orders, and in the potential employment of contracted ton- nage.

An examination of the short- sea ro/ro operations, looking at the ownership of vessels, major routes and cargo types, and the progress which has been made in ship design to meet the demands of these trades, with special ref- erence to the Northern European operation.

A review of the major deepsea trades, and the vessels which have been built — or are being built — to serve them. Cargo ca- pacity, vessel dimensions and other vessel characteristics are detailed in a systematic manner, and the contribution of ro/ro space to these trades, by com- parison with cellular capacity, is discussed.

The development of ro/ro serv- ices into congested ports, de- scribing the onset of congestion and the usefulness of ro/ro han- dling and indicating the extent of ro/ro and other services into the

The cost of acquiring ro/ro vessels — with special reference to ro/ro cargo vessels, both deep- sea and shortsea types — includ- ing discussion of newbuilding and second-hand costs and comparing them with equivalent prices for containerships and general cargo vessels.

The operational outgoings ex- perienced by operators of ro/ro tonnage, including items such as manning, insurance, repairs and maintenance, etc., and offering comparison with costs for other vessel types.

The trading patterns of ro/ro vessels, examining vessel effici- ency, possible shortcomings in this type of tonnage through ex- amining their performance on various trades, and offering com- parison with cellular and other tonnage. "Ro / Ro Shipping — An Ap- praisal of its Role in Dry Cargo

U.K. orders, is available from