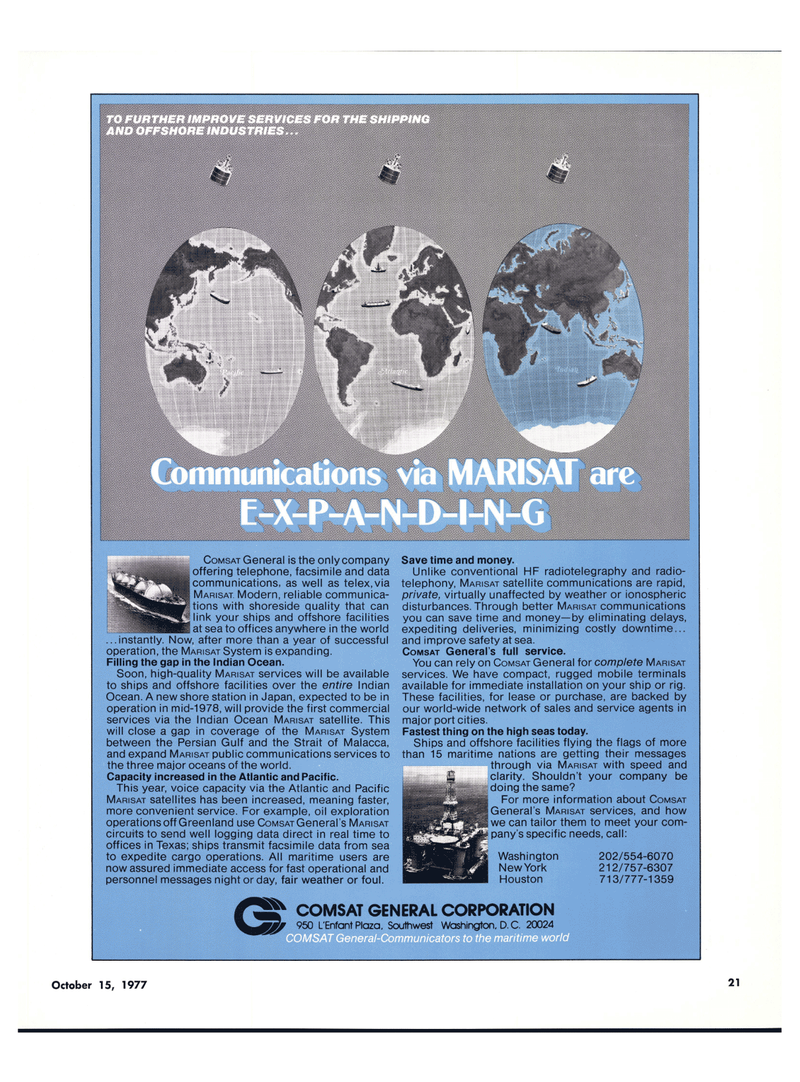 COMSAT General is the only company

I offering telephone, facsimile and data

I communications, as well as telex, via

MARISAT. Modern, reliable communica- tions with shoreside quality that can link your ships and offshore facilities

I at sea to offices anywhere in the world ...instantly. Now, after more than a year of successful operation, the MARISAT System is expanding.

Filling the gap in the Indian Ocean.

Soon, high-quality MARISAT services will be available to ships and offshore facilities over the entire Indian

Ocean. A new shore station in Japan, expected to be in operation in mid-1978, will provide the first commercial services via the Indian Ocean MARISAT satellite. This will close a gap in coverage of the MARISAT System between the Persian Gulf and the Strait of Malacca, and expand MARISAT public communications services to the three major oceans of the world.

Capacity increased in the Atlantic and Pacific.

This year, voice capacity via the Atlantic and Pacific

Save time and money.

You can rely on COMSAT General for complete MARISAT services. We have compact, rugged mobile terminals available for immediate installation on your ship or rig.

These facilities, for lease or purchase, are backed by our world-wide network of sales and service agents in major port cities.

Ships and offshore facilities flying the flags of more than 15 maritime nations are getting their messages through via MARISAT with speed and clarity. Shouldn't your company be doing the same?

For more information about COMSAT | General's MARISAT services, and how

I we can tailor them to meet your com- | pany's specific needs, call:

COMSAT General-Communicators to the maritime world