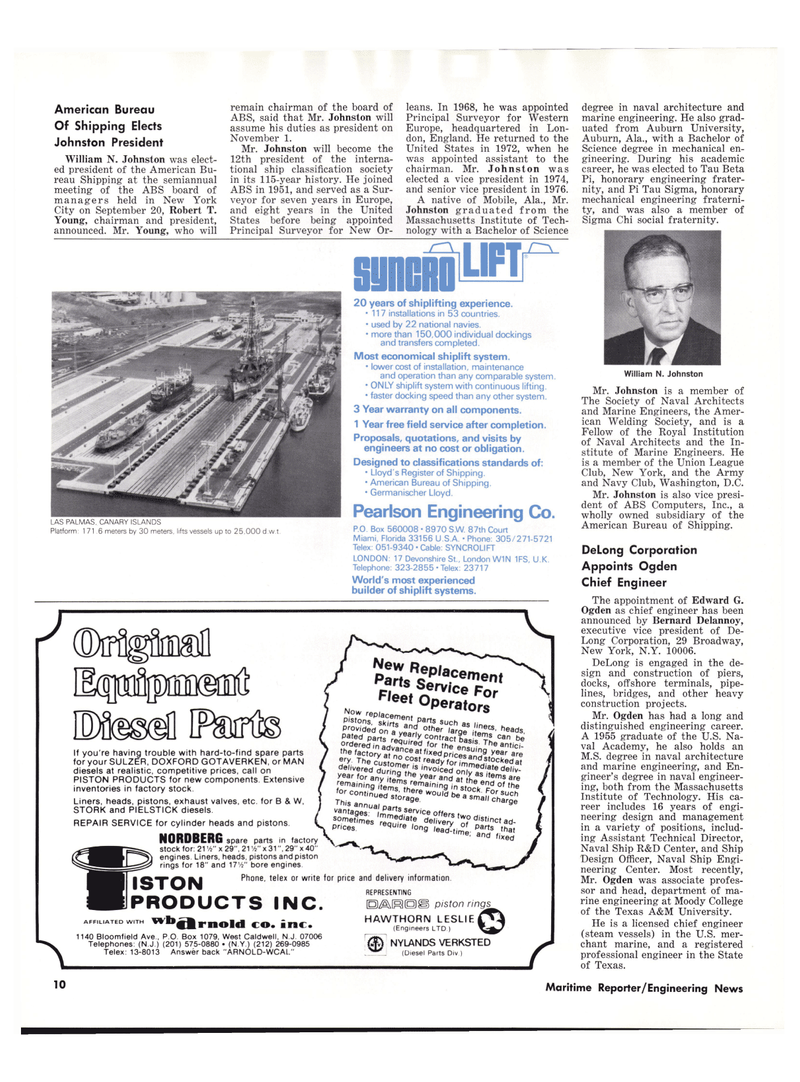 William N. Johnston was elect- ed president of the American Bu- reau Shipping at the semiannual meeting of the ABS board of managers held in New York

Young, chairman and president, announced. Mr. Young, who will remain chairman of the board of

ABS, said that Mr. Johnston will assume his duties as president on

Mr. Johnston will become the 12th president of the interna- tional ship classification society in its 115-year history. He joined

ABS in 1951, and served as a Sur- veyor for seven years in Europe, and eight years in the United

States before being appointed

Principal Surveyor for New Or- leans. In 1968, he was appointed

Europe, headquartered in Lon- don, England. He returned to the

Johnston graduated from the

Massachusetts Institute of Tech- nology with a Bachelor of Science

Most economical shiplift system. • lower cost of installation, maintenance and operation than any comparable system. • ONLY shiplift system with continuous lifting. • faster docking speed than any other system. 3 Year warranty on all components. 1 Year free field service after completion.

Proposals, quotations, and visits by engineers at no cost or obligation.

If you're having trouble with hard-to-find spare parts for your SULZER, DOXFORD GOTAVERKEN, or MAN diesels at realistic, competitive prices, call on

Phone, telex or write for price and delivery information.

Auburn, Ala., with a Bachelor of

Science degree in mechanical en- gineering. During his academic career, he was elected to Tau Beta

Mr. Johnston is a member of

The Society of Naval Architects and Marine Engineers, the Amer- ican Welding Society, and is a

Fellow of the Royal Institution of Naval Architects and the In- stitute of Marine Engineers. He is a member of the Union League

The appointment of Edward G.

Ogden as chief engineer has been announced by Bernard Delannoy, executive vice president of De-

DeLong is engaged in the de- sign and construction of piers, docks, offshore terminals, pipe- lines, bridges, and other heavy construction projects.

Mr. Ogden has had a long and distinguished engineering career.

He is a licensed chief engineer (steam vessels) in the U.S. mer- chant marine, and a registered professional engineer in the State of Texas. 10 Maritime Reporter/Engineering News