Mr. Lakey, a native Texan, will head up Ringdal's new Marine Consulting Department as vice president. The new division will offer expert technical, regulatory and commercial advice on marine transportation, with emphasis on the t r a n s p o r t a t i o n of energy (LPG, LNG and oil), and chemicals.

Helge Ringdal, Inc., a subsidiary of Helge Ringdal A/S, Oslo, Norway, has been in operation in Houston since 1975. The company has arranged annual seminars for the U.S. oil and gas industry on marine transportation of LPG. It has acted as maritime consultants and advisors to several major U.S.

corporations, and has been instrumental in putting together a number of investment projects in the field of offshore drilling and exploration.

The company operates internationally through their own offices and a network of correspondents worldwide.

In Houston, the company acts as marine consultants, shipbrokers and offshore investment brokers.

The company also arranges project financing in cooperation with banks and investors worldwide.

The new vice president, Robert J. Lakey, is presently chairman of the Inter-Governmental Maritime Consultative Organization (IMCO) Sub-Committee on Bulk Chemicals. He has been actively involved in President Carter's tanker safety initiatives, as well as the development and implementation of U.S. policies concerned with IMCO participation and the IMCO Code for Liquefied Gas Tankers, IMCO Code for Chemical Tankers, and also represented the U.S. in bilateral and technical discussions on tanker safety internationally. 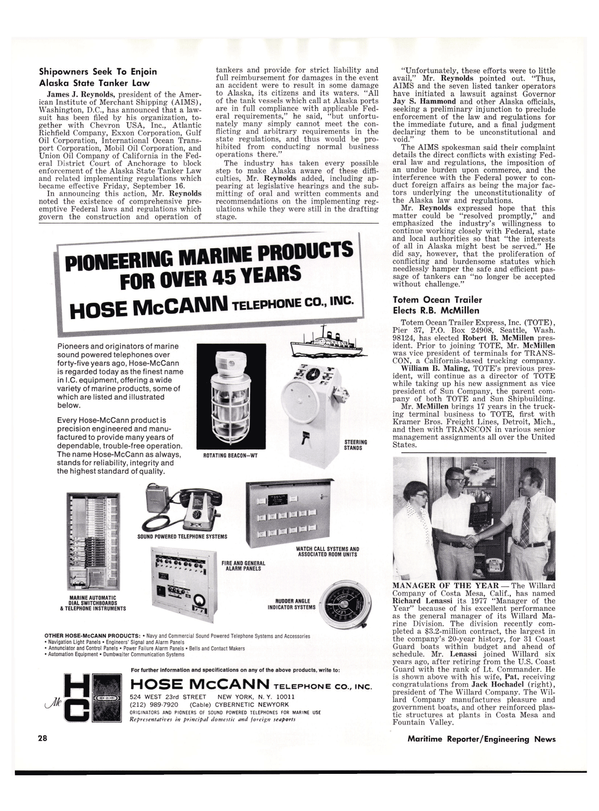